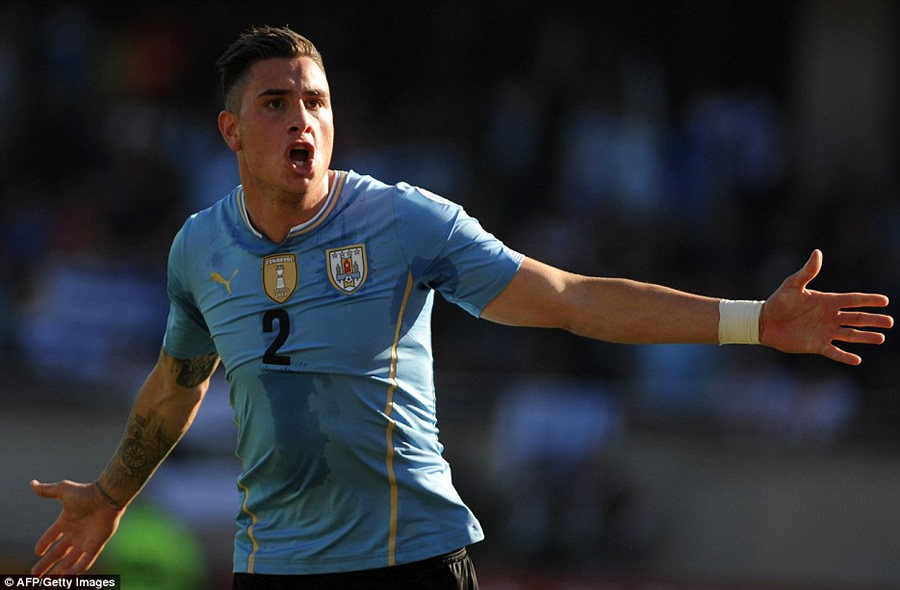 Coming into Saturday afternoon’s clash with Paraguay, Uruguay had played alright in the group stage, but lacked the offensive firepower to make them, in my eyes, a legitimate contender to defend their Copa América title. After the 1-1 draw against the “Other Guays,” Uruguay moved on as one of the third place teams, but those very same questions still linger. Let’s review the particulars, and project the rest of the tourney for La Celeste.

I’ll set the scene for you guys, for full effect. My whole family got together as our “in case it rains on Father’s Day” Father’s Day celebration and Uruguay-watching extravaganza. It was me, my parents, my brother, my sister, and their combined four kids, all stuffed into my dad’s attic bedroom. We had our uruguayan bizcochos at the ready and some of us had jerseys on to boot. The kids were running around and making noise. It felt, as my brother put it, like we were in the stands at a Villa Teresa game, but without all the spitting.

Anyway, it seems head coach Óscar Tabárez listened to my pleas, because he started both Abél Hernández and Carlos Sánchez. He also shook things up by keeping Diego Rolán in the lineup, and going with a three-pronged attack, as opposed to the normal two-man forward team of Rolán and Edinson Cavani. He also made a change in the defense, as Sebastián Coates played too, but that was just because all-world defender Diego Godín was suspended after picking up two yellow cards in as many games.

Things started out well for the Uruguayan attack, as they had several chances early, but without the finishing power up front (we miss you so much, Luisito!), most of those chances went without the payoff of a goal being scored. That being said, Cavani actually showed up to this game, and was pretty well involved in the offense. He hasn’t quite remembered how to finish like he did all season long for PSG yet, but at least he remembered to be on the field. It’s a step forward. We’ll talk more about that later though.

In the 28th minute, Uruguay finally broke through on another set piece. As in the Jamaica game, defender José María Giménez and his head were involved. Against the reggae Boyz, the Atlético Madrid center back headed a free kick down to Cristian Rodríguez, who scored the eventual game winner. Against Paraguay, Giménez left nothing to chance, hammering home a header off of a beautifully placed corner kick from Sánchez. The 20-year old Giménez is on his way to becoming a real stud for this team, and I think we’ll be lauding his talents for the next three World Cup cycles. He’s awesome.

Uruguay had more chances throughout the half, pretty much dominating the pace of the match. Also, Paraguay basically showed nothing. I don’t know how Argentina, with the talent they have, didn’t roll over this team. They looked old, fat and tired all game long… except for in the 44th minute. Off of a corner kick, Lucas Barrios headed home a wide open equalizer. It was a last minute defensive lapse–something Uruguay seems to constantly be plagued with when it faces los Guaranies.

The second half featured more of the same, as Uruguay had some good chances, but couldn’t hammer them home. Cavani barely missed a couple of solid, but very difficult, opportunities. Christhian Stuani continued his run of missing open chances as well, so it’s nice that he’s able to be so consistent. The difference in the second half was that Paraguay completely ran out of energy. Three different players (Raúl Bobadilla, Néstor Ortigoza and Barrios) had to leave the match with apparent hamstring injuries–get a treadmill and some water for the training facilities, please–and their attack completely disappeared after the 70th minute or so. Seriously, how did Argentina not crush them?

Anyway, the tie was good enough to get Uruguay to the round of eight. It also puts them in a matchup against host nation Chile, who just throttled Bolivia 5-0 to win their group. This is a bit of an intimidating matchup. Chile’s attack has looked great so far, as they beat Ecuador 2-0 and had a thrilling 3-3 tie against Mexico–with two goals questionably disallowed–before beating down the Bolivians. Now, granted, none of those teams have the defensive reputation that Uruguay does, especially with Godín once again available, but I get the feeling that one goal will not be enough if the Celestes want to eliminate the hosts for the second Copa in a row.

Last time, we demanded that Hernández get the start over Rolán. Hernández did play, but so did Rolán, which left the team without Nicolás Lodeiro there to create the plays for the strikers. Also, Hernández played like crap. I think I’d like to see the youngsters Jonathan Rodríguez and Giorgian De Arrascaeta get some run, but I don’t think Tabárez will be willing to test them out in an elimination game. I was very encouraged by Cavani’s performance against Paraguay. Like I said, he finally got forward and had a couple of chances. They really need him to start scoring if they’re going to beat Chile though.

I don’t think Uruguay can win this tournament if they keep doing what they’re doing, but every game they make it to means one less game left for Luis Suárez to sit out, so I’m hoping they can find something deep down to get them through to the semifinals.

Here are the full highlights, including when the guy in the production truck fell asleep and we missed an almost goal: