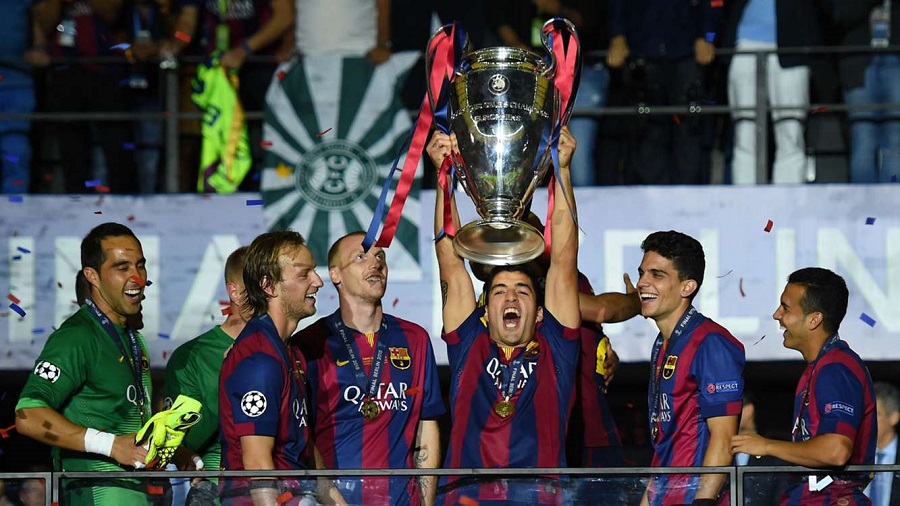 Ten months ago, it looked like FC Barcelona had bought themselves an €150 million headache: the team had just paid Liverpool €76 million for the privilege of signing Luis Suárez, and agreed with the disgraced Uruguayan striker on a 5 year contract worth €10 million a year, plus bonuses. Suárez would not even be able to play for the first 3 months of the deal because of his FIFA ban; he was a repeat offender, seemingly  unable to keep himself under control when the stakes were highest. There were questions about how he would fit into a stacked forward line featuring the  world’s best player, Lionel Messi, and up-and-coming megastar Neymar. The aging squad had finished a season title-less for the first time since 2007-08 and the rumor mill was hard at work finding a replacement for embattled second year coach Luis Enrique.

Barcelona answered all those questions and more, crowning one of the best seasons in club history with a hard-fought 3-1 win against Juventus in the Champions League final. The victory sealed the Blaugrana’s second ever CL/League/Cup treble (no other team has ever done it more than once), and re-established them as the best team in the world. And Suárez was right in the middle of it: after sitting out the season’s first month and a half, he slowly integrated himself into the team, first as a general offensive nuisance and assist collector, and eventually as one of the cogs that make this squad go. The Messi/Suárez/Neymar forward line (known in Spain as “El Tridente”  or “MSN”) scored a grand total of 122 goals this season, with 25 of those coming from the Uruguayan: 16 in the league, 2 in the Copa del Rey, and 7 in the Champions League. Suárez also scored some of the biggest goals of Barca’s dream season, like the game winner in the season’s second Clásico, which gave the team a clear path to the Liga title. He nipped consecutive CL ties in the bud, netting road doubles in the first legs of both the round of 16 (against Manchester City) and the quarterfinals (facing PSG). And yet he saved his best for last.

The game started with Juventus pushing forward and generating a couple of early chances, but it only took 4 minutes for Barcelona to assert itself. A long cross to the left wing by Messi found Jordi Alba, who played it into the box for Neymar. The Brazilian overplayed the first touch, but recovered quickly and made his way towards goal. His perfectly placed pass found Andrés Iniesta streaking through the middle, and the ageless midfielder pushed the ball towards Ivan Rakitic, who beat keeper Gianluigi Buffon (talk about ageless!) from short range. It felt like the game was over at that point, and more so as Barcelona immediately took over possession form the rattled Italians, who nearly went down a man: Chilean midfielder Arturo Vidal decided the way to stop Barcelona was to scythe players from behind and shove them around after the whistle, but only received a yellow card for his efforts (I counted 3 brutal tackles and 2 separate extracurricular incidents in about 10 minutes). Still, Juventus would not lay down and managed to keep the game within reach, mainly thanks to Buffon.

Look, at the highest levels of international soccer, it’s hard to stay competitive past your early 30s (although it’s a little easier for goalies). In this game alone, Andrea Pirlo showed that he could no longer keep up with Barcelona’s attack, while Xavi wasn’t even good enough to crack the Culé starting lineup in his last game ever (though he did come in for the last 10 minutes). Buffon, however, was as good as ever, stoning Dani Alves and Suárez on consecutive attacks to keep Italian hopes alive. The save on Alves was amazing: as he was diving right, Buffon stuck his left hand back to punch the ball away. So Barcelona was up at the half, but it felt like they should have done more and that Juventus was still very much in it.

The second half started with Barcelona building on their momentum, but still unable to pierce the Juventus goal line. 10 minutes in, however, the Italians managed to tie the game against the run of play thanks to some Barcelona-like ball teamwork. Claudio Marchisio sent Stephan Lichtsteiner through down the right side with a beautifully cheeky backheel. The Swiss defender sent a low ball into the box for Carlos Tevez, whose quick turnaround shot was too tough for Marc-André ter Stegen. The ball rebounded off the keeper’s hands right to semifinal hero Alvaro Morata, who slotted it home. The man who eliminated Real Madrid (the team where he started his career) had now dealt a tough blow to the Merengues’ hated rivals.

From that point on it looked as if Juventus would be able to pull off the upset, as Barcelona lost their nerve and ceded possession. But just when the sky was at its darkest, The Tridente stepped up. In the 65th minute, Messi made a dazzling run into the heart of the Juve defense and took a shot on goal. Just like Ter Stegen earlier, Buffon could not control the ball, which bounced towards the right side of the box. For a moment it looked as if Rakitic would have a historic double; then Patrice Evrà looked to play the part of savior as he ran in from the middle; but neither man would get there in time. The Gunslinger was first on the scene, racing past the Frenchman and stepping in front of Rakitic to put the ball in the back of the net and give Barcelona the lead. It was yet another case of right place, right time for Suárez, whose off-the-ball positioning ability may have no equal.

Neymar nearly added a third goal shortly after, but his unfortunate header went off his own hand and into the goal. After that Juventus pushed forward for the equalizer, while Barcelona waited for a counter opportunity. Both teams could easily have scored, but neither managed to do it until the very last play of the game, when Neymar finally got his goal. By that time Suárez, who in those last 20 minutes was beaten black and blue by the Juve defense, had given way to Pedro, and Iniesta had surrendered both his spot in the lineup and the captain’s armband to Xavi.

Barcelona management thought the team needed a little something extra up front after last season’s disappointment, and bet on Suárez to provide it; it took the Uruguayan some time to get up to speed, but in the end he was at his deadliest when it mattered most. He made a wager of his own, going from a team where he was the undisputed star and focal point of  the attack to one where he would have to fit in with a very different approach, where he would have to defer to players like Messi, Iniesta, and even Neymar. The end result was a dream season: two domestic titles and one of the most impressive Champions League campaigns ever; in all the Blaugrana faced 6 opponents, all defending champions of their respective leagues. They started with Apoel Nicosia (Cyprus), Ajax (Netherlands), and PSG in the group stage, and then faced the best of the best in the playoff rounds: Manchester City, PSG again, Bayern Munich, and Juventus missing only reigning Spanish titleholders Atlético Madrid (although they did beat them in the Copa del Rey semis anyway). And this is only the beginning: they get to try to do it all again next season, starting with an August 11th European Supercup matchup against Europa League winners Sevilla. Here’s hoping they keep winning. Visca Barca!