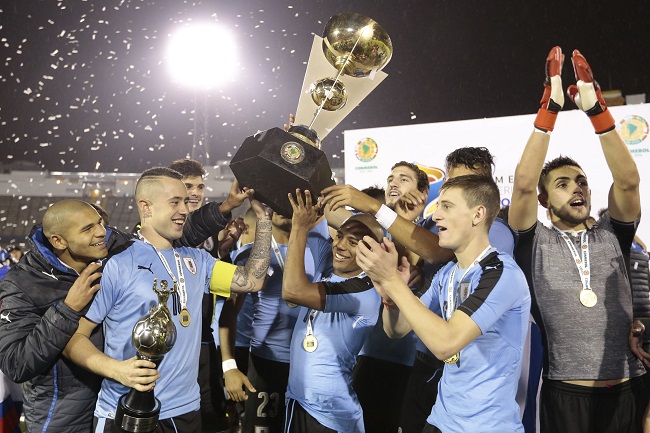 Hello fans! It’s El Bolso again. I’ll be honest, I was not expecting to have to write a post about the CONMEBOL U20 South American Championship that just took place in Ecuador. I was sure Uruguay would have a strong performance, lock up a spot in yet another U20 World Cup, and that would be that. Yawn… Then the Celestes went out and won the whole… fuckin’… thing, and here we are. Let’s get to it! 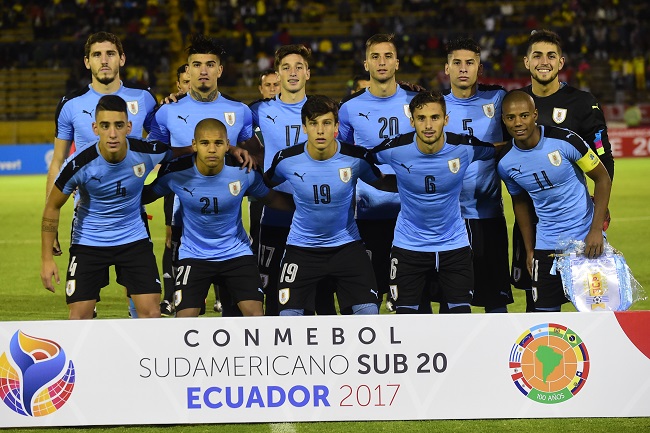 Once upon a time, the Celestes were the team to beat in U20 CONMEBOL tournaments. They won the very first one in 1954, then took the next 2 in ’58 and ’64. After letting other teams win the next 3 (probably so CONMEBOL wouldn’t just cancel the whole tournament out of spite) they won the next 4, in ’75, ’77, ’79, and 81. Up to that point Uruguay had won 7 of the 10 titles and looked near unbeatable. Then… the 80s happened. Politics took over AUF, investment in development fizzled out, and the Celeste youth teams stopped winning trophies. Oh sure, Uruguay remained a player in the South American scene, grabbing a handful of 2nd and 3rd places, but never again did they manage to finish on top. Brazil took over as the big bad, winning 10 of the next 16 trophies.

As the teams gathered in Ecuador, there was optimism that the team would do well, but win the title? That seemed like too much to ask. The Celestes didn’t have a great start, managing a scoreless tie with Venezuela (thanks to a missed penalty kick) and a 3-3 tie against Argentina, in a game Uruguay led 3 separate times. With 2 points in their first 2 games, Uruguay needed some wins to finish in the top 3 in their group and move on to the final round. The team seemed to take things to a new level, beating Peru 2-0 and Bolivia 3-0 to finish in first place with 8 points. 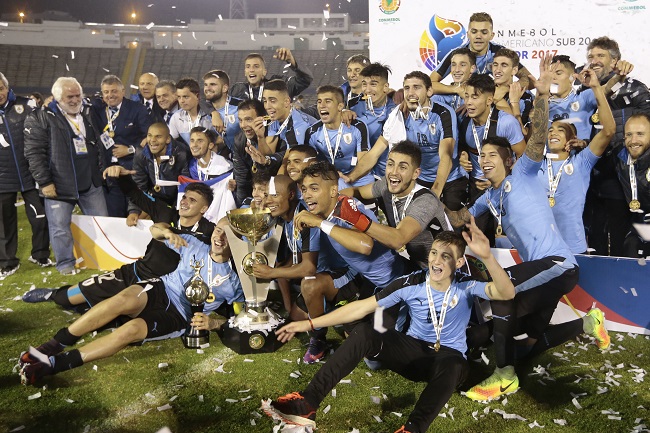 The Celestes kept right on truckin’ in the final round. They opened with a 3-0 thumping of Argentina, a game that was pretty evenly matched until Argentinian Tomás Belmonte decided to do this, and was promptly sent off by the referee. Uruguay then rallied for a 2-1 come-from-behind win over Brazil, a win sealed on a last-play strike after the Brazilians had lost 2 players to red cards. In round 3, the Celestes thumped Colombia 3-0, clinching a World Cup berth and opening up a 5 point lead on the second place teams (with 9 points left to play). They could have been champions with a win in their next game, but they were thoroughly outplayed by Venezuela, losing 3-0 to La Vinotinto (their only loss of the tournament). Venezuela was the only team Uruguay did not beat at least once.

The loss set up a tough final round: Uruguay needed a win against host Ecuador to clinch, or else a tie and for Venezuela not to win their game against Argentina. The Albiceleste did its job, holding the Venezuelans to a tie, so the tournament’s last game would decide the champion: Uruguay needed a win or a tie, while host Ecuador had to win or else. The Celestes wasted no time, as forward Joaquín Ardaiz stole an errant pass from the Ecuadorian defense and opened the scoring just 4 minutes in. Ardaiz himself doubled the advantage 20 minutes later as Uruguay went into the break up by 2 goals. Ecuador stole one back off a long pass that befuddled keeper Santiago Mele, but that was pretty much the only clear chance Ecuador managed in the second half. Uruguay held on for the 2-1 win and their first title in 36 years.

The final tally for the Celestes: 6 wins, 2 ties, 1 loss. They scored 18 goals (tied with Ecuador for most in the tournament) and allowed only 8. Nacional forward Rodrigo Amaral tied for the tournament lead with 5 goals, but the key to Uruguay’s campaign was the ability of coach Fabián Coito to rotate players to avoid altitude fatigue and mitigate suspensions: Neither Amaral nor fellow starting forward Nicolás Schiappacasse started the final game, and it didn’t matter one bit. Every time the Celestes had to do without a player, someone else stepped up without team play suffering.

All of that is to say, Uruguay is once again the king of South American youth soccer. Arriba muchachos!

All images courtesy of Teledoce.com.