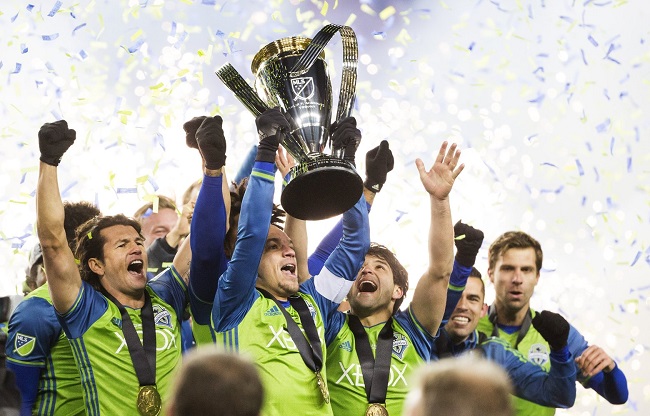 Hello fans! El Bolso is back one more time. It seems like just yesterday I wrote all about Nacional winning the Uruguayan League (actually it was the day before yesterday), but they were not the only team to acquire new hardware over the weekend. The MLS Cup also took place, a game that is more closely related to my beloved Tricolores than you probably know. Let’s get right to it!

The 2016 MLS Cup featured 2 teams that could not possible have gotten there in different ways. Both Toronto FC and Seattle Sounders were at one point expansion teams (the former in 2007, the latter in 2009) and were making their first appearances in the title game, but the similarities end right there: while the Sounders have been one of the league’s better teams pretty much since they joined, Toronto have been a middling club that is usually found at the bottom of the league table.

This season was a complete reversal of that history, however: the Canadian club, buoyed by homegrown talent like Jozy Altidore and Michael Bradley, have been one of the Eastern Conference’s top teams, fighting the 2 New York clubs for the top spot (they finished in 3rd place, just 1 point behind NYCFC). They then beat Philly 3-1 in the play-in game, and took NYCFC apart in the Conference semifinals (beating them 2-0 and 5-0). Facing fellow Canadians Montreal Impact in the conference finals, they lost 3-2 on the road and won by the same score in regulation at home, then scored 2 more times in overtime to win the bracket by a 7-5 aggregate score. Going into the finals they were heavy favorites.

Rising from the Ashes

Seattle, meanwhile, spent the first half of the season trying to stay out of last place in the Western Conference. They were so bad they decided to fire coach Sigi Schmid in July, replacing him with Brian Schmetzer. It didn’t look as if the new head man would have the horses to turn this team around, but on July 27th the Sounders made the move that turned the 2016 MLS season on its head, signing Uruguayan international and former Nacional star Nicolás Lodeiro. Nico has been around for a 27-year-old: he started his career with the Tricolores, then moved to Dutch side Ajax. After a couple of seasons there he spent some time in Brazil, playing for Botafogo and Corinthians, before finding a home with Argentinian powerhouse Boca Juniors. Lodeiro has also been a fixture on the Uruguayan National team, wearing the storied Celeste in 2 World Cups, 3 Copa Americas, an Olympic tournament and a Confederations Cup. He won league titles in all 4 countries he played in before this latest move and was eager to make it 5 for 5 here, although the odds were long.

The move to MLS had been talked about for months, as Lodeiro knew about the Sounders from former Nacional and 2010 World Cup teammate Álvaro Fernández. El Flaco (the skinny one, because, well, look at the man) was a popular Sounders player earlier in his career, helping the team to consecutive Lamar Hunt US Open Cup titles in 2010 and 2011, and it’s rumored that he sold Lodeiro hard on playing in the Pacific Northwest. So hard, in fact, that he evidently sold himself on the idea as well: he ended up signing with Seattle the day after Nico. Seattle now had 2 Uruguayans on their roster, both members of Nacional’s 2008/09 Uruguayan league champions as well as the Uruguay team that placed 4th in the 2010 World Cup (Lodeiro had a brief shining moment there, assisting THE BEST GOD DAMN PLAYER IN THE WHOLE WORLD on his second round game winner against South Korea). I shouldn’t even have to tell you that the Sounders instantly became El Bolso’s favorite MLS team.

Still, it didn’t look good for Nico and El Flaco. Here’s what the Western Conference standings looked like on July 24th:

Yep. One point away from last place. Top 6 teams make the playoffs, so Seattle was a full 10 points from the last conference postseason berth, having won just 6 out of their first 20 games. Yikes! The team immediately went on a tear, though: after a July 31st 1-1 tie against the Galaxy, they won their next 3 games before tying on the road against the under-powered Dynamo (hah?). Overall, Seattle finished the season by winning 8 of their last 14 games, tying 4 and losing only 2, snagging the 4th seed in the Conference. Now, was it all due to Nico and El Flaco? Well, certainly not El Flaco; he was a force in his first run with the club but is now pretty much running on fumes. Nico, however, quickly became one of the league’s best players. His soft touch and ability to see the entire field served him and his team well, opening up scoring lanes and giving opposing defenses headaches. Look, fans, this is a guy who is in his prime and starts for a national team that’s spent pretty much his entire career in the Top 10 of FIFA’s ranking. The man came, he saw, and he damn well conquered.

The Sounders didn’t slow down in the playoffs, either: they beat Sporting KC 1-0 in the play-in game, then beat top seed Dallas FC 3-0 at home thanks to 2 second half Lodeiro goals. That was enough to put them in the Conference finals despite a 2-1 loss in the return game (Lodeiro scored that goal, too). Down 1-0 to the Rapids at home, they recovered to win 2-1 (Lodeiro scored the winner in the 61st minute), then went into Denver (well, technically Commerce City) and won the return leg 1-0; that was Colorado’s only loss at home in the entire season. And just like that, what at one point looked to be the worst team in Sounders history was one game away from winning the whole… fuckin’… thing.

One for the Thumb

The game itself was pretty boring. Game time temperatures in Toronto hovered around the low 20s, and I guess that made everyone a step slow? Toronto was clearly the better team, but only managed a few chances. On the other side of the field Lodeiro just could not find his rhythm, and as he goes so does the Sounders’ offense: Seattle registered no shots on goal the entire game. A scoreless 90 minutes was followed by an also barren 30 minute overtime, although Toronto had one shining chance in the 108th minute: Altidore got his head on a cross and sent it to his far post, at which point Seattle keeper Stefan Frei used his freaking Jedi mind powers to keep the ball from going in. Holy crap just look at that save!

Anyway, the game went to penalty kicks. Both teams made their first shots, but then Bradley’s excuse-me tapper was saved by Frei (which El Bolso loved, because I hate that dirty, talent-less sack of bald crap). The euphoria didn’t last long, though; as soon as I saw El Flaco (who subbed into the game in the second half) walking up to take Seattle’s third kick I knew there would be trouble. I’m not sure why he was in the first five; anyone who watched the game could see that he just didn’t have it. Flaco telegraphed his soft kick, which was easily saved by Toronto keeper Clint Irwin. The next 3 kicks all went in, which meant Lodeiro needed to make his (the last shot of the initial round) to force sudden death. Of course he did, smashing a perfect kick into Irwin’s top right corner; the man who had dragged the Sounders all the way to the Cup Final was not about to cost them the title. So on we went to sudden death PKs, although we would not have to suffer for long: Justin Morrow hit the crossbar with the very next shot, and Panamanian defender Román Torres calmly put his in the net to give the Nico and the Sounders (what a great band name!) their first MLS Cup title.

And there you have it, folks. Lodeiro got his title. The Sounders are MLS Champions in a most unexpected way, and they have one of Nacional’s homegrown players to thank for it. And El Bolso got to have a pretty damn good weekend. Everyone wins! Except Michael Bradley, that is. As Nelson Muntz would say, Ha-Ha! And that is all for me. Happy holidays, fans!