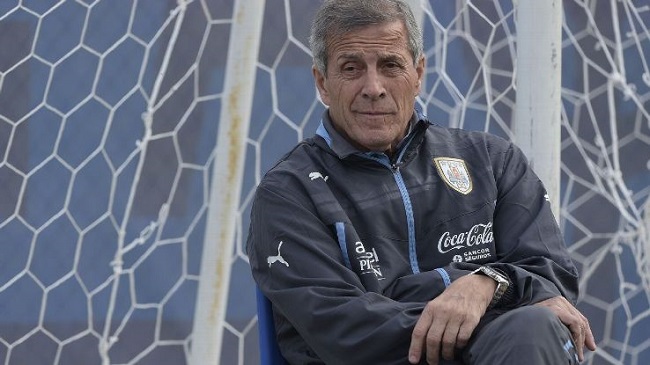 Hello fans! It’s El Bolso with another 2018 World Cup Qualifying update! Uruguay faced a crucial home match against Ecuador yesterday. A win would bring them that much closer to their dream of missing out on the Intercontinental Playoff round. Did they do it? Let’s find out!

Uruguay came into this 11th round of the qualifiers in second place in the overall table, mostly due to their strong play at home. Long known for giving away winnable points at home and stealing impossible ones abroad, the Celestes have not followed that trend so far. I’ve talked about the stats before, but let’s recap: 5 home games, 5 wins, 14 goals for, none against. They haven’t been bad on the road at all (1 win, 2 ties, 2 losses), but the home play is what’s carrying the day right now. And look, that may seem logical to you, but to seasoned Celeste fans everywhere that’s as inconceivable as, oh, I don’t know, Donald Trump getting elected President! Just think about how ridiculous that sounds!

Well anyway, with the Celestes holding a 4-point cushion on 6th place (3 points over the IC playoff-bound 5th spot), you can imagine how badly we wanted a win in this game. Get these 3 points (and snag a tie next week in Chile) and Uruguay fans could at least start thinking about vacations in Putin land.

One more thing: you may have noticed the new cover photo, as well as the heavy Óscar Tabárez theme to this post. There’s a reason for that: last night El Maestro (the Teacher) coached his 168th game with La Celeste. That probably sounds like a lot to you, and it should: it is the most games anyone has ever coached as head of a single national team. Now, I didn’t say the most games as Uruguay coach; I mean the most games of any national team. Sepp Herberger led Germany for 167 games between 1936 and 1964, and Morten Olsen clocked 166 games with Denmark between 2000 and 2015. Tabárez has topped them both, and in the process took the record away from an actual member of the Nazi party. Well done El Maestro!

There’s a popular saying in soccer circles: “jugamos como nunca, perdimos como siempre.” It translates as “we played better than ever before, but we lost like we always do.” Uruguayans have made ample use of that phrase over the last few decades, because it seems like the team always manages to give away points in games where they are clearly the better team. Usually this happens because they miss easy chances early on and then give up silly goals down the stretch. Well, this version of La Celeste seems to be the complete opposite of that. They were thoroughly outplayed in the first half of last month’s Venezuela game, and yet went to the locker room up 1-0. Last night, other than a 20-minute stretch in the first half, Ecuador bullied Uruguay around the pitch, using their speed on the wings to create deep runs and scoring chances.

However, Fernando Muslera had a fairly quiet night, because the finishing just wasn’t there. The best scoring chances were on the other side, where THE BEST GOD DAMN PLAYER IN THE WHOLE WORLD Luis Suárez kept feeding Cristhian Stuani crossing shots from the right side. The first one barely missed the far post ten minutes in. The second was pushed out by the Ecuadorian keeper for a corner kick two minutes later. Carlos “The Duck” Sánchez took it and sent the ball into the heart of the penalty box. Celeste captain and THE BEST GOD DAMN DEFENDER IN THE WHOLE WORLD Diego “The Pharaoh” Godín made a run to the front of the box and was pretty much mauled by 3 defenders, but this allowed Uruguay’s other center back Sebastián Coates to sneak in behind him and push the ball into the net for his first goal with the national team. Coates was easily the best Celeste player last night, putting out fires all over the defensive front and adding this goal 13 minutes into the game. He started because José María Giménez wasn’t available and showed off Uruguay’s back line depth.

The rest of the first half was fairly even with both teams pushing forward, but just when it looked like Uruguay would take the advantage into the locker room, Ecuador struck: a quick counterattack off a recovered ball deep in their own territory resulted in a chance for Felipe Caicedo, who pushed the ball past Muslera. It was a real momentum changer and a big blow to the Uruguayan psyche, or at least it could have been. On the restart, a long shot from Gastón Silva was pushed aside by the keeper and fell right to Sánchez. El Pato drove in from the right side and sent a low cross into the crowd, and Diego Rolán (starting because Edinson Cavani was suspended) stuck his backheel out and let the ball bounce into the net. If the Ecuadorian goal was a big deal, this one was yooge. Tremendous. The best goal. Instead of going into the halftime break having just lost the lead, the Celestes went to the locker room having just regained it.

The second half was all Ecuador, but again, the finishing wasn’t there and when it was Muslera had it covered. The 2-1 final score gave Uruguay yet another home win, their 6th in 6 games, even though they finally gave up a home goal. It was a pretty poor performance by Uruguay, as the team really missed Cavani up front and was outplayed by Ecuador, and yet the final result was the same. Some fans will complain about the level of play, but I’ve been waiting for a long time for a Celeste team that can get the 3 points even when it’s not playing its best soccer, so I’ll take this Anything to make this week less awful.

Is This Really Going to Happen?

Throughout this tournament I have been telling myself not to get my hopes up, but with every round it gets harder and harder to temper expectations. With just 7 games left, Uruguay is still sitting in 2nd place in the group, 1 point behind Brazil. It has a 5-point lead on third place Colombia, 6 points on Ecuador (4th) and Chile (5th), and a whopping 7 points on 6th place Argentina, which looked god awful in its 3-0 road loss against the group leaders. That’s a lot for all those other teams to make up, so if they can steal a point in Chile next week it may just be time to start checking airline schedules. I’ll be here next week to recap the second half of this double round. See you then!