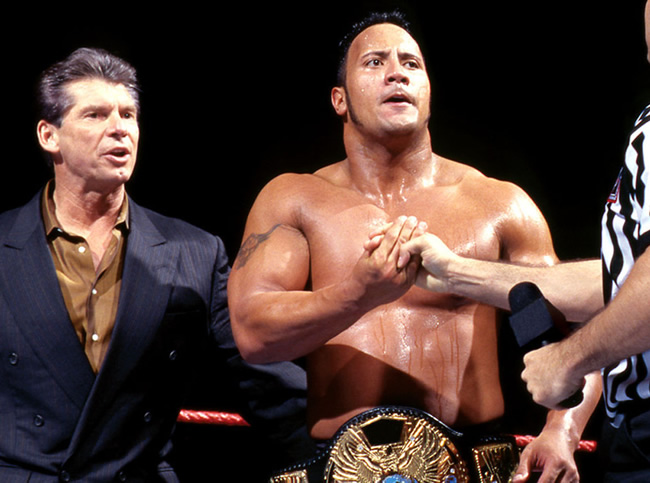 The WWE World Heavyweight Championship tournament, which will culminate at Survivor Series from Atlanta, Georgia on Sunday, November 22nd, started last week on Monday Night Raw! As we wait to see how it unfolds, let’s continue our coverage of the history of WWE/WWF championship tournaments! Today, we’ll tackle “Deadly Games,” tournament that went down 17 years ago this month, at Survivor Series 1998. The Evil Mr. McMahon was just rounding out his first year of existence, so you know it’s going to be good!

The background to this tournament is a bit of a whirlwind, so bear with me for a second (or about 1,000 words). It all surrounds the story that the evil Mr. McMahon, and his corporation, were desperate to keep “Stone Cold” Steve Austin away from the company’s top prize. Vinny Mac literally went insane trying to do this, and he reached damn near Super Saiyan levels of schemery and nogoodnickitude in the process. As I’m sure you all recall, Austin won the belt for the first time at Wrestlemania XIV, using a Mike Tyson face turn to help get the 1, 2, 3 on Shawn Michaels. Talk about peeing in a guy’s oatmeal. Nobody was more upset about this than Vince. He called it a public relations nightmare, and the CEO soon made it his number one priority to right that wrong.

After tireless attemps to force Austin to fall in line and be that corporate champion, Vince brought back Dude Love, the third alter ego of the deranged Mick Foley (after Cactus Jack and Mankind, of course) to do his dirty work for him. The Dudester, a fun-loving hippie, soon became Vince’s main lackey, even shedding his beloved tie-dye tights and donning a corporate suit in the process. He wore a tie and put his hair in a pony tail, for god’s sake!

The first Pay Per View after ‘Mania was Unforgiven: In Your House. Dude Love took on Austin in the main event, with McMahon at ringside having promised that a catastrophic event would take place. During the match, McMahon waited patiently for an opportunity to screw Austin, and the opportunity arose when the Dudester put Stone Cold in an abdominal stretch. Vince immediately jumped up and ordered the time keeper to ring the bell, conjuring up bitter memories of the Montreal Screwjob. Unfortunately for Vince, the time keeper refused, and the match continued. After several more minutes of fighting all over the ringside area, Dude Love ended up on the ground, with Vince making several attempts to revive his lackey. Austin swung a chair in an attempt to hit the Dudester, but cracked McMahon instead, who fell unconscious in a heap. Austin then rolled Love into the ring, hit a stunner and counted his own 1, 2, 3. It ended up being a disqualification for Austin, but he retained his precious belt.

The next month, at Over the Edge: In Your House, McMahon really pulled out all the stops. Dude Love would face Austin again, but the odds were stacked against the “Texas Rattlesnake” like never before. McMahon announced that his stooges, Gerald Brisco and Pat Patterson, would act as special guest time keeper and ring announcer, respectively, while Vince himself would be the special guest referee. Wowsers. It truly seemed like there would be no way for Austin to successfully retain the belt. Once the match got underway, things got even more ridiculous for Stone Cold. During the match, when McMahon saw fit to give Dude Love another advantage, the match became a No Disqualifications rules. Soon after that, it became a Falls Count Anywhere Match. At some point, McMahon took another chair to the head and was knocked unconcsious, and the Undertaker, who was also ringside for some reason, choke slammed Brisco and Patterson through the announce tables. Austin hit a stunner on Love and counted his own 1, 2, 3 again, but this time using Vince’s lifeless hands to count the pinfall. Austin had retained again.

WWF Over the Edge 1998 WWF Title: Stone Cold vs… by Geylow

After this, McMahon formed a bit of an unholy alliance with Paul Bearer, enlisting the services of the evil Kane to try and rid himself of Austin once and for all. The two ended up squaring off in a first blood match at King of the Ring in June. You knew the deck was stacked against Austin again, because Kane wore a mask and a full body suit as part of his wrestling gimmick. It’s tough to bleed at all with that type of getup on, but how would anyone be able to tell if Kane even did bleed? Damn that dastardly McMahon! Anyway, thanks to some interference by the Undertaker, who hit accidentally hit Austin with a chair (he was trying to hit Mankind, who had come down to help Kane), Kane accomplished Mr. McMahon’s goal, taking the title from the Rattler.

Unfortunately, during the pomp and circumstance of the next day’s crowning ceremony, Austin managed to goad Kane into a rematch that night. To Mr. McMahon’s chagrin, Austin won the belt back. To this day, this is the only time that Kane ever held the WWE Championship. I don’t think he even made it to 24 hours as champ. These events sparked a major three-way feud between the Undertaker, Kane and Austin, with McMahon pulling the strings behind it all, always with the goal of taking the belt from Austin.

Over the next few months, things got crazy. Austin, while still WWE Champion, ended up winning the tag team titles with the Undertaker at Fully Loaded: In Your House in July. At SummerSlam in August, Austin beat the Undertaker, whom it had recently been revealed had been in cahoots with Kane to take down Austin. At Breakdown: In Your House in September, McMahon booked a triple threat match between Austin, Kane and the Undertaker for the title. Clearly, the odds were stacked against Austin here, because he was facing the two cahooting brothers. Did I mention that McMahon also included a stipulation that said that the brothers couldn’t pin each other? Yikes! Unpredictably, the match ended with ‘Taker and Kane double choke slamming Austin and both pinning him at the same time.

The next night on Raw, McMahon scheduled a ceremony during which he would name a new champion. Was it Undertaker or was it Kane? Well, it turned out to be no one, as Austin drove a zamboni to the ring and attacked everyone. McMahon, miffed that the Brothers of Destruction didn’t defend him from Austin, instead made a match for Judgement Day: In Your House the next month, in which Kane would face the Undertaker in a match for the title with Austin as the guest ref. Somehow, this didn’t work out for Vince, as Austin refused to count any pinfalls for either brother and eventually knocked them both out and pinned them both, counting his own 123 and declaring himself the champ. That’s not really how reffereeing works, and Austin was fired by an irate Mr. McMahon. Vince would soon announce that a tournament would be held to crown a new champion at Survivor Series.

Austin showed up at Raw the next night and held Vince hostage at gunpoint. The big payoff was when he took Vince to the ring and pulled the trigger on the gun, revealing the infamous “Bang 3:16” sign from the barrell. Vince peed himself. Oh, and by the way, Vince’s son Shane had secretly hired Austin back and signed him to a five-year deal. Vince soon turned his attention to The Rock for no reason other than that Rock was “The People’s Champ,” and McMahon hated the people. All of this, and the fact that Mankind soon became Vince’s favored son on his quest to crown a new “corporate” champion, were the main stories headed into the tournament.

From the beginning of the tournament, it was clear that McMahon had stacked the deck against The Rock and Austin, and in favor of Mankind. Mankind’s first round opponent was billed as a mystery, and it ended up being Duane Gill, the lifelong jobber who eventually got famous for being Gillberg. Mankind beat him in a minute. Austin, meanwhile, took on the Big Bossman, who was clearly there to get himself disqualified, as he attacked Austin with a nightstick shortly after the match began. Bossman was brought back to take on The Rock when HHH couldn’t make his first round match due to an injury. The Bossman was, not suspiciously at all, rolled up for the pin after four seconds.

In the second round, Mankind beat Al Snow, while The Rock was involved in a shenanigans match against Ken Shamrock. During this match, the Big Bossman came down to try help Shamrock win the match. Naturally, and still not at all suspiciously, The Bossman’s plans backfired and he ended up accidentally helping The Rock win. No one was suspicious. Austin ended up with a bye in this round, because X-Pac and William Regal had a double count out in the first round.

The semifinals matchup between Austin and Mankind might have been the peak of Mr. McMahon’s evilness during this era. A wheelchair-bound McMahon (along with all his chronies) accompanied Mankind to the ring for the matchup. By the end, everyone had their shots in on Austin, including Vince, who at one point jumped out of his chair to stop the ref from counting a pinfall for Austin. The ref was knocked out, and Austin ended up pinning Mankind with no one there to make the count. Shane McMahon, who had still been feuding with his dad, ran down to the ring to count, but stopped at two and instead gave Austin the middle finger. Austin got hit with a chair by Slaughter and Briscoe, and Mankind got the 123. Austin chased the entire entourage out of the building, but he was eliminated. The Rock, meanwhile, beat the Undertaker by disqualification, when Kane ran down and choke slammed him. Not one person in the building was suspicious.

The entire tournament seemed to be designed for The Rock to lose to Mankind in the finals. The two had a back-and-forth battle, with Mankind pulling out some cheap tricks to get the advantage, and The Rock fighting back with tricks of his own. At one point, The Rock put Mankind in the figure four leg lock. To the shock of everyone who wasn’t paying close attention, Mr. McMahon immediately called for the ref to ring the bell, reenacting the Montreal Screwjob from the year before, and crowning The Rock his new corporate champion. Wowsers. With Vince gloating, Mankind demanded an explanation. Instead, he got himself a Rockbottom for his troubles. Just like that, Vince had pulled off the ultimate swerve on Austin, the fans and even on his own lackey, Mankind. Austin was finally vanquished, and McMahon had his corporate champion. His shining beacon… The Rock.

The aftermath of this tournament, and the chicanery that took place surrounding it, led to the creation of Vince’s “The Corporation” stable. Eventually, Mick Foley became the main baby face in trying to take The Rock down, eventually winning the title in one of the most emotional Monday Night Raw’s ever a couple of months later. Austin would eventually enter an epic feud with The Rock, winning the title from “The Great One” at Wrestlemania 17. All of that got jumpstarted by this WWE Championship tournament, and for that we remember it fondly.