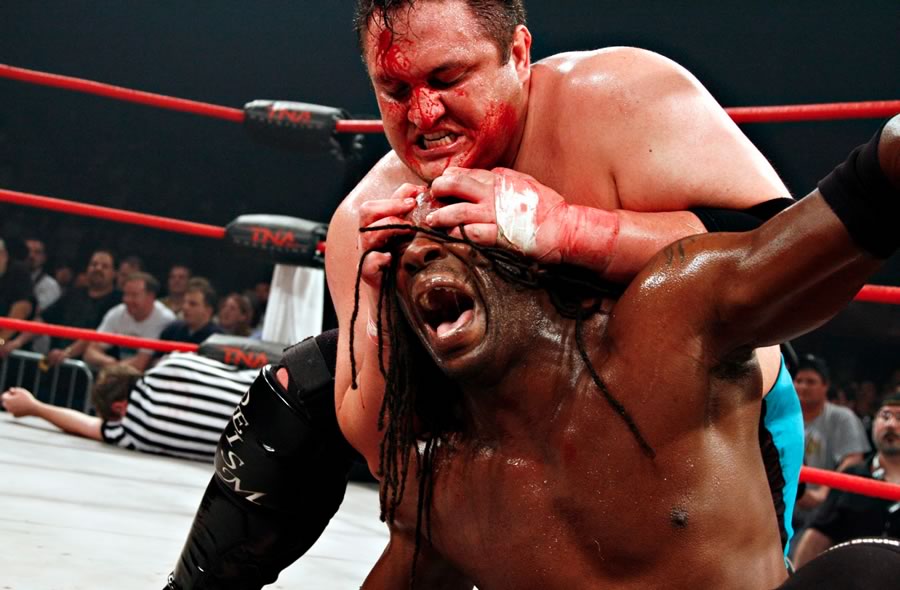 For those of you who haven’t heard the news, TNA was unable to reach a new agreement with Samoa Joe, one of their more popular stars of the better part of the last ten years or so. Now that Joe, whose real name is Nuufolau Joel Seanoa, is a free agent, should Vince McMahon open up his pocket book and bring him in for a run?

If you’re a big wrestling fan like me, you probably know who Samoa Joe is but, if you’re just a casual fan, or only follow WWE, then let me tell you a little something about him. After being trained by Cincinnati Red in California (go figure), Joe actually got his first taste of real professional wrestling as a jobber in the then WWF in the late 1990s. He would come in from time to time to put over other wrestlers on the WWF’s secondary shows, like Jakked or Metal. I’m sure at the time, it was great experience, but he never got signed to a full time deal by the Federation.

His first real splash as a pro wrestler came in 2001, when he began wrestling in Ring of Honor. While in ROH, he became the longest reigning champion in the promotion’s history, holding the belt for 21 months from March of 2003 until December of 2004. Not too much longer after that, Joe signed with TNA. There, he went on to hold every major title over his career. He was the TNA World Heavyweight Champion once, the TNA Television Champion once, the TNA X Division Champion five times and the TNA Tag Team Champion two times. He won several other accolades with the company, and is regarded as one of their most successful wrestlers.

Does all of this success in other promotions mean that the WWE should take a look at the 35-year old grappler? Not necessarily, but Joe shouldn’t exactly be begging WWE for work either. He’s a guy that can probably make some pretty good money just touring the independents, like A.J. Styles did after he couldn’t come to terms with TNA a couple of years ago. Also like Styles, Joe could probably make good money, and receive a good push, in Japan. Styles has been working mostly in New Japan Pro Wrestling (and ROH) of late, and has twice won the IWGP World Heavyweight Championship. He’s also involved with the Bullet Club, NJPW’s most popular faction of the day (current NXT wunderkind Finn Bálor is a former member). What I’m saying is, Joe has options.

I think the WWE should definitely throw their names in the ring and present themselves as another legitimate option for Joe. He’s a good worker, whom Stone Cold Steve Austin has already endorsed as a “helluva hand,” so I think, at the very least, they should be bringing him to the performance center for a tryout run. Rumor has it that HHH is in favor of bringing Joe in, but is meeting some resistance from Vince (because of course), so we’ll have to wait and see. If the E is only offering him a tryout run with their developmental, however, it might not be what Joe wants to do. I guess we’ll have to wait and see.