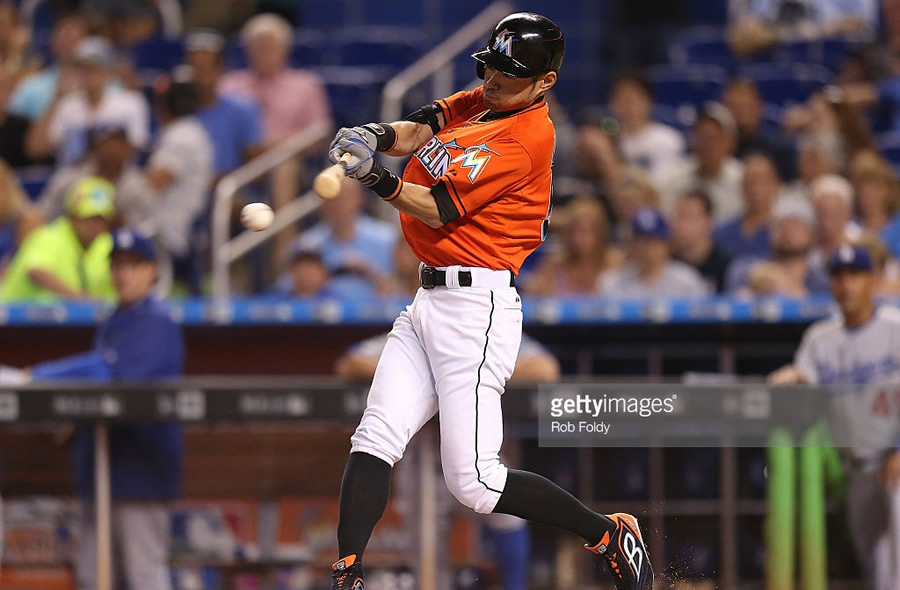 On Thursday, our very own Jason Cohen posted about a statement Ichiro made regarding how he was courted by the Marlins. Just to review, here’s the tweet:

If Ichiro is saying what it seems like he is saying, which is that he felt unappreciated over his last two seasons with the Yankees, then he’s either crazy, or he had a little too much bubbly at the celebration of his Marlins contract. Jason summed this situation up pretty well when he said “$13 million is a lot of money to feel you’re unappreciated,” but I wanted to really dig into this, to see if there’s any real reason why Ichiro should feel slighted by his time on the Yankees. Spoiler alert: there isn’t.

Ichiro first came to the Yankees in a bit of a shocking trade in 2012. After a well documented Hall of Fame career in Seattle, Ichiro asked to be dealt to a contender. The Yankees happened to be in town, so before the first game of a three-game series, Ichiro packed his bags and moved from the home clubhouse to the visitor’s clubhouse in exchange for Danny Farquhar and D.J. Mitchell. It was pretty bizarre to see Ichiro play his first ever MLB game not in a Mariners uniform against the Mariners, but it was great that the Seattle fans got a chance to immediately thank him for all the great seasons he had for the M’s.

Ichiro must have been invigorated by the pennant race, because he was excellent for the Yankees. He put up slash lines of .322/.340/.454, an OPS + of 113, hit 5 homers, drove in 27 runs and stole 14 bases in just 67 games with the Bombers. He helped the team make it to the ALCS, and the Yankees were impressed enough that they signed him to a two year, $13 million contract during the offseason. That number seemed a bit high to most people at the time, but the guy had just had a blistering second half, so we all kind of accepted it and welcomed him back into the fold. Who doesn’t love Ichiro? The guy is a legend, right?

Words can’t really express how terrible Ichiro played for the Yankees over the next two years. He didn’t hit .220 or anything, but I just never got the feeling that I was ever watching the real Ichiro out there, or even the Ichiro we saw in the second half of 2012. In 2013, as the league’s 39th highest paid outfielder (according to Sportrac) Ichiro’s slash lines were .262/.297/.342, and he only managed a 77 OPS+. He somehow managed to hit 7 balls over the fence and stole 20 bases, but it was painful to have him in the lineup almost every day.

When the Yankees retooled their entire outfield for 2014, Ichiro was expected to be the fourth outfielder. I was OK with it, because a terrible fourth outfielder won’t ruin a team. In fact, Ichiro hit very well early on in his part time role. Unfortunately, an injury to Carlos Beltran made the Yankees have to play Ichiro just about every day, and he was exposed to be the washed up old guy he really was. Again, as the 39th highest paid outfielder in the league, he slashed .284/.324/.340 with an OPS+ of just 89. He only managed 1 homer and 22 RBI in 143 games. The real crime there is that he played 143 games, but the Yankees didn’t have much of a choice.

That brings us to Ichiro’s new contract with the Marlins. He will serve as the fourth outfielder behind Christian Yelich, Marcell Ozuna, and Giancarlo Stanton, and will earn $2 million. This is exactly the kind of contract I wish Ichiro had been under during his tenure with the Yankees. The fact that the Yanks let him play in almost 300 games, and paid him $13 million to do it, should be appreciation enough, no? I mean what did he want them to do? Carry him out to right field on a day bed and fan him with ostrich feathers? He was terrible, and they didn’t replace him until they got Chris Young in late August. He should be thanking them for all the money and playing time he received.

As angry as that statement made me, I’m actually a little sad about it. I’ve been hoping Ichiro sticks around somewhere for a couple of years so that he can get to 3,000 MLB hits (he’s currently sitting at 2,844), but now that he’s bitten the hand that overfed him for the last two years, I’m not so sure about that. The bridge is burned, Ichiro. Enjoy Miami.