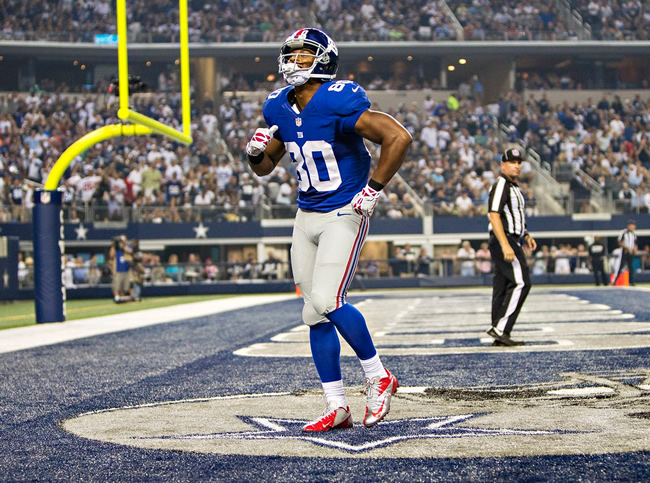 As great as it was to see the Giants beat the Dallas Cowboys in Dallas on opening day, and as thrilling as the win itself was, the best part for me was seeing Victor Cruz dance his way through celebrating his first TD in two years. Welcome back, Victor Cruz!

The play itself was a simple one. After the Giants ran down the field and all the way up to a goal line situation, they started passing the ball for some reason. The first two passes went incomplete to Odell Beckham–the second of which would have been an easy score if not for a bad throw by Eli Manning–which brought up third and goal on the 3. Eli snapped the ball and Cruz broke free from the linebacker, cut across the middle of the end zone and found himself wide open. Manning fired the ball to him for the eventual game-winning score, putting the Giants up 20-19 and ending a 721-day scoring drought for Cruz.

As if he’d never even gotten hurt, or missed almost two years of action, Cruz immediately broke into that oh so memorable salsa routine. The last time we’d seen it was On September 21, 2014, after the Paterson, New Jersey native had caught a 26-yarder from Manning to give the Giants a 7-0 lead against the Texans. If I had known we wouldn’t see another salsa for two years, I would have taken more notice of it.

You see, there was a time, when Cruz’s salsa had become old hat. The now 29-year-old was signed by the Giants as an undrafted free agent out of UMass prior to the 2010 season. Although he could have been an afterthought in the Giants’ plans, he took the opportunity to make a name for himself that summer. He ended up leading the NFL in preseason receiving yards (297) and tied for the touchdown lead to boot (4). It was against the Jets in the third preseason game that Cruz turned the most heads. Wearing number 3, Cruz caught 6 passes for 145 yards and 3 scores. It was enough to earn him a spot on the team.

In 2011, Cruz set about becoming Eli’s number one target. He ended up with 82 catches, and a franchise record 1,536 receiving yards. He also had a 99-yard TD reception that season–also against the Jets–which is the longest play from scrimmage in franchise history. Cruz also added 9 salsa lessons that season. The next year, Cruz was at it again, catching 86 balls for 1,092 yards and 10 more salsa lessons. He was on his way to yet another monster season in 2013, but a bruised heel held him to only 12 starts. Despite that, he still racked up 73 catches for 998 yards and 4 more salsas. Just six games into the 2014 season, Cruz tore his patella tendon, and he’s been gone ever since.

Truth be told, Cruz has always been a bit injury prone. In 2010, after he made that big impression during the preseason, he only lasted three games before a hamstring injury put him on IR for the rest of the season. After that there was the heel, and then the knee. But boy, that knee injury was tough. He wasn’t ready for opening day in 2015, and then revealed that he’d also injured his calf while rehabbing the knee. The calf ended up needing surgery too, and he was done for that year as well. Even this summer, Cruz had some trouble getting on the field during the preseason, which led to speculation he might not even make the Giants Week 1 roster.

Thankfully, Cruz was able to finally get healthy, and we got to see him put on the Giants uniform in a meaningful football game for the first time in 700 days. It’s been a long journey, but we’re glad to have him back. His presence on this offense, along with Beckham, Sterling Shepard (of the ad agency Sterling Shepard Cooper Price) and even Larry Donnell at tight end or Shane Vereen out of the backfield, gives Eli and the Giants one of the more formidable receiving corps in the league.

I hope they all catch a bunch of touchdowns, but the ones that end in salsa will still probably be my favorites.