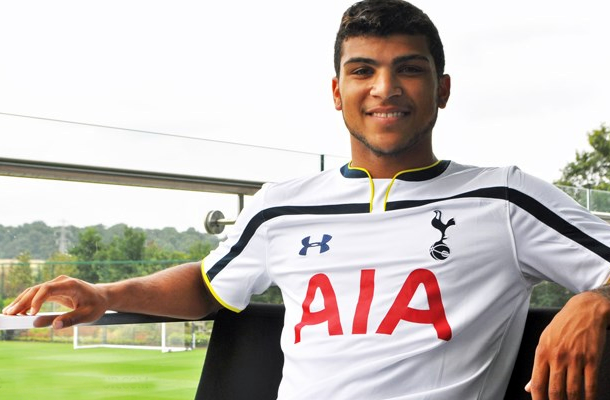 I know I’m a few days late on this, but I decided I had something to say about it, and I run this blog, and I am above the law! Ahem… Anyway, in case you guys haven’t heard, DeAndre Yedlin will soon leave the dreary, rainy Seattle weather behind. Instead, he’ll be heading to Tottenham, London, where the weather is… actually, it’s even more dreary and rainy, isn’t it? Anyway, the point is, the star defender for Seattle Sounders FC, and one of the breakout stars at World Cup 2014 for USMNT, is heading to the Barclay’s Premiere League to play for Tottenham Hotspur FC. It’s a huge move for not only DeAndre, but for the United States as well, so let’s break down the particulars.

First of all, money talks; so let’s talk money. Seattle will receive $4 MM from Tottenham for the services of their first ever homegrown player, and it appears that the 20-year old Yedlin will sign a four-year deal with the Spurs. However, don’t think we have to say goodbye to DeAndre just yet. He actually won’t be joining Tottenham until next season. Yedlin will stay in Seattle through this current MLS season, at which point the Spurs will assess him and their own needs this winter, and decide if they’ll take him then or next summer.a

This is really the best case scenario for Seattle. Yedlin’s star has been clearly on the rise ever since Jurgen Klinsmann made him a surprise addition to the USMNT World Cup Brazil roster. Yedlin displayed his blazing speed during the World Cup, and opened up a whole lot of eyes around the world. During the European transfer window, rumors of about where he would land flew rampantly. It was England, Italy and then England again. It was really only a matter of time before someone snatched Yedlin away. With this deal, Seattle gets to keep their young star for at least the next few months, and perhaps until next year too. They also still get a very good amount of money (by MLS transfer standards at least), which they can use towards finding a replacement.

This deal is also clearly good for DeAndre, as he gets to go try to make a name of himself in one of the best leagues in the world. He will get to face competition that is well beyond what he would see in MLS (although MLS is already leaps and bounds ahead of where it once was), which will help him elevate his game just in time for Russia in 2018. He also gets to do all of this while making that nice Premiere League money. One thing to worry about for Yedlin, however, is playing time. Will he get into meaningful games in Tottenham? Former Spurs goalie Kasey Keller openly warned that if Yedlin didn’t earn a starting job for the team, he would struggle mightily to even get on the pitch.b If this is the case for Yedlin, then the move might not be ideal. He has the talent. Let’s just hope he gets a real chance to show it.

I, for one, am looking forward to watching Yedlin play out the rest of his time in Seattle. It should be a nice farewell tour for him, as their fans are among the most passionate in the league. When he does finally make the move, I can’t wait to watch him play across the pond. Congratulations, DeAndre!