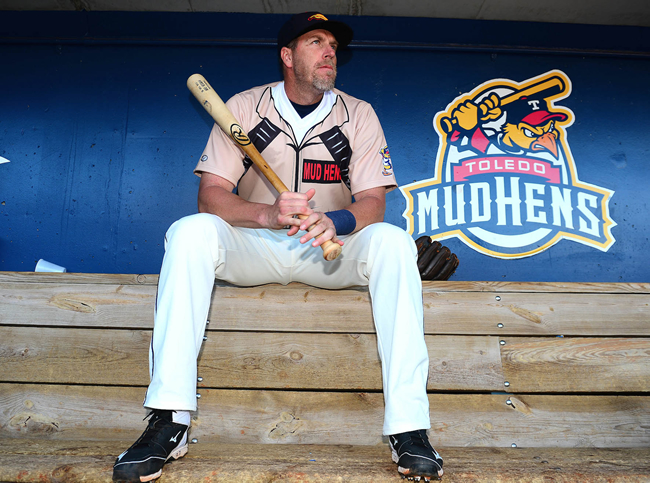 Being number one is an honor that not too many people can claim. For every statistical category, only one person can claim to be number one. Is that always a great thing though?When 37-year old career minor leaguer Mike Hessman hit his 433rd career minor league home run on Monday night (a grand slam against Lehigh Valley), he became the number one home run hitter in minor league history. No one else can make that claim, but being the minor league king is not exactly what every kid dreams of becoming when they’re playing with their dads in the back yard. However, just because Hessman has never been able to establish himself as a legitimate major leaguer, that shouldn’t take away from all he has accomplished. Let’s take a brief look back at the bus-riding journeyman’s epic minor league career, and get to know him a little bit better.

One thing everyone will say, and has said since Hessman’s record-breaking home run, is that he’s the new Crash Davis. For those of you unfamiliar with the 1988 film Bull Durham, Davis is the life-long minor league catcher portrayed by Kevin Costner. In the movie, Crash never gets his shot at the bigs, and retires after setting the all-time minor league home run record… like immediately. Furhtermore, in the movie, Davis only ends up with 246 homers. I’m curious as to whether the producers looked up an incorrect statistic (most homers in AAA or AA, as opposed to all minors), or if they just felt like… no one’s gonna play in the minors long enough to reach 250 homers, so 246 sounds like a lot. The fact that Hessman might end up with more than two hundred more dingers than Crash Davis is a testament to his durability, and his love of the game.

Also, as Rodger Sherman pointed out in his article for SB Nation the other day, its pretty amazing how rare Hessman’s feet is. Buzz Arlett, the guy who previously held the record, retired in 1937, which means this record has stood for nearly 80 years. This is because people don’t stick around the minors long enough to do what Hessman and Arlett did. They either end up in the big leagues, overseas or quitting early. No one wants to ride uncomfortable buses making a couple grand a month for 20 years, do they? No! As an aside, Arlett got one season in the bigs, 1931 with the Phillies. He hit .313/.387/.538 with 18 homers and 72 RBI in 121 games. The next year, he was right back in AA and, despite hitting well over .300 for the next six years, never sniffed the big leagues again. I checked into it, and there were no injuries. He just never got called up again. What’d he do, sleep with the manager’s daughter? Jesus!

Hessman’s big league life, however, has been less to write home about. He was drafted by the Braves out of Mater Dei High School in Anaheim, CA in the 15th round of the 1996 draft. At 6’5 and over 200 lbs, scouts saw in Hessman a guy who, if he could fill in and develop, could hit ton of homers. He climbed slowly up the ranks for the Braves, reaching AAA Richmond as a 24-year old in 2002. He had the ability to sock dingers just fine, but his other tools were slow to develop, or didn’t develop at all. Despite being one-dimensional, Hessman earned a call up in August of the 2003 season. He hit his first big league home run off of Mike Stanton on August 26, and hit one more before season’s end. He was called up again in 2004, but hit just .130/.155/.261 in 29 games. At season’s end, he was granted free agency. He wouldn’t reach the bigs again until 2007, hitting 4 homers in 17 games with the Tigers. The next year, he played 12 games for Detroit, hitting .296/387/.889 with 5 homers. After the season, he was again granted free agency, and picked up by the Mets. The Mets called hessman up for his last cup of coffee in the big leagues during the 2010 season. In 32 games for the Amazins, Hessman hit just .127/262/.255 with 1 homer. Overall, in 109 big league games and only 250 plate appearances, Hessman has hit .188/.272/.422 with 14 homers and 33 RBI. The power numbers are there, but nothing else. Odds are, unless the Tigers decide to be nice in September, that those will be his final big league numbers. Not good.

Over the rest of his professional career, one that has spanned 2,073 minor league games and 8.473 plate appearances with the Braves, Tigers, Mets, Astros, Reds and now the Tigers again, Hessman has hit .232/.315/.466 with 433 home runs and 1,198 RBI. Other than the batting average, those are fairly impressive numbers. His best season, in my opinion, was 2007, when he hit .254/.356/.540 with 31 homers and 101 RBI for the Tigers’ AAA Toledo franchise. His career high in home runs came a year later, when he hit 34 jacks for Toledo. However, you know that when he tells his grandkids about his baseball career, he’ll probably talk more about the 14 jacks he hit in the show, than however many he ends up with in the minors, which is why, again, his record is a bit bittersweet.

Anyway, at 37 years old, more than 10 years older on average than his teammates, Hessman is the home run king – the real life Crash Davis. Unlike the ficticious Davis, Hessman can claim that he made it to the big leagues, and several times to boot. That’s more than thousands upon thousands of players can claim, and it entitles him to benefits for life from the players’ union. Also unlike Davis, and to his credit, Hessman has no plans to walk off into the sunset now that he wears the crown. He told MiLB.com:

“If it was later in the year, maybe. But no, I’ve never thought about [retiring]. Now I can go out there and hopefully finish the season strong.”

Hessman says that, when he does finally decide to hang ’em up, he wants to go into coaching. Some might say that he could be coaching at the big league level now if he had retired after his last big league taste with the Mets, or even a couple of years after that, but I say, as long as he’s content playing, we should let him play. Hell, maybe he’ll be the only minor leaguer to ever reach 500 home runs. Wouldn’t that be something?

Good luck to you, Mr. Hessman. Jobu’s Rum will be watching!