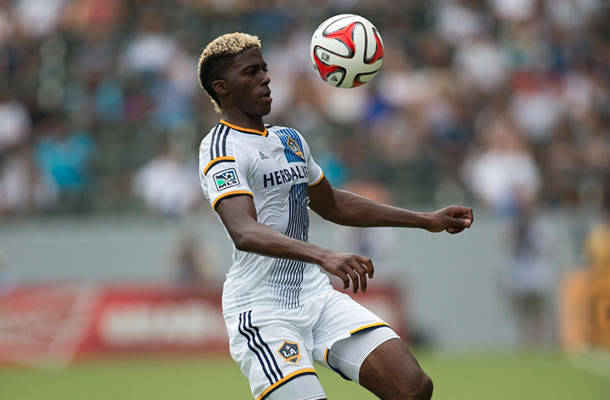 As many of you know, I have recently gotten into Major League Soccer. While I haven’t quite picked a team to root for exclusively yet, I find myself watching a lot of LA Galaxy games lately (thanks MLS Direct Kick!). The Galaxy are a great team to watch to begin with, but when you throw in the fact that this is Landon Donovan‘s final season, it gives each game a bit of a special feeling. Interestingly enough, lately I’ve been tuning in to Galaxy matches not to watch Donovan’s farewell tour, but to check out one of L.A.’s young stars, and one of the best young players in all of MLS– forward Gyasi Zardes. Let’s get to know him a little bit better.

The 23-year old Hawthorne, California native is a homegrown signee of the Galaxy, having played in their academy system at the U-18 and U-20 level–a team he led to a national championship in 2010. Zardes also played college soccer at CSU Bakersfield, where he quickly became one of the best players in college during his sophomore season. That year, he finished fourth in Division I in goals with 18, was named the Mountain Pacific Sports Federation Player of the Year and finished as a semifinalist for the MAC Hermann Trophy–an award handed out yearly to the top college soccer player in the country.

After another solid season his junior year, Zardes signed a professional contract with the Galaxy under the Homegrown Player Rule (a rule established in 2008 that protected players rising through one team’s academy system from allocation procedures, like the MLS Super Draft). Gyasi made his league debut for the Galaxy in April of 2013 in a 2-0 win against Real Salt Lake and scored his first MLS league goal against Vancouver on May 11 of that year. Once Zardes got in the lineup, he stayed there, starting 23 of the 27 games he played his rookie season. He struggled a bit though, partially due to the fact that coach Bruce Arena was playing him out of position (on the left wing to try to take advantage of his speed), and partially because of normal rookie struggles. At the end of the year, Zardes had tallied only 4 goals and 4 assists.

Gyasi only started three of the team’s first eleven matches this season–his second in MLS–and scored only one goal during that time. After that, however, he was given a starting role, and placed in his proper position, and boy has he responded. He has started the Galaxy’s last 15 games, and the stabilized role and playing time have sent him on quite the run. In those 15 starts, Zardes has scored 13 times for the Galaxy, registering braces (two goals) in three games, including his last two. With his second goal in Friday night’s match against the Colorado Rapids–his 14th of the season–Zardes actually broke New England’s Diego Fagundez‘s MLS record for most goals by a homegrown player. As much as I don’t like him taking records away from my fellow Uruguayans, I must admit I was very impressed to hear that stat.

The future certainly looks bright for Zardes as he continues his development in MLS. In fact, many people are already calling for him to be included in Jurgen Klinsmann’s USMNT roster for the next round of friendlies taking place this month around the United States. The Brazil World Cup showed us that, while the Americans played well overall, they were a bit lacking on the offensive side of the ball–especially once Jozy Altidore got hurt. A guy that can score like Zardes could really help out as the USMNT begins the 2018 World Cup cycle. Plus, he looks kind of like Simon Phoenix (Wesley Snipes) from Demolition Man, who was a total badass. Gotta have that on the USMNT, no?

Either way, I’m excited to see what the future holds for young Zardes, aren’t you?