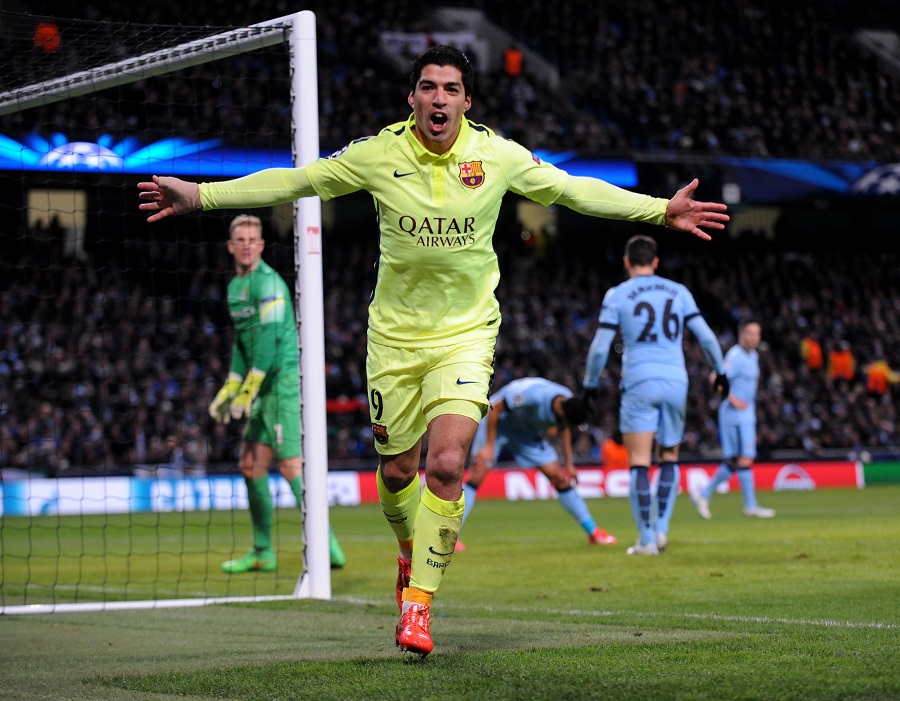 Hello fans! I know it’s not time for the Charrúa Report quite yet, but I just needed to comment on what just happened in Manchester, where it seems that the English have still not learned that it’s best to let sleeping dogs lie.

The Champions League Round of 16 continued this week, and one of the biggest matchups was Barcelona’s visit to Al Ettihad Stadium to take on Manchester City. This was Luis Suárez‘s first time back since leaving Liverpool at the end of last season, but he seemed very comfortable in his old haunts. Luis always saves his best for the English (given his past treatment by the press there, I can’t say I blame him), and this game was no exception. Gone was the helpful player who has spent the last few months setting up his more acclaimed teammates for easy goals, to be replaced by the devastating, unstoppable finisher we know from Liverpool and the Uruguayan National Team. Suárez’s first half brace was all the scoring Barcelona needed to come away with a 2-1 road win that leaves them with one foot in the CL quarterfinals; they’d be in even better position if Lio Messi hadn’t missed a last minute penalty kick and the ensuing open goal chance.

Messi’s lack of intestinal fortitude notwithstanding, this was a huge win for Suárez and Barcelona, especially coming after a disappointing La Liga home loss that dropped them 4 points back of Real Madrid. We’ll see what happens in two weeks at the Camp Nou, but City have a tough hill to climb.

Before we move on, let’s take a moment to commiserate with poor Joe Hart. By now, the beleaguered City and English National Team keeper must be seeing Suárez in his nightmares. After the game, Hart seemed upbeat, stating that his defense “actually controlled [Suárez] well apart from the two goals.” Whatever you need to tell yourself to sleep at night, Joe. In all fairness, Hart’s comment is actually fairly on point, apart from the fact that his back line twice lost track of a guy dressed like a glow stick. It underscores just how dangerous Suárez can be: a game in which he “only” scores two goals can be seen as a win for the defense.

After the game it was back to the same tired old game plan for the English media, as the Daily Mail claimed that Suárez had bitten Martín Demichelis in added time. Well, they didn’t claim anything; they followed the coward’s playbook by posting a grainy video and asking an “innocent” question. It didn’t take long for others to step up with better views of the play in question (great job by you, Daily Mail research staff), showing that, in fact, no such thing happened.

You spent so many years claiming to be the best in the world yet coming up short again and again, at least on the rare occasions when you showed up at all. Then you tried to reinvent yourself as a lone beacon of soccer morality and fair play, even though you pioneered violence on and off the pitch. You even had to buy yourself a World Cup just so you’d have some sort of trophy to look at. You’ve been in exactly one World Cup final, and no UEFA Championship finals at all. It’s a very sad story, but it’s not Luis’s fault. Leave him alone. Look to your own glass house.

Here’s a look at all of Suárez’s touches in the game: