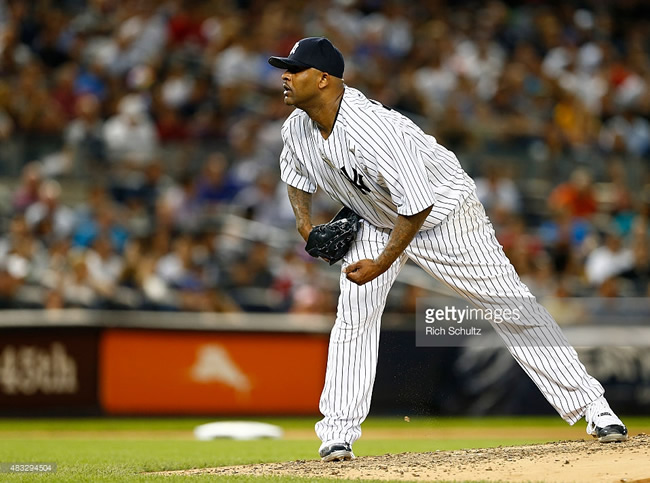 The inevitable “CC Sabathia rediscovers his old form” narrative is once again hitting the news this week, after the hefty lefty shut down the Red Sox on Thursday night in the Bronx. Now, I don’t want to be the wet blanket Debbie Downer fun police and pull the man down while he’s riding high, but should we really be that impressed? I’m not saying we can’t be happy that Sabathia, for at least one night, pitched the way we’ve been expecting him to pitch every five days for the last three years or so, but we need to temper our excitement and expectations moving forward.

I want to first say that, in no way, am I criticizing Wallace Matthews, ESPN, or any other journalist I might talk about in this post. I respect all of these writers’ abilities, and their rights to their opinions, I just happen to disagree with them. That being said… this headline is exactly what should be avoided.

On Thursday night, Sabathia was brilliant. He pitched six very strong innings, holding the Red Sox to just one run on three hits, while walking three and striking out eight on 99 pitches. Fans could not have asked for more from CC in this game. He pitched with velocity, skill and an emotional fire seldom seen as he has struggled over the past couple of seasons. It was terrific, and greatly needed by a team trying to hang onto first place in the division.

“They’re not likely to consider such a move if he can keep pitching like this.” – Anthony McCarron, New York Daily News

Unfortunately, last night’s outing was only Sabathia’s eighth quality start of the season. Of those eight, only two have involved throwing more than the minimum amount of innings required for a QS. Sabathia has thrown consecutive quality starts just once. Those two starts were May 11th against the Rays (7 innings, 6 hits, 4 runs, 3 earned, 2 walks, 9 strikeouts) and May 16th against the Royals (7 innings, 6 hits, 1 run, 0 walks, 5 strikeouts). The start after that, he gave up six runs in 2 1/3 innings, and he didn’t have another quality outing for three weeks.

Taking this further in outings following a quality start, just when the narrative that he might be turning around comes back into popularity, Sabathia is 1-3 with a 8.25 ERA (!). He has allowed 55 baserunners and a staggering 10 home runs in just 36 innings in those starts. And yes, I included the May 16th start against Kansas City in those numbers (hence, the win). While CC certainly isn’t as bad as the numbers he has put up in his post-quality start starts, we can’t fool ourselves into thinking that he’s as good as the guy who shut down the Red Sox last night either. After all, this is the last place Red Sox we’re talking about (that’s fun to say, right?).

Look. I want CC to pitch well. It’s what I’ve wanted for him, and the team, ever since he started pitching poorly a few years ago. I love when he pitches well, because it usually means the Yankees are going to win. I’m just trying to keep us all from getting our hopes dashed if CC goes out next week against the Indians and gets hammered for seven runs in three innings. I’m not going to be ready to say that he’s back, and should be in the rotation now, let alone in a potential post-season, until he can show me that the Yankees can depend on him to keep them in games on a consistent basis.

There’s no doubt in my mind that CC has the desire to win, and would literally do anything for his teammates and coaches. We’ve seen him be the first guy out of the dugout when Yankees’ hitters get thrown at. We’ve seen his emotions pour out when he gets big outs (like the shimmy he did after striking out David Oritz with the bases loaded on Thursday night). He wants to redeem himself. He wants to win. It’s just that it’s been a long time since we’ve been able to relax with him on the mound.