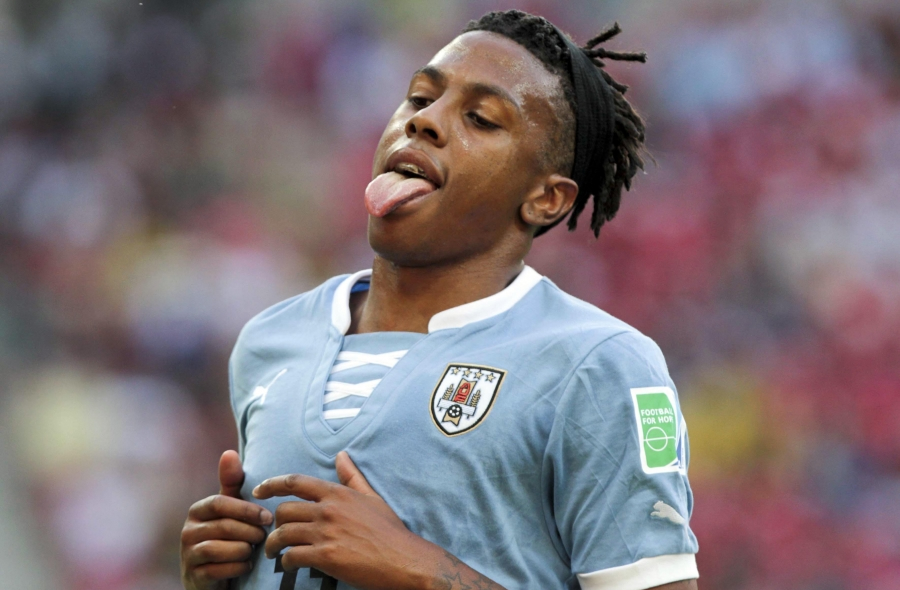 Through the first two games of the Copa América group stage, Uruguay has a 1-0 win against Jamaica and a 1-0 loss against Argentina. Simply stated, this is not going to be good enough for them to make a deep run in this tournament. With Edinson Cavani still apparently in Paris, and Diego Rolán not looking like he’s quite ready for prime time yet, Uruguay must turn somewhere else to get some offensive production. That somewhere else is Abél Hernández. I’ll tell you why.

First, let’s get a little more information about Hernández, since we’ve never profiled him on the site before. The 24-year old from Pando, Uruguay got his start playing for Uruguay’s Central Español from 2006 until 2008, before being signed by Uruguayan giants Peñarol. Six months later, he was sold to Palermo, of the Italian Serie A. From 2009 until 2014, he earned 111 caps for the Rosanero (Pink and Blacks), netting 31 goals and truly making a name for himself. Prior to the 2014-15 season, Hernández was purchased by Hull City of the Premier League for just under €11 million. The Tigers brought him in to basically lead their attack–along with Nikica Jelavic–and the moved looked like a good one when Hernández scored three times in his first five matches, but the wheels soon came off. Abél only scored once over his last 21 games. In the last match of the season, he threw a punch at Manchester United’s Phil Jones, which has earned him a suspension for the first three games of the season. If we are to believe the rumors, Hernández may soon be on his way out of Hull, and possibly even England all together.

As far as the national team is concerned, Hernández got his first call up from Óscar “El Maestro” Tabárez in July of 2010, in a friendly against Angola. He drew a penalty and later scored his own goal in that game, as La Celeste won 2-0. He was used sparingly as a sub during the 2011 Copa América, which Uruguay won, and featured on the 2012 Olympic team as well. He had his best senior level game against Tahiti during the 2013 Confederations Cup, when he netted four times in an 8-0 Uruguay win. He also subbed in in Uruguay’s two losses during the 2014 World Cup. Overall, he’s earned 18 caps and scored 9 times for the Charrúas.

So far during this Copa, Hernández has played all of 25-ish minutes. He didn’t play at all against Jamaica, and he subbed in in the 69th minute of the loss to Argentina. In the 90th minute of that loss, he put a ridiculous shot on goal that was barely parried away by Argentine goalkeeper Sergio Romero, which is basically better than anything we’ve seen Cavani or Rolán do all tournament. I know Rolán had a near goal on a nice header against Argentina, but he also missed a wide open net in that game, and did basically nothing against Jamaica. You’re certainly not going to take Cavani out of the lineup, and I’m not saying we should drop Rolán off the face of the earth just yet, but maybe it’s time to go with someone else for the big group stage finale against Paraguay. To me, it makes sense to go with Hernández to start that game, preferably with Carlos Sánchez back in the starting eleven as well.

Uruguay is going to need to score goals to get past Paraguay (although a 0-0 draw should probably leave them in OK shape too), and the current lineup just isn’t doing that. It’s time for El Maestro to change his lesson plan (I know you see what I did there!). Put in Abél, or we riot (not literally though, we’re not all Peñarol fans).