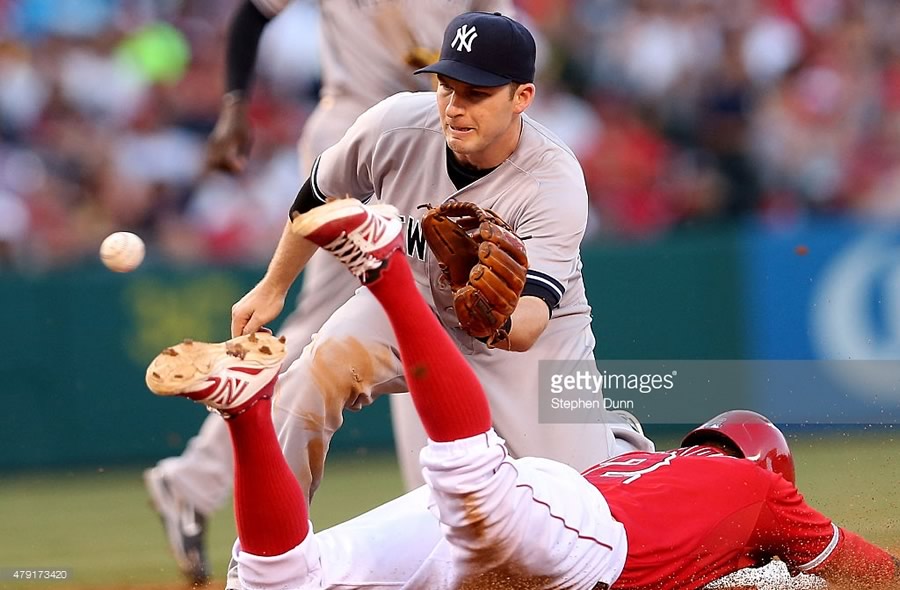 Excuse me if you’ve heard this before, but the Yankees need to start cleaning house, and they need to start now. The luster is gone from their hot start as the team has now lost eight out of nine and they are no longer in first place. When you throw in the injury to Jacoby Ellsbury, May’s nightmare might extend to June if they don’t do something about it soon. The best way to right the ship is to start putting trash bags on the curb, and we can start with Stephen Drew and David Carpenter.

When this Drew hit .162/.237/.299 last year, everyone blamed the fact that he didn’t sign with anyone until May, missed spring training and was just never able to get himself in game shape. The Yankees brought him back on the cheap at $5 million, hoping he would find his stroke again and end up being worth a lot more than they paid. However, like so much crap I’ve bought at tag sales thinking I was getting a bargain, Drew is showing why nobody else wanted him, and why the Yankees should have just left him on the heap last season.

Through 32 games and 138 plate appearances, the rotting corpse of Stephen Drew has hit just .183, and his OPS+ was a putrid 69 before Friday night’s game. He hasn’t homered since April 21 and has only 10 runs and 12 RBI on the year. I’m pretty sure J.D. Drew could come out of retirement and put up slightly better numbers than his younger brother has. Also, while Stephen was getting some key hits in important situations early in the season, that well has dried up too. Over the last couple of weeks, I feel like he’s left more men on base than anyone on the team other than Brian McCann (but that’s a story for another time). Look. We’ve all been tempted by tag-sale garbage. We should have known that old record player held together by tape wouldn’t last, especially when the little old lady selling it to us laughed as she gave us our change, but we bought it anyway. We all make mistakes. That record player belongs at the dump, and so does Stephen Drew’s baseball bat.

While Drew has already been losing some playing time to Jose Pirela, I’m now starting to wonder if it’s time to throw Rob Refsnyder into the mix too. After a slow start, Refsnyder has really gotten his bat going of late, at one point reaching base in 21 straight games and raising his slash line to .312/.378/.440. I know Refsnyder had a rough spring in the field, but he’s a much better offensive option for a team that’s been struggling to score runs of late.

Moving onto David Carpenter, I was excited when the Yankees traded for this guy during the offseason. He was absolutely nasty in 2013, and quite good in 2014. When he struggled early, I posted to this very blog that it was OK because Shawn Kelley struggled early in his Yankees career, before turning it around and playing a pretty key role in the Yankees bullpen for two years. Fool me for one month, David, shame on you. Fool me for two months and give up runs and homers just about every time out… actually, no. Still shame on you, because you’ve been quite terrible.

After blowing the lead on Tuesday night against the Nationals by allowing a solo home run to Wilson Ramos, Carpenter’s ERA now stands at 5.51 in 17 appearances and 16.1 innings. Frankly, I was surprised it was that low. He has allowed a run or more in five of his last seven outings and even in the one he didn’t allow runs in, he didn’t look all that great. Frankly, it’s clear that Joe Girardi has lost faith in Carpenter, so he shouldn’t be on the team. You could point to a guy like Esmil Rogers, who has also struggled and could be blamed for the team’s recent woes too, but at least Rogers has looked good at some point this season. Carpenter never has. I say DFA him and hope he clears waivers. Even if he doesn’t, I don’t think the move will come back to haunt anyone.

The Yankees have plenty of options chomping at the bit in the minors right now. Just to name a few: Danny Burawa, Joel De La Cruz, Jacob Lindgren (hello), Mark Montgomery, Jose Ramirez and Tyler Webb. I mean, hell, I think Nick Goody could probably come up from Double-A and do at least as poorly as Carpenter right now. They could also look to use some of their kids to make a trade, but I wouldn’t waste good prospects on middle relief. Maybe that’s just me, though.

Anyway, I know that these two guys only represent just two of a handful of issues plaguing the Yankees right now–they really need rotation help more than anything–but that could be on the way soon with the return of Masahiro Tanaka and possibly Ivan Nova, so that’s not an immediate concern. I certainly don’t have anything personal against them, and I wish them well, but Carpenter and Drew must go. I think I hear the garbage man coming down the road.