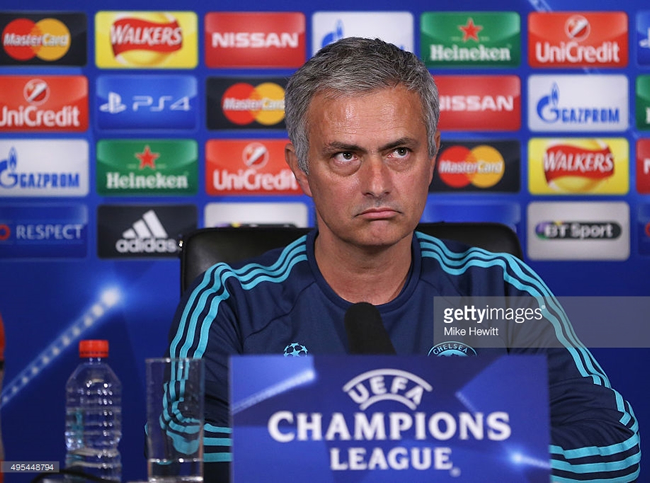 So Chelsea lost again over the weekend, and Manager Jose Mourinho is already hearing the calls for his head. I think I mean that metaphorically, but I wouldn’t put it past the Chelsea faithful (a passionate fan base with a history of neo-nazism sprinkled in for fun), to actually try to harm the portuguese manager if things don’t turn around soon. No matter the form it takes, Mourinho’s ultimate demise is the current hot topic at Stamford Bridge, and his figurative head could actually roll as early as this weekend.

First of all, let’s put this into some perspective. Chelsea is one of the wealthiest teams in the PL, and their roster boasts a who’s who of unbelievable superstar talent. Diego Costa, Cesc Fábregas, Pedro, Eden Hazard, Radamel Falcao, Oscar, Gary Cahill, Willian, Branislav Ivanovic and Thibaut Courtois are just some of the names that stand out from the team sheet every weekend. Sure, they’re not all playing well or are necessarily healthy, but even with some of their reserves forced to play, it’s an embarrassment of riches. Furthermore, Mourinho has a reputation for being a bit of a prima donna, but there has never been any doubt about his coaching ability. He has won everywhere he’s gone, from Porto to Inter Milan to Real Madrid to Chelsea, and he’s widely recognized as one of the best coaches in all the game. Great coaching and top-notch talent should combine to create a winning team. Chelsea did just that last season, taking the Premier Legaue title with relative ease, so what’s happening?

Getting back to this season… The 3-1 loss at home against Liverpool this weekend was the Blues’ third in six games at home. Do you know how many times Mourinho had lost at Stamford Bridge before this season? Once. In 99 games! Overall, Chelsea has lost six of their 11 matches and only managed three wins on the young season. They currently sit in 15th place on the table, 10 spots (9 points) behind even a Euro League spot, let alone a Champions League appearance or a chance to repeat as champions. In fact, they’re much closer to the relegation zone (just four points ahead of Newcastle United) than they are to any of the good sides of the table. This is the team that won the league by eight points just one year ago. To say that these beginnings have been “a little disappointing” is like saying that Diego Costa looks “a little like a slightly made over caveman.” The fact that Mourinho hasn’t been tarred and feathered on the streets of London should be considered a huge personal victory.

Look. I don’t think Mourinho suddenly forgot how to coach, or that Chelsea’s stacked roster suddenly forgot how to fútbol. However, there are rumors that he is losing his squad. Earlier today, Fábregas had to talk to the press so that he could deny accusations that he’s leading a secret behind-the-scenes revolt against the coach. Veteran John Terry has also staunchly defended his manager and denied the mutiny, but how bad does shit have to get for a defending champion to even have such rumors floating about? I’d say pretty bloody bad, no?

According to the mill of rumors, the firing, or “sacking” as those charming Brits say, could happen as early as this coming Sunday’s match against Stoke City. The best part? Mourinho might not even be there to sign his release papers. He’s been given a one-match stadium ban for one of his ridiculous outbursts during halftime of the Liverpool game. It wasn’t even his first suspension of the season. Mourinho has always been known for his boorish demeanor and petulant behavior, but it’s all in good fun when the team is winning the Premier League. If you’re arrogant, defiant and ill-mannered when you win, people just call you confident. When you’re that way when your team is languishing in 15th place, you’re just an asshole. To top it all off, he’s currently being sued by a team doctor he had issue with earlier this season.

Mourinho has apparently lost his team. He’s losing games, and he’s had a bad go of it off the pitch to boot. I think Chelsea and Mourinho can both recover, but I think Stamford Bridge is burning, and the querulous manager needs to go somewhere else. Sidenote: If I’m David Beckham, I start reaching out to Pitbull, Gloria Estefan and whoever the hell else has any money in Miami right now so they can foot the bill to bring Jose to the “Magic City” in a few years. They can listen to “Fireball,” sing “come on shake your body baby do that Conga” and rule MLS together until the cows come home.