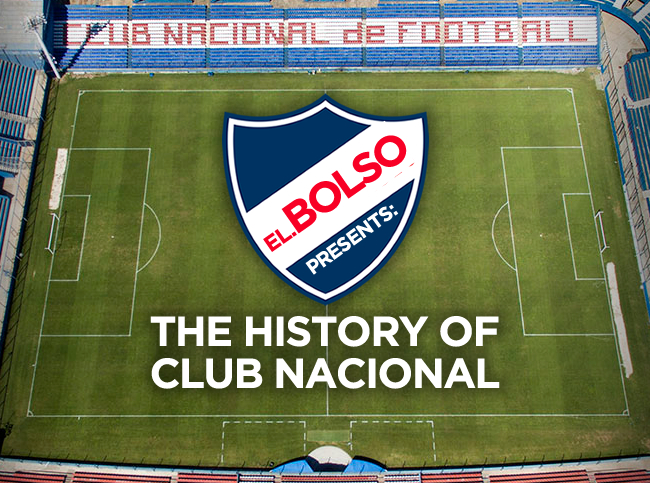 Hello soccer fans! El Bolso is here with another installment in the History of Nacional series. Today, we take a look at the 1998 season, when the Tricolores rose from the ashes of the mid-90s, one of Peñarol’s most successful periods, to set the tone for 21st Century dominance. Let’s get to it!

You know how all my posts end with Nacional on top of the world, but then it turns out that everything went to shit right after? Well, get ready for more of the same. The 1988 season was sort of an aberration in almost 2 decades of mediocrity for the Tricolores. They won the 1980 and 1988 Libertadores Cups, and league titles in 1980, 83, and 92… and that’s it. This was the time when the rest of the Uruguayan league realized they could win titles too, so it’s not like Peñarol was winning every year, but still, it was pretty embarrassing. And then El Quinquenio came.

See, back in the day when only two teams won the league title, it wasn’t unheard of for one of them to rack up a pretty big run. Nacional had 4-year (1969-72) and 5-year (1939-43) runs, as did Peñarol (1935-38, 1958-62). As the league became more competitive, however, that sort of thing became harder to achieve; in fact no one had been able to win even 3 in a row since the Manyas did it in 1973-75. That changed immediately following Nacional’s 1992 championship season, as Peñarol ran off their second 5-year streak. Was El Bolso glad to have moved to the US a few years before? You bet your ass he was. By 1997, wearing Tricolores gear in public was basically an invitation for scorn.

So how do you recover from an incompetence streak of historical proportions? Well, you need to take a look at your player development system, your governance structure, your relationships with the agent community, your facilities, your… wait a minute… WAIT! OH MAH GAWD! IS THAT… IS THAT HUGO DE LEON’S MUSIC?!!!

In fact, that’s exactly what it was, fans. Desperate to find any link to the glories of the recent past, Nacional’s executive board once again looked to Hugo de León. Now, the guy was 40 years old and hadn’t played competitively since 93, so they couldn’t just plug him into the back line, but he had been coaching in Brazil for the previous 2 seasons, so they hired him to manage the team in the upcoming 1998 season. He would be the one to lead the renaissance. Hey, it worked last time.

There was one teensy weensy problem, though: De León, who spent many years as a player in Brazil, had received his coaching certification there, and that was just not good enough for the Uruguayan manager’s union. Because you know, what the fuck does Brazil know about putting together successful soccer teams, right? Anyway, the union did not recognize De León’s credentials and asked that he go through their own certification program. De León argued that if his diploma was good enough for FIFA then it should be good enough for Uruguay, and politely told them what they could do with their certification.

And so began the De León wars, a years long, pointless conflict during which he was allowed to coach the team but could not set foot on the actual field during games, and every so often the union would threaten to strike if he didn’t get properly certified. You’d think the Uruguayan Association would step in at some point and force someone to give in, because you apparently have not been paying attention to all of the writing I’ve been doing over the years about South American soccer. De León spent 3 years as Nacional coach and this was a running subplot the entire time; when he returned for a second go in 2004 it was brought up again. Eventually it was resolved in some way, but who gives a crap. The lesson here, as always, is that you can force people to leave middle school, but you can never make them abandon the middle school attitude.

Getting off on the Right Foot

Anyway, De León immediately set out to change the culture around a team that had spent 5 years losing final after final to their traditional rival. See, 1993 was the last year that the Uruguayan league was played as a double round robin where the team with the most points at the end was the champion (you know, how everyone in Europe does it to this day). In 1994 Uruguay joined the ongoing South American trend of splitting the season into 2 halves and have the 2 champions meet in a final. The reason: money. Shorter tournaments make for more meaningful games, which encourages attendance, and having a big final at the end is like the big pot of gold at the end of the rainbow. Anyway, Nacional had lost end of season playoff ties to Peñarol in each of the last 3 years of the Quinquenio, and pretty much everyone (even Nacional fans) believed that the team just didn’t have the intestinal fortitude to beat the Manyas in a final.

The first step towards redemption was to win the Apertura championship and clinch a spot in the playoff, and Nacional did it in dominating fashion. This was the last year before the Uruguayan league began integrating teams from outside Montevideo into the top division, so there were only 12 clubs in the league. Nacional won 9 of their 11 matches and won the title by 7 points over second place Bella Vista. They made a statement right off the starting blocks, smacking Danubio around 7-1 in week 1 and beating Defensor in week 2. They won their first 5 matches before falling to Rentistas in week 6, and after losing again to Bella Vista in week 7 they reeled off 4 more wins to close out the schedule, including a 2-0 win against the defending champion Carboneros. Whatever happened in the second half, they would be there to decide the title.

The Clausura was a different story. Nacional again started strong, winning 4 of their first 5 matches, but lost again to Rentistas in week 6. They then tied 2 of their next 4 games, and that combined with a strong run by the “Bichos Colorados” (the Red Bugs, as Rentistas is known) left them 2 points behind the tournament leader entering the last round of matches (they did manage to win the Clásico 4-2, so there’s that). So heading into that last week, the fans were worried. I mean, they knew they would not be facing Peñarol in the eventual final, so there’s that, but Rentistas looked like a pretty scary opponent, given that they had swept the regular season series against the Tricolores. Besides, when you’re coming off 5 years of repeatedly falling short, you’re predisposed to expect the worst.

Rentistas played Danubio, which had recovered from finishing next to last in the Apertura to have a strong Clausura, and the Bichos Colorados could not clinch the second half title, losing 2-0. That left the door open for Nacional, and the Bolsos took advantage, beating Jobu’s boys Huracán Buceo 2-0 and clinching the Clausura. How do you take a team that is used to losing the big game and turn them into champions? Well, one way to do it is to avoid the big game altogether, and that’s what Nacional did. As winners of both the Apertura and Clausura, they were crowned league champions automatically, the only time in over 20 years of split season tournaments that no final playoff has been scheduled (there was one other year where one wasn’t played, but we’ll get to that next time). If you want to learn more, take a look at this hour long special on the 1998 season.

So there you have it. After years of suffering, Nacional fans were once again able to walk the streets of Montevideo abuse-free. More importantly, De León’s team started the Tricolores on a path that would make them the most successful Uruguayan soccer club in the 21st Century,and it hasn’t even been close. But that’s a story for another time.

This is it for me, fans. I’ll be back next time to wrap up this series, but for now here’s a look at the last game of the 1998 season: