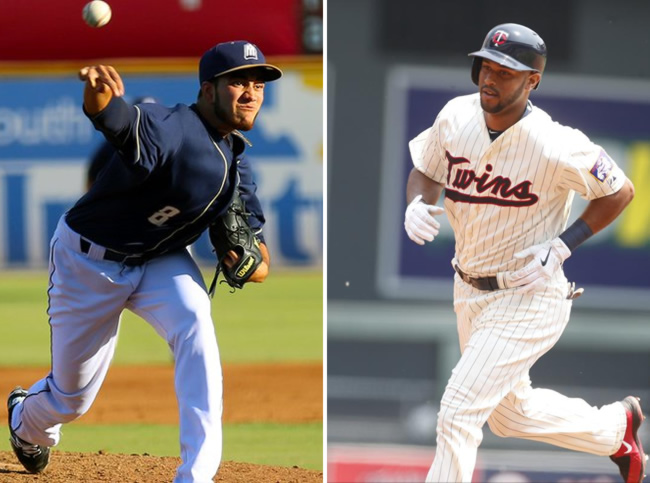 Over the last couple of years, the narrative from the Yankees front office has been that they want to avoid spending money (perhaps some buyer’s remorse following the questionable contracts they doled out after the 2013 season), and improve by using their home grown players on the field and in trades. That narrative kicked off on Wednesday, when the Yankees turned two of their own kids into a couple of helpful pieces. They traded Jose Pirela to the Padres for a AA pitcher named Ronald Herrera and John Ryan Murphy to the Twins for Aaron Hicks. Let’s say goodbye to our exes and welcome in our new friends!

Jose Pirela traded to the Padres for Ronald Herrera

Whatever the reasons, Pirela never quite earned the confidence of Joe Girardi or the front office. Well, I can think of two reasons. He couldn’t consistently hit major league pitching, and his defense was questionable. Well, I guess those are pretty damning reasons, aren’t they? It’s a shame, because he was a guy that crushed AAA pitching, slashing .311/.362/.435 in 195 games.

He did impress during a brief call up in September of 2014, slashing .333/.360/.542 in seven games, but couldn’t recreate that success in 2015. In 37 big league games he only managed to hit .230/.247/.311. In a season when the Yankees had Stephen Drew hitting under .200 for most of the year, Pirela couldn’t even carve regular playing time for himself. He’ll be 26 in a week, so there’s still some potential upside for the Padres, but I think the Yankees had just seen everything they wanted to see from Jose.

In exchange for Pirela, the Yankees got Ronald Herrera, a 20-year old right-hander who made it all the way to AA last season. He struggled a bit for the Padres’ AA outfit in San Antonio, putting up a 4.53 ERA and a 1.420 WHIP in eight starts, but he was also among the youngest players in the league, so there’s still plenty to like about him.

According to @LoHudYankees on Twitter, one scout described Herrera as a “20 year old who was up to AA this year. Can command 3 pitches, potential for solid ML breaking ball. Up to 95.” No one thinks this guy is going to be a star, but if he can throw 95 mph and has two secondary pitches, sign me up. From what I’ve read, Herrera’s biggest asset is his precise control, which is always great to have in such a young pitcher. Also, not for nothing, but 20 year olds don’t get pushed to AA unless someone sees something in them. I’m intrigued to have Herrera on board, and I’m curious to see how he’ll fare at Trenton (I assume) this season.

John Ryan Murphy traded to the Twins for Aaron Hicks

This trade, for me, was less of a no-brainer than the Pirela deal, but still one that I approve of. I love the job that John Ryan Murphy did this season in his first full year as the Yankees’ backup catcher. In 67 games, the 24-year old played in 67 games and slashed .277/.327/.396 with an OPS+ of 103, 9 doubles, a triple, 3 home runs and 14 RBI. Although he comes with a reputation for being a solid fielder, he did have 7 passed balls and 3 errors this season, and only threw out 28% of base runners (the league average is 32%, according to Baseball Reference). Overall, he calls a good game, so I was happy with his performance. It’s a whole lot better than what a lot of other teams get from their backup catchers.

Unfortunately for John Ryan, he wouldn’t have been starting for the Yankees for at least three more seasons anyway. He’s blocked by Brian McCann, who is a much, much better hitter, makes much more money and even had a much better defensive season than Murphy did in 2015. On top of that, the Yankees have other people capable of backing McCann up, including Gary Sanchez, whose bat appears ready to help the big league team just about now. Like any smart team, the Yankees used one position of strength to help improve an area of weakness.

In Aaron Hicks, the Yankees got back a guy that plays elite defense at every outfield position, and up until a couple of seasons ago, was one of the most highly regarded outfield prospects in all of baseball. He fell off of some lists, at least in part in my opinion, because the Twins rushed him to the majors. He was named the team’s starting center fielder to open the 2013 season despite never having played above double-A ball, and struggled from the beginning. He eventually lost his confidence so much that he stopped switch-hitting, choosing instead to focus only on his right-handed swing.

He seemed to turn a bit of a corner last season, as he went back to switch-hitting and finally began displaying the power and speed combination that made him the highly regarded prospect he was in the first place. Overall, Hicks slashed .256/.323/.398 with 11 home runs, 13 stolen bases and a 95 OPS+. He really shined against lefties, however, hitting .307/.375/.495 with 6 home runs in 112 plate appearances. Hicks brings two other big things to the table. For one, he’s still just 26 years old, and could still fulfill his full potential. Secondly, he’s going to be making somewhere in the $500,000 range.

In the worst case scenario, Hicks can be what Chris Young was last year, but with much better defense and for about one-fifth the cost if Young ends up making what he made last season. He’s also a lot younger than Young. In the best case scenario, Hicks gives the Yankees the flexibility to make some other trades, including one involving Brett Gardner. I’m excited to have him on the roster, but I’ll hold off on my full evaluation until we see how the rest of the offseason pans out for the Yankees.