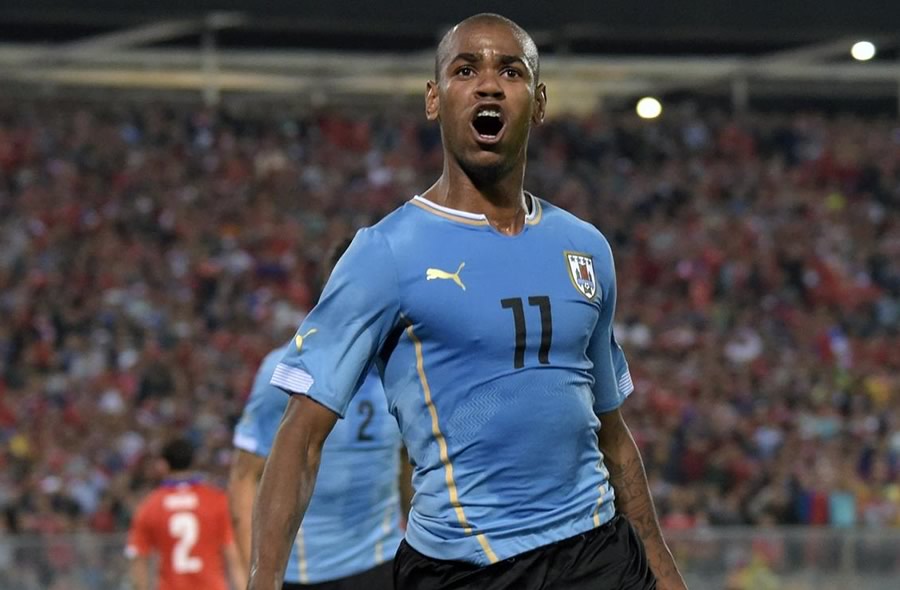 We haven’t done this in a while, but I know I’m a big fan of the Get to Know a Uruguayan series, so I figure you are too. Also, Uruguay kicks off their 2015 Copa América group stage against Jamaica mon tomorrow at 3:00 PM ET. I think it’s time we all got to know the new kid on the block, 22-year old striker Diego Rolán.

We’ve talked about this during our Copa coverage already, but this tournament is a gigantic opportunity for Rolán to cement himself as the latest, potentially greatest Uruguayan striker. Luis Súarez is still suspended for nine full games, which opens the door not only for Edinson Cavani to take over as the team’s number one guy (which I’m sure he’s been waiting to do for years), but also for someone to be his number two. The way Rolán has played the last year or so, I think he can do it. If he can, he’ll make Cavani stronger in the process too. Every number one needs a good number two, after all (no, that’s not a poop joke).

Anywho, Diego Alejandro Rolán Silva was born on March 24, 1993 in Montevideo, Uruguay’s capital city, which is where yours truly is from. As a youth, he was signed to the development program for Defensor Sporting, whom you’ve heard a lot about courtesy of El Bolso, in the Charrúa Report series. Rolán made his pro debut for the first division club in October of 2011 and scored his first goal just a couple of weeks later against Cierro Lago FC. Over the next couple of seasons, he scored 10 goals in 38 games for Defensor. That, coupled with his 4-goal performance at the 2013 U20 South American Championships, attracted the attention of a lot of European clubs. In the end, FC Girondins Bordeaux won out, sending just under $2 million to Defensor for the then 19-year old’s services.

It took a while for Rolán to get his feet wet on Bordeaux. Over his first two seasons, he only made 27 starts, netting only twice in that time. He was, however, a stranger in a strange land, and barely 20 years old, so he probably did about what the team expected from him. This past season, however, he truly broke out. In 36 games and 28 Ligue 1 starts, Rolán scored 15 goals for Les Girondins, establishing himself as their top scorer and leading the team to a sixth place finish. He added one other goal in non-league play, bringing his total to 16. At just 22, he’s been a revelation for Bordeaux, who might have an interesting choice to make in the near future if he continues to improve his play.

Internationally speaking, Rolán is just a pup. Coach Óscar Tabárez has been bringing him along slowly. As we mentioned previously, he had a very good run with the U20 team, and has only recently been brought on to represent the senior club in friendlies. Like I said, opportunity came a knockin’ after Suárez went a-bitin’ against Italy last summer. Rolán is coming off a very impressive performance in a friendly against Guatemala, where he scored a goal and almost netted at least one other one that I saw, and he also scored in a friendly against Chile in November. I know he’s looking forward to scoring some meaningful goals in this tournament, and I think we’ll see him net at least one. I’m going to go out on a limb and say that it will be he who scores the first non-penalty kick goal (I have to cover my ass, because Cavani takes penalties) for La Celeste in this Copa. After all, Cavani will be too busy thinking he’s playing against an African team (lo siento, Edinson!).

I’m looking forward to what Rolán will bring to the future of this Uruguayan squad. Suárez will eventually reclaim his spot, which will move Rolán back to the bench, but a lot can happen between World Cups and, if Uruguay manages to qualify for Russia 2018, I predict that Rolán will be a huge reason why, and he’ll also get to show his mettle on the big stage, as he hits his prime three years from now.

Here’s hoping for a nice run in Chile for Diego! Watch some highlights:

3 thoughts on “Get to Know A Uruguayan: Diego Rolán”