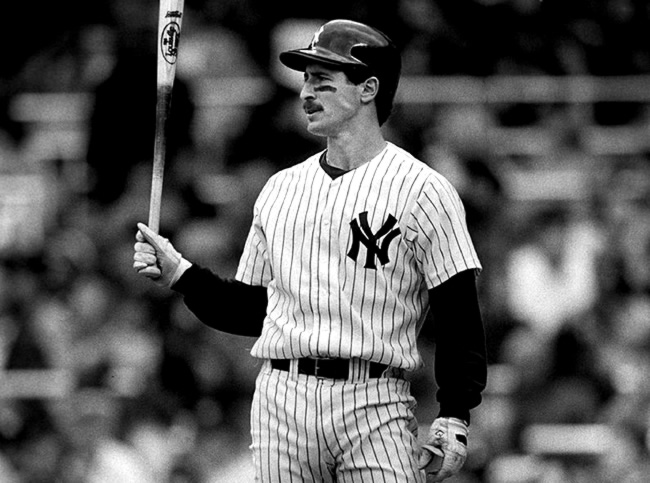 This post originally appeared on Pinstripe Alley one week ago. You can read the original here.

Were you a white guy with a mustache in the 1980s? Well then, odds are you played on the New York Yankees. From greats like Don Mattingly and Ron Guidry to veterans like Don Slaught and Lee Guetterman, everyone on those teams seemed to be sporting the look. Today, let’s take a look back at another of these mustachioed wonders, Mike “Pags” Pagliarulo, a man who held down third base in the Bronx in the 80s.

After a Hall of Fame career at Miami, aka “The U,” during which he batted .315 over 176 games, Mike Pagliarulo was drafted by the Yankees in the 6th round of the 1981 amateur draft. The native of Medford, MA used his power and reputation as a solid defender to climb his way quickly through the Yankees system. After reaching AAA Columbus as a 24-year old in 1984 and struggling to a .212/.293/.404 slash line through 58 games, he was surprised by a call up to the big leagues. You see, the Yankees had been struggling defensively in the infield, so when Toby Harrah hit the disabled list in early July, the Yankees took a shot on Pags, knowing he would at least catch the ball and throw it to first base properly.

Fresh off of a four-hour bus ride and a four hour flight (he had traveled to Tidewater overnight with Columbus before having to join the Yankees), Pags had a monster game, knocking a single and two doubles while scoring two runs and driving in one, and making all of his plays in the field to boot. Pagliarulo took over third base for the rest of the season and put up decent numbers, slashing .239/.288/.448 with a 104 OPS+ and 7 home runs in 67 games. His rookie performance was good enough that he was handed the starting third base job out of spring training in 1985, and wouldn’t relinquish it until he was traded in 1989.

His two best seasons in pinstripes were 1986 and 1987, when he combined to slash .236/.310/.472 with 50 doubles, 6 triples, 60 home runs and 158 RBI. He became another reliable power bat in a lineup that already included Don Mattingly and Dave Winfield. More importantly, he played a very solid third base throughout his tenure, which helped solidify a left side of the infield that, for the Yankees, had seemingly in flux for most of the decade (the shortstop situation wouldn’t be stabilized until Derek Jeter took over full time in 1996).Unfortunately, although the team experienced a modicum of success, even winning 98 games in a hard luck second place 1985, the Yankees never made the playoffs during Pagliarulo’s time in the Bronx.

In 1988, Pagliarulo’s production dipped severely, as he only managed to hit .216/.276/.367 and mustered only 15 home runs and an OPS+ of just 80. What was thought to be a slump turned into much more, when he started the next season poorly as well. Through 74 games, Pags hit just .197/.275/.299 with 4 home runs and an OPS+ of 60. Yikes. On July 22, 1989, the Yankees reached the limit of their patience with him, and they traded him, along with Don Schulze, to the Padres for veteran right-hander Walt Terrell and a player to be named later that eventually became Freddie Toliver.

The trade was felt by players and fans alike, because Pagliarulo had become a very popular player despite his recent struggles. He was viewed as a guy with great passion and team spirit who played the game the “right way.” He was also never afraid to stand up for himself, often talking to the media about his disappointments in the organization, especially when it came to contract talks and arbitration hearings, which he lost seemingly every year. Said Mattingly, who was one of Mike’s closest buddies on the team, of the deal:

“It bothers me because I’m a friend of Mike’s and I like the way he played, but I’m hoping it works out for him. It’s hard to build anything when you keep changing. We need some type of foundation, a base.”

Pagliarulo struggled through the end of the year as the third baseman in San Diego but managed to hold onto his job until Bip Roberts was called up the next season. In 1991, Pags moved onto Minnesota, where he had his greatest achievement while playing in the stadium in which he’d made his major league debut in 1984. He spent his time in Minnesota as mostly a part-time player, but managed to hit a career high .279 in 1991. That fall, he helped the Twins win the World Series, homering in the ALCS against Mike Timlin of the Blue Jays, and in Game 4 of the World Series off of Hall-of-Famer John Smoltz. The Twins ended up winning a dramatic Game 7, 1-0 in 10 innings (Jack Morris famously pitched a complete game and won the MVP of the series), and Pags had won his first and only World Series ring, which is more than many of his Yankees teammates would ever be able to say. To add slight insult to injury, the Yankees would struggle to find a third baseman for another couple of years, until another mustachioed phenom, the great Wade Boggs, joined up in 1993.

Pags finished his career with a season in Baltimore, one in Japan and a final one on the rangers, retiring after the 1995 season and an 11-year career in which he hit 134 home runs. His final Yankees numbers looked like this: 703 games, .229/.300/.427 with 111 doubles, 105 home runs and 337 RBI. Those numbers aren’t much to write home about, but his 32 home runs in 1987 make him one of only three Yankees third basemen to ever top 30 dingers. When you’re hanging out with Craig Nettles and Alex Rodriguez, it can’t all be bad.

These days, Pags’ glorious mustache may be gone, but let’s remember it, and him with the fondness they both deserve.