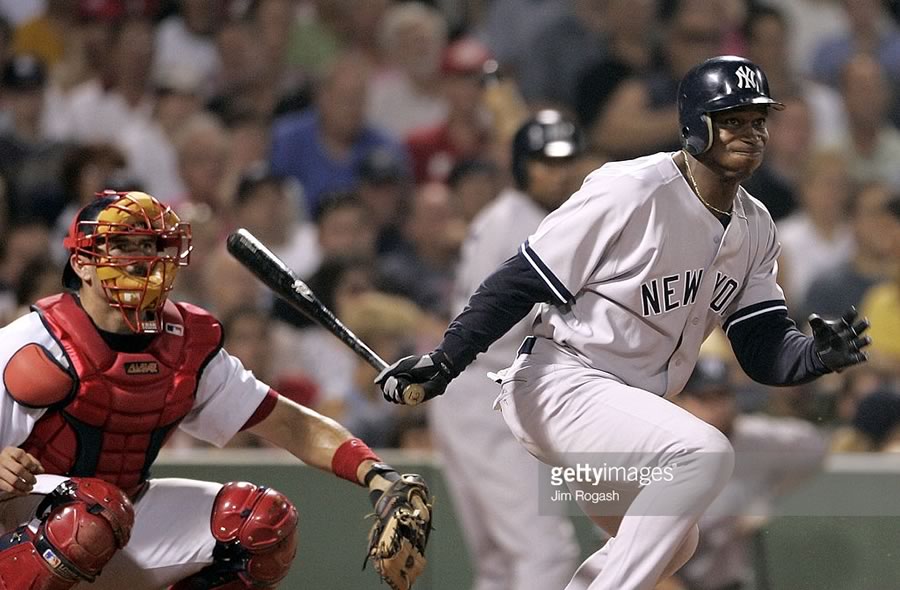 On Friday, the baseball world received news that Juan Pierre has officially retired. Pierre, who sat out the 2014 season after a terrible year with the Marlins in 2013, is best remembered by Yankees fans as the pesky singles hitter with blazing speed who helped the Marlins beat the Yankees in the 2003 World Series. That’s not how I choose to remember him. Instead, I choose to remember Juan Pierre as the reason the Yankees signed terrible Kenny Lofton in 2004. Let’s take a look at how Lofton came to be a Yankee, and his brief career in pinstripes.

In October of 2003, after Aaron Boone homered off of Tim Wakefield in the bottom of the 11th inning of Game 7 of the ALCS to send the Yankees to the World Series, an exhausted fan base (and probably the Yankees themselves) turned their attention to the World Series, and the Florida Marlins. Now, I’m going to be honest with you. When the Yankees beat the Sox in such dramatic fashion in that ALCS, they might as well have won the World Series right there. I never really got fired up for that series against the Marlins, and it seemed like the Yankees didn’t either. The Marlins took care of business in six games, and the chance at what would have been a 27th World Series title was gone for New York. Pierre was a huge reason why. The speedster hit .333/.481/.429 against the Bombers, adding two doubles, three runs batted in, a stolen base, and five walks in the six-game set.

Now you know George Steinbrenner, unlike his sons Hal and Hank, was not going to take that type of thing lying down. He immediately began combing the list of free agents to find his own version of Juan Pierre – a guy who could use blazing speed to wreak havoc against opposing teams and run his Yankees all the way to a World Series championship. Unfortunately, the only guy left with that kind of reputation was 36-year-old Kenny Lofton, who hadn’t been that type of guy since 1998. Not to say that Lofton was a bad player, but he hadn’t topped 30 steals since then, and his batting average had dipped as well. To his credit, Lofton had just had a monster last couple of months after being traded by the Pirates to the Cubs in July of 2003. The aging center fielder joined his fourth team in two years on July 23rd, and hit .327/.381/.471 in 56 games the rest of the way, with 3 HR, 12 SB and 39 runs for the Cubbies. Despite complaints from Brian Cashman and the New York branch of the Yankees hierarchy, and the fact that the Yankees already had Bernie Williams in center, Steinbrenner gave Lofton a two year deal worth $6.2 Million. He wanted his Juan Pierre, and he was going to have him.

For his part, Lofton said all the right things that offseason. He was even willing to be the designated hitter because of Bernie. The one thing Lofton wanted was to play every day. According to a New York times article that February, Lofton thought he could score 150 runs playing every day in the Yankees lineup. He also did his best to perpetuate the ridiculous idea that he could be a Juan Pierre for the Yankees in 2004. He said to the Times:

“He was basically doing what I did. Juan was doing what I’ve been doing for a long time. Did you see me in the last couple of playoffs? That’s what I do.”

To be fair, Lofton had performed admirably in the post season for the Cubs, Giants, and Indians the previous three seasons, but other than those 56 games in the Summer of 2003, it was clear that he wasn’t the player he was in the late 1990s with the Indians. Unfortunately, he was Steinbrenner’s guy, and so Joe Torre and the rest of the staff had no choice in the matter.

Lofton wasn’t awful Yankees in 2004, but he wasn’t good. He did not score 150 runs like he thought he could, but he also didn’t play every day like he expected to either. In 83 games for the Bombers, Lofton hit .275/.346/.395 with 3 homers, 18 RBI, an OPS+ of 95 and just 51 runs. He also struggled with a quad injury early on and only stole seven bases all season, which was by far a career low. My one real memory of Kenny was in a game on September 18th against the Red Sox, against whom the Yankees were battling for first place in the AL East. The great Yankees closer, Mariano Rivera, came in with a one run lead in the ninth and was unable to hold it. The winning hit was on a blooper to Lofton in center by future Yankee Johnny Damon that fell in. It seemed that Lofton, whether because of laziness or because he knew it was truly uncatchable, let the ball drop in. Cameras appeared to catch Mo yelling “Catch the ball!” towards Lofton, indicating that he maybe didn’t think it was Lofton’s best effort either. The beef was squashed after the game, but Lofton’s Yankees career wouldn’t recover. He did hit .300 with a homer against the Sox in that terrible ALCS, but was traded to Philadelphia for Felix Rodriguez after the season.

Lofton’s tenure in the Bronx was definitely forgettable. He wasn’t really wanted by anyone but Steinbrenner, he underperformed and was quickly forgotten about after the season. In case you’re wondering, Pierre had probably the best season of his career in 2004, hitting .326/.374/.407 with 221 hits and 45 steals. The Yankees still tried trading for him after the 2005 season, but he went to the Cubs instead. The dream was over, and we were left with no memories of Juan Pierre, just of Kenny Lofton, the guy whose apparent lack of effort made the unshakable Mariano Rivera lose his cool. Let’s hope that, with Pierre’s retirement, the memories of Lofton disappear too.