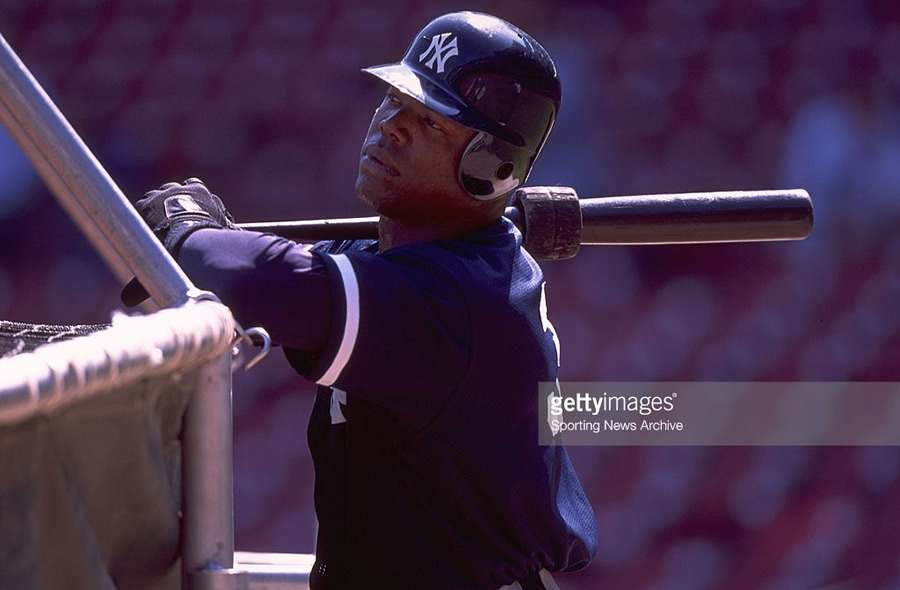 The Yankees have won 27 World Series in their storied history. If it wasn’t for our Forgotten Yankee of the day, they might have had one fewer parade down the Canyon of Heroes. Let’s take a quick look back at a guy who only spent three months as a Yankee but made an immense impact on one of their championship seasons. Let’s all remember Glenallen Hill.

In the year 2000, the Yankees were on a quest to three-peat as world champions. As the summer days got hotter, they tired of the struggles of Shane Spencer and Ricky Ledee in left, and started adding some firepower. In late June, they traded for David Justice. About a month later, they made a seemingly much less impactful move, when they sent Ben Ford and Oswaldo Mairena to the Cubs for their 6’3″, 235 lbs. power hitter, Glenallen Hill. Prior to joining the Yankees, Hill was mostly known as the guy who, when he was a rookie in 1992 with the Blue Jays, dove through a glass table because he was having a crazy spider dream, but he knew how to sock dingers, and the Yankees needed power. Boy did they get it.

With the Cubs that season, Hill had been hitting .262/.303/.494 with an OPS+ of 100, 11 homers and 29 RBI in 64 games. He had also hit one of the longest home runs in the history of Wrigley Field that year, which is probably part of what caught Brian Cashman’s attention. Whatever it was, Hill took full advantage of the opportunity in the Bronx. He started with a bang, nailing a solo homer in his first Yankees at-bat on July 24th against the Orioles, and he never stopped hitting the ball over the fence. Over his first month in pinstripes, Hill hit like a cartoon character, slashing .429/.459/1.000 with 12 homers and 23 RBI in 74 plate appearances over 17 games. That’s something that’s hard to do on a video game, let alone in real life and against actual human pitchers. Overall, he played 40 games for the Bombers that season, hitting .333/.378/.735 with an OPS+ of 133, while crushing 16 homers and driving in 29 in just 143 plate appearances. Wowsers.

As impressive as his individual effort was, it was more impressive because he really helped the team in the standings. On the day of the trade, the Yankees were 50-41, and held just a 1.5 game lead on the Blue Jays, and a two-game lead on the Red Sox. Over the next 53 games, they went 34-19, and built their lead over the now-second place Red Sox to eight games. I know that Hill doesn’t get all the credit for that, but he did hit .347/.402/.743 with 12 homers and 25 RBI in just 31 games (26 starts) during that time. His season highlights included a pinch-hit grand slam in the top of the 9th of a 9-5 win against the Twins, 2 home runs against the Angels on August 18th and a broken bat three-run bomb against the against the Rangers on August 21.

Understandably, Hill’s bat cooled off a bit during September. In 14 September games, he hit just .244/.300/.543 (still an impressive power output) with four homers and five RBI. The Yankees cooled off during September too, losing seven in a row and 15 of 18 to close the season. The ended up with only 87 wins and just 2.5 games ahead of the Red Sox. Coincidence? Who can say? Fortunately, the Yankees were able to get it together in the post season and still brought home their 26th World Series title. Hill went just 1-for-17 in the playoffs, but he did enough heavy lifting during the summer that, without him, I’m not sure the Yankees win the division. That means no playoffs, no World Series and no parade.

The Yankees traded Hill to the Angels for Darrin Blakely over the winter, and the slugger was out of the majors after the 2001 season. He’s been coaching in the Rockies system since 2003, and was recently named manager of the Albuquerque Isotopes (I hear they have a great mascot), the Rockies Triple-A affiliate. I’d definitely be remiss if I didn’t mention that he was a part of the infamous Mitchell Report (although the report said that he bought HGH from Kirk Radomski but didn’t use it), but man, he made the summer of 2000 one to remember.

Do you have any memories of Hill, or that 2000 season you want to share? Let us know below!