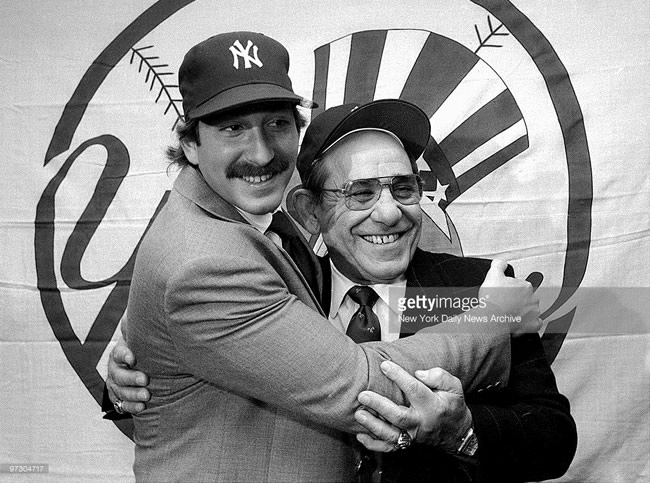 This post originally appeared on Pinstripe Alley one week ago. Feel free to read the original here.

Like you guys, I am mourning the loss of Yogi Berra this week. Yogi was a great baseball player, and a better man, and the world is definitely feeling this one. My colleagues at Pinstripe Alley have done a wonderful job of remembering Yogi this week, so I figured I’d take a different spin on it. Some fans might not realize that Yogi wasn’t the only Berra to play for the Bronx Bombers. This week’s forgotten Yankee is the son of the Hall of Fame catcher, Dale Berra.

I imagine it must have at least a little tough growing up the son of one of the biggest legends in Yankees history, but Dale Berra did OK for himself as a baseball player. He was a highly-touted prospect coming out of Montclair High School in New Jersey, and the Pirates made him the 20th overall pick in the 1975 draft. Unlike his legendary dad, Dale started his professional career as an infielder and played mostly third base and shortstop throughout his time in the big leagues. He also made his major league debut at a younger age than Yogi, making it to the bigs with Pittsburgh at the age of 20 (Yogi didn’t debut with the Yankees until he was 21). Dale brought with him to the majors a reputation as pretty good hitter with a decent amount of pop to boot. Unfortunately, he was unable to translate most of that to the big leagues.

In 1984, Yogi was hired for his second stint as Yankees manager (the first coming 20 years earlier), and led the team to an 87-75 record. That offseason, he fulfilled what I’m sure was a dream of both he and Dale’s, as the Yankees traded Tim Foli, Steve Kemp and cash for Alfonso Pulido, a young Jay Buhner, and Yogi’s son, Dale Berra. Said Dale of the trade:

“He’s the kind of guy who would only give a suggestion in response to someone asking for advice. He wouldn’t think of going to the general manager and asking for a trade. Of course, once the trade happened he was very happy about it. I knew the trade was in the works a couple of weeks before. I had great anticipation and was delighted when it happened. It was a terrific opportunity, going to play for dad, even though I knew I wasn’t going to be playing every day.” – Dale Berra, from “That Was Part of Baseball Then”: Interviews with 24 Former Major League Baseball Players, Coaches and Managers By Victor Debs, Jr.

While Yogi was fired just 15 games into the 1985 season (this led to his self-imposed 15-year ban from Yankees stadium, and the incredible first pitch ceremony before David Cone‘s perfect game), Dale stayed with the team for a season and a half. Berra hardly made a splash in the history of the franchise, playing just 90 games over those two years, before being released at the end of July, 1986. He spent time at third base, shortstop and DH in that time, slashing .230/.285/.336 with an OPS+ of just 71. He managed just 3 home runs and 21 RBI in his 217 career Yankees at bats. Incidentally, Dale was given the number 2 on his jersey during his time in the Bronx. The number, of course, would eventually belong to Derek Jeter, who had a very close relationship with Yogi over the last twenty years or so. As far as a signature Yankees moment, I’m not sure Dale had one. I wouldn’t say the video below is even close, but it is one of my favorite all-time plays, even though he’s on the short end of it.

After his release, Berra managed to sign on with the Astros–where Yogi was employed as a coach–to finish the season in Triple-A Tucson, and spent some time with Houston in 1987, but he was released in October of that year and was soon out of baseball. He didn’t have the legendary career that his dad did, but he spent 11 years in the big leagues, which ain’t half bad. He was a part of that famous “We Are Family” 1979 Pirates team that won the World Series, and even led the NL in intentional walks in 1983! I’m assuming he hit in front of the pitcher, but it still counts. Oh, and he also once held the record for the most times reaching base on catcher’s interference in a single season (seven times in 1983), which was broken by former Yankee Roberto Kelly in 1992.

Unfortunately, it’s off the field where Berra made his most famous, if not infamous, splash. In 1985, while an active member of the Yankees, he testified in front of a Pittsburgh grand jury about the rampant cocaine use in MLB clubhouses. His testimony, along with that of other players of the time like Lee Lacy, Lee Mazzilli, Dave Parker, Vida Blue, Enos Cabell, Keith Hernandez and Tim Raines and others, led to the Pittsburgh drug trials that September. Berra and the other players were granted immunity for their testimony, but this was still a huge scandal because it really brought the cocaine and amphetamines culture of the 1980s baseball clubhouse to the forefront for the first time. Berra ended up revealing a lot of negative aspects of that era, including how easy it was for players to get cocaine, and how common it was for players to share cocaine with each other in the clubhouse. He was suspended by MLB, but like the other players, agreed to a deal that left him subject to a hefty fine and increased drug testing. While this is definitely a bit of a black mark on his record, at least these hearings helped to change the culture of the game in a positive way, much like those players who testified to the grand jury about steroids twenty years later.

While Berra said he had quit doing cocaine in 1985, and never did it as a member of the Yankees, what happened to him in 1989 might call this into question. On April 21 of that year, Dale, along with 23 others, was arrested as part of a six-month investigation by the Morristown, NJ Police Department. He was charged with conspiracy to violate state narcotic laws, as part of a ring that allegedly moved $15,000 – $20,000 worth of drugs on a week-to-week basis. Luckily for him, he cut another deal to enter a three-year pre-trial intervention program. When he completed it in 1992, all charges were dropped.

Today, Dale, along with his brother Tim (who played for the Baltimore Colts) is one of the principles of LTD Enterprises. The company is controlled by the Berra family, and handles everything related to Yogi’s brand and image. It seems his troubled past is behind him, and I wish him, and the rest of the Berra family, my condolences today.