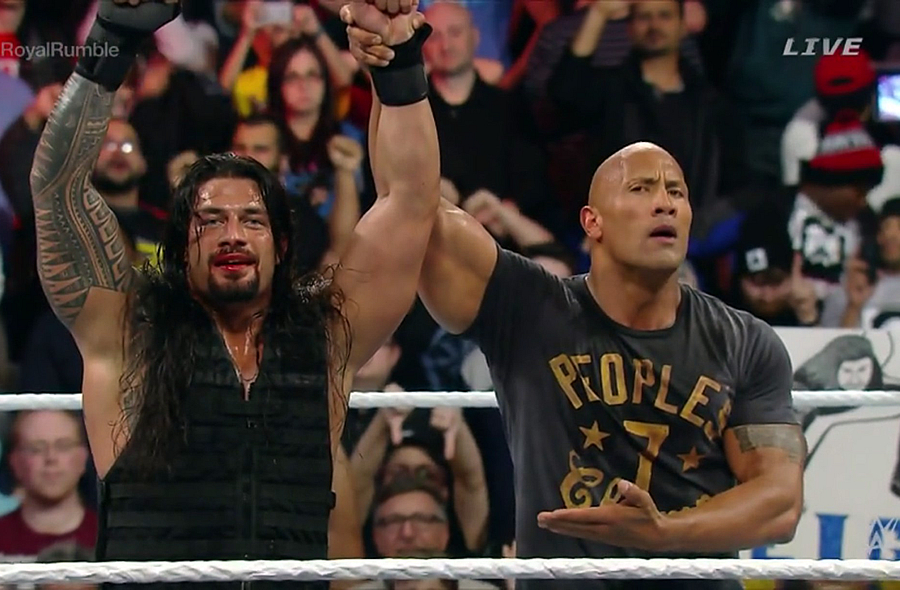 [dropcap]I[/dropcap] feel sorry for Roman Reigns. By all means (assuming he polishes up his work on the microphone), he’s an up and coming future star of the WWE. I’m sure when they wrote up the Rumble match, Vince McMahon and the WWE thought they were putting their stamp on a new star. Hell, they even sent The Rock out there after the Rumble ended to give the kid “the rub” so that fans would accept him. Unfortunately, Vinny Mac and his team of writers have no idea what the fans want, or they just don’t care.

It’s been clear for a few weeks now, ever since Daniel Bryan returned from his nearly year-long rehab of a neck injury, who the fans think is the top baby face in the company. It’s not John Cena, and it certainly isn’t Roman Reigns. It’s abundantly clear that the people love Daniel Bryan. The guy spent about 8 months on the shelf, and it feels like the fans love him even more now than they did when he won the straps at Wrestlemania 30. The way the Rumble match was booked last night, it’s also clear that someone backstage just hasn’t been paying attention, or is just a stubborn asshole. You guys make the call on that.

When Bryan came out at #10 and proceeded to kick everyone around the ring, the Philly crowd went absolutely bonkers. Before #16 came out, Bryan was gone. He lasted maybe 10 minutes in the match? The guy who is the clear and absolute crowd favorite wasn’t involved in any matches on the night, and spent only 10 minutes in the ring entertaining the fans? Are you kidding me? When Reigns came out at #19, and it became clear that he was, as had been rumored, the guy who was going to win the match, the crowd shit all over it. For the rest of the match, the crowd booed any time Reigns had any offense, and barely cheered for anything. The only guys that got sizable pops were Damien Mizdow (21), Dean Ambrose (25), Bad News Barret (27), Cesaro (28) and Dolph Ziggler (30), but none of them had an impact, and were all unceremoniously eliminated. Good job, WWE.

Worse yet, the story they came up with to end this match was that Reigns was left all alone in the ring with The Big Show and Kane, who had teamed up to eliminate basically everyone else the crowd loved. I’m sorry, but if someone backstage thinks that, in 2015, The Big Show or Kane have any credibility as potential Royal Rumble winners, they have their heads shoved way up their asses. Corporate Kane is basically comic relief at this point (he wrestles in black slacks, for crying out loud!), and the Big Show? Well, I discussed my feelings about him a couple of months ago. He absolutely stinks. The scariest thing he’s done in the last 10 years is cry on Smackdown. He cried! Sure, they did the surprise “oh no Rusev (who is awesome) was secretly not eliminated before and now he’s back in” trick, But Reigns made quicker work out of him than he had anyone all night, so what was the point?

This is where I feel bad for Reigns. After he won the match (or at least before the Rusev reveal) he was getting attacked by the defeated Kane and Big Show, when out came The Rock. The biggest star to ever come out of the WWE. The crowd went bananas, as well they should have, as The Rock cleaned house and saved Roman, his real life cousin. Then, when the Rock went over and raised Reigns’ hand in victory, here came the boos. In fact, Rocky was cheered any time he wasn’t touching reigns, but even he couldn’t get the Philly fans to stop booing Roman.

Again, this is not Reigns’ fault. It’s the fault of the guy backstage making all the calls, and ignoring the fans. If Bryan is still not 100% back from his neck issue, and that’s why he only lasted for as long as he did, then they should have made him come in later, and be involved in the final four or something. The fans would still have booed Reigns, but for only a few minutes, rather than a half hour. While, I think running out and canceling your WWE Network subscription is a bit rash, no matter how much the hashtag was trending after the Rumble, I can’t blame fans for being angry about this. It’s the second year in a row that they have clearly wanted Daniel Bryan to win the match, and instead had the WWE’s guy shoved down their throats (I still love you, Batista).

It really makes me wonder if it isn’t time for someone else to take over backstage, and put Vince out to pasture. Also, if it wasn’t for all that awesome library content, and NXT, I would probably cancel it. There’s very little reason to watch the main roster product right now.