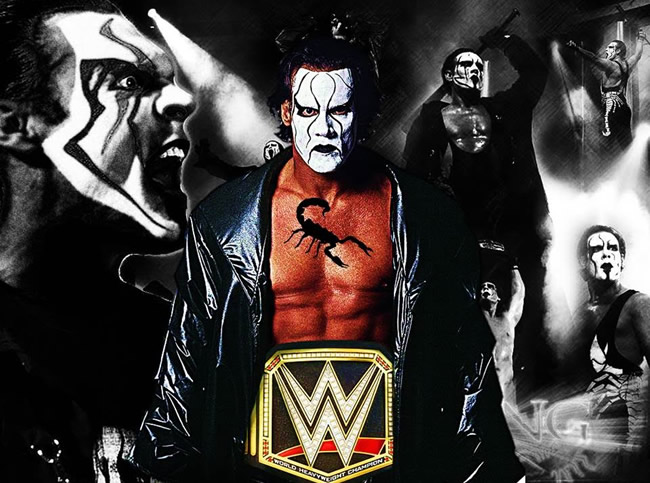 For those of you who haven’t been keeping up with WWE programming, you’ve missed something that some WWE fans have been waiting 30 years to see; Sting is going after the WWE World Heavyweight Championship. That’s right, the man who was the face of WCW for the better part of two decades (maybe a shared face situation with Ric Flair), is going after the one major title that has always eluded him. Is this awesome? A fanboy’s dream come true? Or is it just another old man stealing the spotlight from a younger wrestler? I honestly don’t know.

First of all, let me make one thing crystal clear. I don’t care how old he is, I think it’s awesome that Sting is finally part of the WWE product. He was one of the few guys that I made a point to watch during the pre-NWO era in WCW, and I always felt that the ball was dropped (either by Sting or WWE) when he wasn’t brought in after Vince McMahon bought out their rival from Atlanta in 2001. He ended up in TNA, where he had a main event run for seven years (something that WWE continues to ignore, for some reason), but who really watched that? Sting should have come over in 2002 to spearhead the invasion angle, and he should have won the WWE title back then.

Unfortunately, that simply wasn’t the case, so now we have to settle for the 56-year old version of one of the characters that helped WCW revolutionize the industry in the late 1990s. So, should this old man in face paint win the big belt from Seth Rollins at Night of Champions? In theory, yes. Yes he should. I’ll tell you why after you catch up with your Sting history in the video below.

For one, we have to ignore the age factor here, because WWE is completely ignoring it. They’re not booking Sting as an aging veteran climbing the mountain for his one and probably only shot at the title. He’s not being booked as an underdog at all. He’s being booked as a legitimate threat to Seth Rollins, and I think, at least in his promo work and from his look, he’s pulling it off just fine. The beatuy of a character that uses facepaint, and has such a bad ass wardrobe, is that the wrestler portraying the character can be older, and it won’t be as apparent to fans watching on TV. Did Sting look old to you when he was interrupting Rollins’ statue ceremony on raw? Did he look old yesterday when he destroyed the statue? No. He didn’t. Steve Borden might be old, but the Sting character is alive and well.

One contributing factor to the effectiveness of this character is Seth Rollins. I cannot be more pleased with the way the current WWE World Heavyweight Champion has acted throughout the buildup for this match. Rollins plays the cowardly heel champion perfectly. He talks the big talk, but poops his drawers when confronted with a legitimate contender. He puts it together for the big matches, but ultimately sneaks through and keeps his belt due to cheating, or some kind of wacky interference. When it comes to Sting, Rollins looks like he’s legitimately terrified. He’s not seeing 56-year old Steve Borden. He sees Sting; the guy who terrorized even the great Hulk Hogan during the peak of the NWO era. The way Sting is being presented, and the way Rollins is reacting, it’s like it’s 1996 all over again, and I love it. Also, for those of you who can’t get over Sting’s age, Vince McMahon won it at 54 years old in 1999, and Hogan had a sweetheart run at age 48 in 2002. In pro wrestling, an aging legend (or a non-wrestler with help) can always reach down and pull out a victory during the toughest circumstances. It’s not that far fetched, mostly because it’s a TV show.

Would I be OK with Sting taking home the WWE title on September 20th at Night of Champions? Sure. If he were facing anyone other than Seth Rollins. Unfortunatley, I really love Rollins as champion. He’s held the belt for six months now, and I’m just not ready for him to give it up just yet. I suppose it also depends on whether the plan is to take the belt away from Rollins and give it to someone else (making Sting a transitional champion… possibly for Sheamus?), or if the plan is to let Sting have it for a month and give it back. If the belt is going to change hands, I much prefer the latter scenario. I’d love Rollins to be champion until Wrestlemania 32, and for Sheamus to not win the title ever. I don’t care how red his hair is, or how big his briefcase is.

I think it makes just as much sense for Sting to win at Night of Champions as it does for him to lose that night. Sting showed that he can hang in the ring during his match against Triple H at Wrestlemania 31, and he’s had six more months to get himself in even better shape than he was back then. One thing I question, is whether Borden would really have signed with WWE if he knew he was going to wrestle twice this year and lose both times. You have to think they made him some promises somwhere, no? Would he really drop to 0-2? On the other hand, how long is Sting planning on sticking around if he wins the belt? As an attraction, he might be overexposed by a lengthy stay in the company, which would be bad too.

Anyway, I can’t really call this one. I think I’ll be happy with either result, assuming the actual match is booked well. I anticipate some shenanigans, whether it be Rollins cheating (he will), someone else form the past coming down to help Sting (someone will) or HHH somehow turning on Rollins to teach him a lesson, but it should be a good match. I’m intrigued to watch it all go down in two weeks on the WWE Network, which is only $9.99 a month.