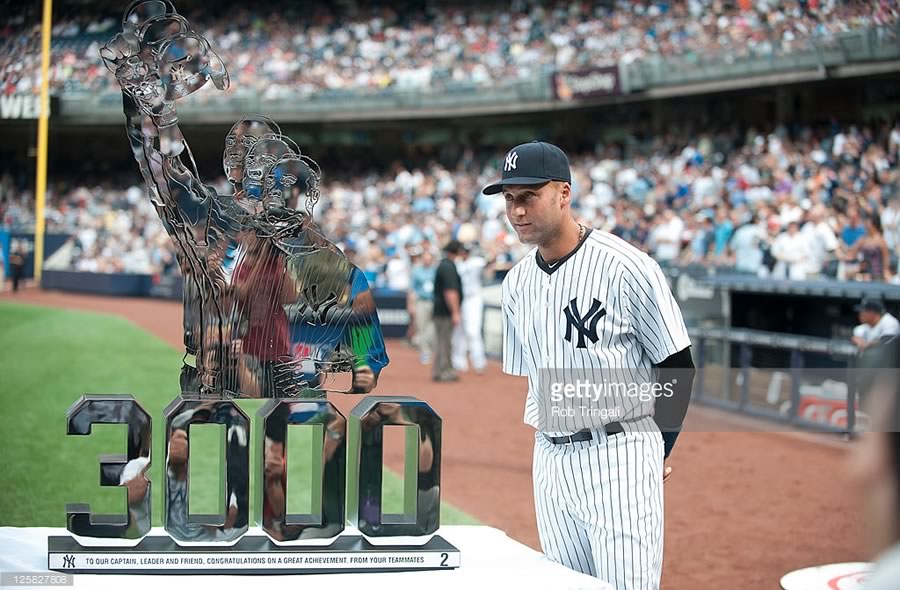 At exactly 2:00 PM today, number 2 Derek Jeter hit his 2nd hit of the game, a home run into the left-center field seats, for his 3,000th career hit (talk about drama!). Derek hit a 3-2 slider from David Price (one of the best pitchers in the league) and became the 28th member of the 3,000 Hit Club, and the only player to get all 3,000 hits as a New York Yankee. Amassing 3,000 hits is one of the greatest achievements in all of baseball. In my opinion, that and 500 home runs are the two milestones that get hitters into the Hall of Fame without question (except for Rafael Palmeiro who has both but probably won’t ever be in).

Now, I never saw Phil Rizzuto, Frankie Crosetti or Tony Kubek play, but Derek is without a doubt the greatest shortstop in Yankees history. You readers don’t need me to tell you this, but I still wanted to find a way to convey just how good and important Jeter has been over the last sixteen season (1995 doesn’t count because he only played 15 games). So here’s what I came up with. Here are the the Yankees shortstops in the decade before The Captain was given the reigns. If this doesn’t prove Jeter’s value, I don’t know what will.

Tony Fernandez signed as a free agent following the 1994 season. His reputation was mainly of being one of the better defensive shortstops in the league, but he could hit too (.285 for his career then). Tony didn’t really do any of what he was known for during that 1995 season. He didn’t even stay healthy, making only 101 starts. In spring training of 1996, Tony hurt his elbow and missed the whole season. While he was gone, Joe Torre stole his number and rookie Derek Jeter stole his job.

In an era when shortstops were mostly known for their gloves and not their bats, Spike Owen was known for neither. His .234 average and .968 fielding percentage were deplorable. He also couldn’t stay healthy, making only 88 starts at short for the Yanks. Again, this was considerably more than anyone else on the team that season, but I feel someone else, like Randy Velarde, could have done the same and not made $2.3 million (that was a lot of money back then).

Andy Stankiewicz was probably my favorite player of the 1992 season (other than Mattingly, of course). Because he was tiny, looked super Italian and was known for his glove, he drew instant comparisons to Phil Rizutto, who was the Yankees broadcaster at the time. The big difference, in my view, was that Stanky couldn’t hit. By early the next season, he was gone and I think only I missed him.

Alvaro Espinosa, or “Espy,” is by far the closest thing to a Jeter that the Yankees had in the immediate pre-Jeter era. He held down the shortstop position for three full seasons before he was released. Unfortunately, he was absolutely awful.  From 1989-1991, Espinoza and his super thick glasses had 7 homers and drove in 94 runs in 419 games. In 1996, Derek Jeter, a 22 year old rookie, had 10 homers and 78 RBI (in less than 419 games). Espy also has the distinction of driving in only twenty runs in a season in which he played over 140 games (1990). What the hell was he using to hit, a tooth pick? He also made 60 errors in that time, so he had that going for him.

Rafael Santana made 147 starts at short for the Yankees in 1988. He goes to show you that the Yankees didn’t quite understand the whole “no bat, all glove” formula for shortstops  in the late 80s and early 90s. If you’re gonna hit .240, you could at least catch and throw the ball well. Raffi made 22 errors in 1988. Needless to say, it was his only season with the team. He never played on the Yankees again (partly because of an injury), and only played seven games in the majors for the rest of his career.

Another shortstop with glasses, Wayne Tolleson came over from the Chicago White Sox in a 1986 trade and immediately became the starting shortstop. Yes, they actually traded for someone this terrible (other terrible players too) and he was apparently way better than whatever turd they already had (sorry Bobby Meachem). In 1987, the Yankees let Tolleson start 108 games at short, mostly because Meachem and company were so awful. Wayne hit .221 that year and lost his starting job. He did manage to hang around with the team until his ultimate release in 1990. As a bonus, Wayne’s son Steve played for the 2010 Oakland A’s and wasn’t all that good either.

Now Do You Get It?

That’s the crap we as Yankees fans had to put up with at shortstop for ten years before our savior came. Ten years of 5’8″ 130 lb sacks of crap who couldn’t hit a beach ball with a paddle if you pitched one to them from thirty feet away. Ten years of glove-less idiots who probably couldn’t catch herpes from Courtney Love, let alone ground balls from major league hitters. With one swing on opening day in 1996 (a HR to left off the Indians), Jeter erased ten years of pain and anguish and began sixteen years of joy and excitement (yes, even the last two years). It has been an absolute pleasure watching him play. He’s been there giving his all nearly every day for the better part of two decades. He’s made some of the most memorable defensive plays in Yankees history, and has gotten some very memorable big hits as well. None will ever top 3,000th though. This was probably the crowning moment of Derek Jeter’s illustrious career… at least until his Hall of Fame induction.

One thought on “Deliver Us From Stankiewicz”