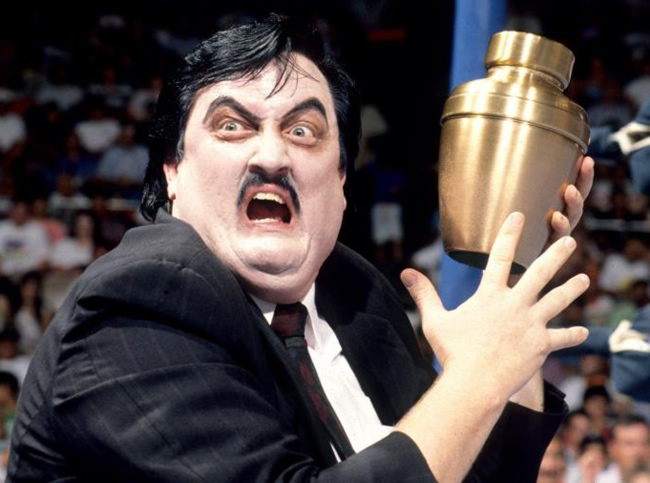 For those of you who don’t know, legendary FCW/WCCW/WWE manager Bill Moody passed away earlier this week. Those of you who looked at the image above know that Moody isn’t best known by his given name. Some of you might know him as Percy Pringle, III (from his WCCW days in Texas), but I’m willing to bet most of you know him like I did… as the great Paul Bearer, manager to one of the greatest professional wrestlers in history, Mark Calaway, AKA The Undertaker. Today, Jobu’s Rum says goodbye to a legend.

As I mentioned earlier, Moody first made his name in the wrestling business as Percival Pringle III, a heel (bad guy) manager in Florida Championship Wrestling and all over the southern independents. He managed such stars as then “Stunning” Steve Austin, and “Ravishing” Rick Rude, I never saw this character because I wasn’t born when he started, and then I was living in Uruguay, where we only really got WWF/WWE programming (and, as my brother tells me, the awful awful Titanes En El Ring). Then, when we moved to the US, it was to the East Coast. Basically, I wasn’t exposed to Moody’s talents until he came to the WWF/WWE in 1990.

From what I’ve read and researched, Moody had cut back on wrestling in the early 80s and gone to school to learn the art of being a mortician. When Vince McMahon needed a new manager to pair with his latest cartoonish villain, The Undertaker, a real life mortician definitely fit the bill. The Undertaker had been previously introduced to the WWE as “The Dead Man,” basically a throwback to the creepy undertakers you would see in old timey westerns and horror movies and such. At first, he was introduced as “The Million Dollar Man” Ted Dibiase’s latest hired goon. He was then managed by Brother Love, a television evangelist character. Clearly these guys didn’t fit in with what ‘Taker was bringing to the table. Moody had also previously worked with Calaway in the southern territories, so it really was a match made in heaven… or hell? Whatever, it worked. Also… a mortician named Paul Bearer? I see what you did there, Vince McMahon…In the words of Bearer himself, Ohhhh Yes!

Undertaker, with Paul Bearer at his side clutching the golden urn that he claimed gave ‘Taker his power and abilities, soon rose through the ranks of the WWE. Today, he really only wrestles once a year at Wrestlemania, which is the WWE’s biggest show of the year. While Calaway was probably talented enough to get himself over (as he has had to work without Bearer for years now), but having a creepy mouthpiece like the overweight embalmer with the ghostly white face and sunken eyes certainly helped. When he talked about “his” Undertaker in that creepy high voice, the people reacted. Not having the Undertaker talk too often added to the mystery of the character too. It was a perfect pairing indeed.

Bearer would also manage such great performers as the Undertaker’s brother Kane (Glenn Jacobs in real life) and Mankind (Legendary wrestler Mick Foley), but I’ll always associate him with the Undertaker. Anyway, I just wanted to pay my respects to a man who entertained me as a youth, and who was well known to be one of the nicest men in a business where nice guys tend to be few and far between. After 20 years of him and ‘Taker saying it to opponents after every promo, we can all finally say this to him. The difference is we actually mean it… Percy Pringle/Paul Bearer/William Moody… Rest in Peace. You’ll be greatly missed.

Paul Bearer, at His Finest: