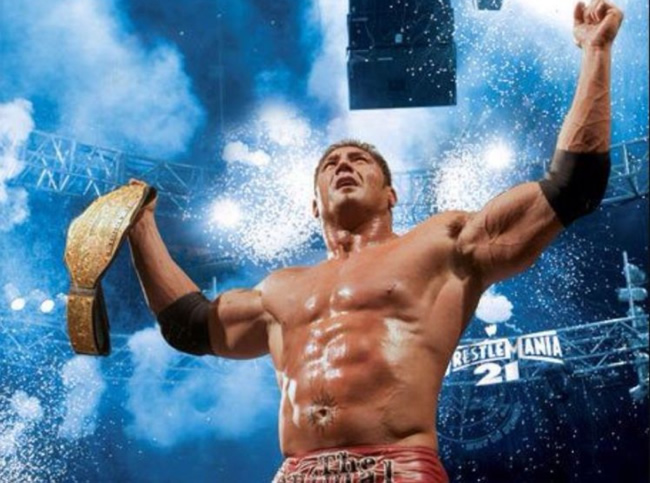 We don’t cover MMA much here, but every once in a while a good story comes along and I am inspired to rant about it. Last week or so, news came out that former WWE wrestler Dave Bautista (aka Dave Batista, aka Deacon Batista, aka Batista, aka The Animal, aka Leviathan), has decided to head enter the professional ranks of MMA. I can’t help but feel that this is a major, major mistake for the big man.

Let’s do this real quick for those of you who don’t know who Dave Bautista is. The D.C. native began his athletic career as a bodybuilder before turning his eye to professional wrestling in the late 1990s, eventually signing with the WWE in 2000. After a couple years in their development territory, OVW (think minor leagues), He was called up to the main roster and began his rise to real fame.

Bautista dominated the WWE (in a scripted kind of way, but it still takes a lot of hard work). His highlights included a Royal Rumble win, four World Heavyweight Championship reigns, two WWE Championship reigns, and four WWE Tag Team Championship runs as well (two with Ric Flair, one with John Cena, one with Rey Mysterio). Needless to say, his accomplishments in fake wrestling were pretty darn impressive. He eventually retired in 2010, citing the company’s direction as his reason for leaving. Because of the fame he gained while in WWE, Bautista has been able to star in a couple of movies and television shows, which has kept him somewhat in the limelight (the straight-to-video kind).

Now, in 2012, at the age of 43, he has decided to turn his attention to the world of MMA, and I am concerned he’s making a grave error. I mean, how many athletes do you know that suddenly change sports at 43 after being glorified actors for the last ten years?

Before I get all negative Nancy on you, he does have some things going for him. There’s no doubt that his size (he’s 6’6″, well over 200lbs) and strength will pose problems for some of his opponents. There’s also no doubt in my mind, due to his burgeoning acting career, that Bautista has kept himself in top physical condition since leaving the WWE. I also don’t doubt his toughness, as he grew up in a poor section of Washington D.C., and was once arrested for beating the pulp out of a couple of patrons at the bar he was bouncing (thanks wiki). All of that being said, there’s a huge difference between the athletic ability it takes to be professional wrestler and that which MMA fighters possess.

I’m sure Bautista has trained very hard, and didn’t just make a decision to get in the octagon with some of the scarier people in the world because he thought it would be fun (he also has a few amateur MMA fights in his career), but come on now. He’s going to be in that cage with guys possibly half his age who have trained their whole lives to become fighting machines. I really don’t see this ending well for Bautista. If he was 25 or 30, I think he could probably be a pretty big force in MMA. At 43, he’s probably just endangering himself.

Although I’m sure he’ll get some easy fights early to try to build his hype and his money-drawing power, at some point he’s going to find himself on the wrong end of a severe ass-whooping. He’s probably either going to get hurt, embarrassed or both, which could hurt his other career pursuits.

I really think that, if he wants some more limelight and fame, he should just go back to the WWE. The fans will welcome him back with open arms, and 43 is not even close to old in the world of professional wrestling (ask Hulk Hogan). He could come back for a year and earn himself a huge paycheck like Brock Lesnar is currently doing (although I haven’t seen Lesnar on television in a couple of months, so I’m not sure what the WWE is actually paying him to do).

If Bautista is just doing this because he needs a new challenge in his life, I wish him well, but he’s probably better off just learning something less dangerous… like cliff diving.