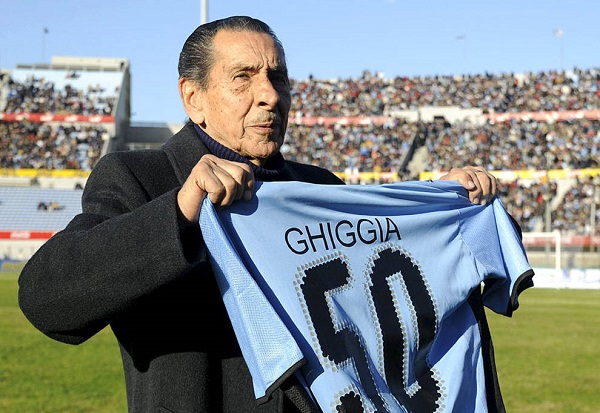 Hello fans! Finally, El Bolso… has come back… to Jobu! Sorry I dropped off the face of the Earth after Nacional soundly defeated their traditional rival to win the Uruguayan League title. I wasn’t on a month-long celebration bender or anything like that; I’ve actually been in the middle of a cross-country move (California love!) which is why I wasn’t around to comment on the Copa America. In fact life is still pretty crazy right now, but when 1950 World Cup hero Alcides Edgardo Ghiggia passed away earlier this week, I just had to put in my two cents.

Ghiggia was born on December 22, 1926 in Montevideo, which made him 88 years old at the time of his passing. He was the last member of a Uruguayan World Cup winning squad left, as well as the oldest living World Cup champion anywhere. He started his club fútbol career playing for Peñarol between 1948 and 1953 (nobody’s perfect) and quickly became a mainstay on La Celeste, then emigrated to Italy to join AC Milan and AS Roma in the 50s and early 60s and even suited up in 5 international games for Italy’s national team. See, back then all you had to do to switch national teams was move to a different country and get someone on their coaching staff to notice you. Anyway, he returned to Uruguay in 1962 to play 5 seasons for Danubio, finally retiring in 1957.

On the field, Ghiggia played on the right wing, using his speed and dribbling ability to make defenders’ lives miserable. He wasn’t big (only 5ft 6in tall), but he made up for it with skill and quickness. He was absolutely loathed by defenders on at least two continents, as well as my beloved Nacional’s fan base and the entire country of Brazil.

Ghiggia is best known, of course, as  the man who scored the game-winning goal in the biggest upset in fútbol history (settle down, US fans, this one is bigger than yours and you know it). The last game of the 1950 World Cup final featured Uruguay and heavily-favored host Brazil playing in front of 200,000 rabid fans at the Maracana stadium. Because the tournament was designed as a series of round robin stages, this was not technically a final, and, in fact, Brazil was one point ahead in the standings and needed only a tie to win the Cup. The consensus opinion was that Brazil would crush the Celestes by several goals; you can read all about that game in an article our own Martin Stezano wrote for History.com, including how a prominent Brazil paper proclaimed the hosts winners the day before the game.

Brazil did manage to go ahead on a goal early in the second half, but Uruguay managed to stay in the game and tied  the game in the 66th minute: Ghiggia ran down the wing, faked a shot on goal, and instead passed it into the box for Juan Alberto Schiaffino, who poked it in. Thirteen minutes later, Ghiggia once again eluded his marker and came down the right side. With Schiaffino once again setting up in the box, the much-maligned Brazilian keeper, Moacir Barbosa, hesitated, and Ghiggia slotted the ball between the goalie and the near post to seal Brazil’s demise. While this is the play everyone remembers, it’s important to note that it was his earlier assist that gave Uruguay hope and planted the seeds for the deciding shot. It’s hard to explain the impact of his performance on the collective psyches of two countries, although Ghiggia himself came closest when he said “only three people managed to silence the Maracanã: Frank Sinatra, the Pope, and me.”

As the years passed and Uruguay’s golden days receded into the past, Ghiggia became a national symbol, to be trotted out for an opinion whenever the Celeste played an important game. Mostly he kept to himself in his humble home in the Montevideo suburb of Las Piedras, but as the years passed and his contemporaries died off, he was increasingly recognized as an important part of fútbol history by FIFA and even Brazil itself, which honored him in a 2009 ceremony (I guess 5 world cup trophies healed that particular wound). Amazingly, Ghiggia passed away on Wednesday, July 16th, exactly 65 years after the Maracanazo. You can’t overstate the man’s sense of timing.

It’s hard to quantify what Ghiggia represented for us Uruguayos. The 1950 World Cup cemented Uruguay’s reputation as the best national team on the planet, so as the Celeste lost relevance on the world stage it became a bittersweet reminder that we weren’t what we once had been, both an event to be celebrated and a weight to be shouldered, especially for the players who have worn the Celeste over the last few decades. Ghiggia, by outliving his former teammates, eventually became the physical representation of that event, as well as a convenient trope for sports journalists to trot out whenever they wanted to play the nostalgia angle (which in Uruguay happens a lot). I don’t want to say that he became a burden, but in a way he did, and in the same way his accomplishments made him into something he didn’t want to be. I’m not going to say that I’m glad he’s gone, but there’s a part of me that is relieved that he can no longer be used in that way.

On his way to the great beyond, Ghiggia had one last joke to play on his team’s biggest rivals: Nacional is playing a friendly today against Argentinian powerhouse Estudiantes de la Plata as part of their preseason preparation. Now you may remember that the Tricolores did not receive the official national championship trophy last month because of Seatback-gate, so the national association (AUF) made plans to hand it over during today’s match. Not so fast, however, because AUF has now formally decreed a day of mourning in Ghiggia’s honor, so the ceremony has been cancelled. Good one, Alcides! Nacional will instead honor the departed hero with a brief ceremony, and will prevent any players from wearing his number 7 jersey during the game. Peñarol is also playing a friendly today, against Las Piedras’ own first division team Juventud, and will do so with every player wearing number  7, which will be awesome to see.

Alcides Edgardo Ghiggia gave Uruguay a World Cup title, and now he’s gone. The last reminder of a bygone era is no more; I guess it’s time to go out and make some more history. And as we try to do so, we should fondly remember the man who taught us how to make 200,000 people fall silent.