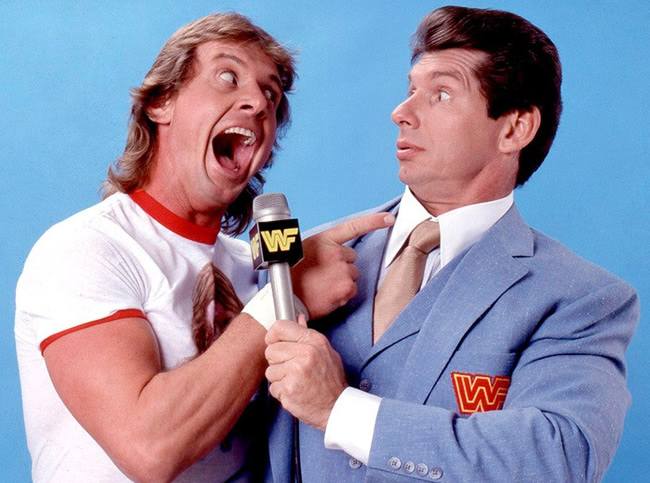 For those of you who haven’t heard, the WWE Universe lost one of its biggest stars over the weekend in WWE Hall of Famer “Rowdy” Roddy Piper. If you’re a wrestling fan, you’ve seen all of the outpouring of emotions all over social media already, so I won’t get heavily into it. The point is that the world lost not only a great professional wrestling star, but also a cultural icon from the 1980s. This is a loss that should be felt beyond the wrestling community too. Let’s quickly remember Roderick Toombs, the man behind the man who always changed the questions just when you thought you had all the answers, but left us way too soon at age 61.

I’ll just pay this tribute by talking about my favorite memories of Piper from inside and outside the ring, starting with inside the ring first. Unfortunately for me, I was not alive, or at least conscious of what professional wrestling was, during Piper’s prime. He got his start in the 1970s during the territorial era, traveling all over the United States (and the world) as one of the most hated villains in the industry. Piper was such a good heel that, when he was finally signed by the expanding WWE in 1983, he quickly became one of the company’s biggest baddies, despite the fact that he didn’t even wrestle. He started as a manager for such bad guys as “Dr. D” David Schultz and “Mr. Wonderful” Paul Orndorff, and was given his own interview segment, named “Piper’s Pit.” It was on that segment that Piper brought his unique promo style to the big stage. Piper would rant and rave, seemingly almost choking on the words as they rushed out of his mouth with a wit and velocity that was unmatched, throwing in a little chuckle with every gasping breath he took between sentences. It was unlike anything anyone had ever seen or heard, and his promos remain untouchable to this day. And, considering that he usually ended up attacking or berating the good guy of the day, it made fans absolutely hate him.

Piper was so good at being bad, that many actually credit him with playing a huge part in the rise of Hulk Hogan and the WWE during the Hulkamania era. He’s also given a great amount of credit for helping the “Rock N’ Wrestling” connection succeed, as it was Piper who famously kicked Cyndi Lauper and broke a gold record over the head of “Captain” Lou Albano (Lauper’s on-screen father in the “Girls Just Want to Have Fun” video) on WWE television in 1984. It was also Piper who faced hogan in the main event at The War to Settle the Score on MTV, and, along with his partner, Orndorff, main evented the first Wrestlemania against Hogan and Mr. T. Wrestling is a heel-driven industry, and it is the bad guy that really makes the good guy, and not the other way around. Many also believe that, without Piper, there might not have been a Hulk Hogan either. People paid money to see Hogan give Piper his comeuppance on more than one occasion. Also, the clip of Piper hitting Jimmy Snuka over the head with a coconut will literally never stop being played on WWE television.

Anyway, I could talk about early 1980s Piper all day, but my favorite in-ring Piper moment came much later in his WWE career, after he had come and gone from the company more than a couple of times. The WWE had a new superstar they wanted to build up in current WWE Hall of Famer Bret “The Hitman” Hart. Again, to make a star, you need a great opponent. This time, however, Piper would be building another star as a good guy, rather than a bad guy. The angle went like this: Hart won the belt at SummerSlam ’91 (as Piper cheered wildly from his seat at the commentary desk), but lost it to the evil Mountie shortly before the 1992 Royal Rumble. Piper won the belt from Mountie (yes, by the way, he came to the ring dressed as a member of the Canadian Royal Mounted Police, and even had a song he sang himself, called “I’m the Mountie.”). After that, Hart wanted to fight Piper for the belt, but the veteran Piper refused to fight Hart, citing his decades-long relationship with the Hart family as the reason he wouldn’t fight Bret. Hart eventually convinced Piper to fight him, and the elder statesman basically vowed to turn himself into the old Roddy Piper in order to win the match.

Despite the fact that it featured two good guys, the match itself was super intense, as enough tension had been built up between the two to make fans think that the evil Piper might just make an appearance at any moment. Also, this is widely considered one of Piper’s best matches. He wasn’t known for his in-ring ability, but I think Hart could make a broomstick look good in the ring, and Piper was no exception. The match was built perfectly, with a good back-and-forth that also featured Hart bleeding profusely to build fan sympathy. Late in the match, the referee got knocked out, and Piper’s morality was truly tested. Desperate to hold on to the only singles title he had ever held in WWE (his only other WWE title run came as tag champs with Ric Flair when the two were well past their primes in 2005), Piper grabbed the ring bell as the ref lay unconscious in the ring. In 1984, Piper would have walloped Hart with the ring bell until the last whisps of life had left the “Hitman’s” body. In 1992, however, looking down at a kid he’d known since Hart had been in little pink and black diapers in Calgary, and with the fans pleading for mercy, Piper couldn’t do it. He put the bell down and went for the sleeper, which was reversed by Hart for the 1-2-3. Piper forever kept his good standing with the crowds, and Hart went on to become one of the biggest stars of the era. It’s considered one of the finest matches in Wrestlemania history, and it’s still my favorite Roddy Piper moment.

I’ll be brief with my favorite out-of-the-ring Roddy Piper moment, not just because I took forever to talk about my favorite in-ring Piper memory, but because it really only needs one quote: “I have come here to kick ass and chew bubblegum… and I’m all out of bubblegum.” If you don’t recognize that quote, you should first be ashamed of yourself, and then go out and Netflix the cult classic John Carpenter film “They Live.” In the movie, aliens have secretly assimilated into human culture and are well on their way to executing a subliminal takeover. Their messages, which are designed to keep humans lazy and unmotivated, as well as their hideous faces, can only be seen when wearing special sunglasses, which someone somehow figured out and invented (don’t worry about it, it makes sense). Somehow, unemployed drifter John Nada (Piper), gets his hands on the glasses and joins the resistance. The movie features great creepy aliens, awesome ass kicking and witty banter from Piper and one of the most iconic fight scenes in movie history. It happens when Nada is trying to convince his friend Frank (palyed by Keith David) to put the glasses on and see what’s really going on. The scene is absolutely brutal to the point of absurdity. It also lasts over six minutes which makes it cycle from awesome to a little uncomfortable and all the way back to awesome again by the end. The best part is that it’s a completely unnecessary scene. One or two punches should have convinced Frank to put the damn glasses on. Instead, the two nearly killed each other over and over again. It’s amazing! It was so memorable, in fact, that it was famously remade shot-for-shot in the 2001 episode of South Park named “Cripple Fight,” proving yet again that Trey Parker and Matt Stone are two of the most talented and clever people ever born. If you haven’t seen it, see it below, and for God’s sake, go watch the movie!

OK. That’s going to do it for me. I didn’t mean to go on this long, but once I got started talking about the great Roddy Piper, it was hard to stop. Rest in peace, Rowdy one. We’ll never forget you, and we miss you already.