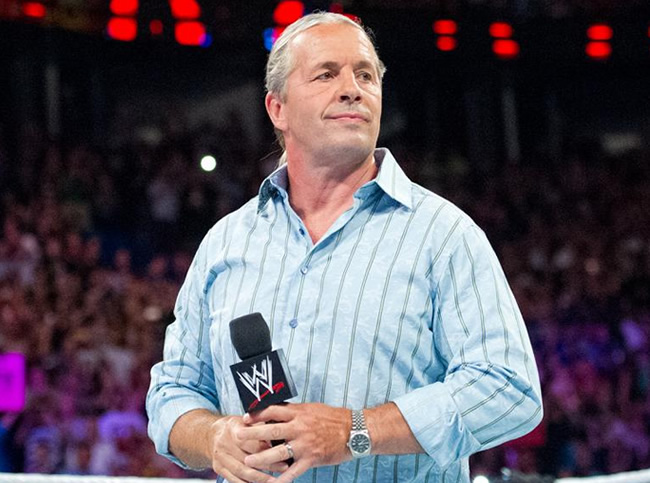 When I was a kid, Bret Hart was at the top of the then World Wrestling Federation, and I was as big a mark for the Pink & Black Attack as the next little fan. He called himself “the best there is, the best there was, and the best there ever will be,” and he was right. Nowadays, I just kind of want him to go away forever, because he’s the worst.

Over the past few months, Hart has gone from one of my favorite performers to one of my least favorite withered old wrestlers. I know he just finished beating prostate cancer, and I am happy for him, but that doesn’t mean I can’t criticize him for being an asshole. It’s like he turned heel, but in real life. Need some examples? Here you go:

“I think they have done an awful job of trying to get Roman Reigns over for WrestleMania and quite honestly they made their biggest mistake at this year’s Royal Rumble. They had the right idea by putting him in from the start and stacking the odds against him, but they should have had him overcome all the obstacles by fighting bravely against all comers to eventually be the last man standing. But this whole idea where a whole bunch of Triple H’s goons come out, attack him and leave him for dead, having him stretchered out almost crippled only for him to limp out at the end to make a comeback, well we’ve been there, done that.” – Wrestling Inc

And now Hart’s take on The Rock’s return during Wrestlemania 32:

“I’m always happy to be proven wrong, but I’ve never seen any real genius come from Triple H yet. I sound like I’m always knocking him, but it seems like he’s quick to push the great wrestling to the side and push the bodies, guys who have [good] physiques, all the time. They wonder why CM Punk quit and they wonder why Daniel Bryan got hurt. It’s because they squeeze so much out of those guys.” – 411 Mania

Now his less-than-excited thoughts on his WWE Payback appearance a couple of months ago (at which he looked super board at ringside:

And now, the kicker… Hart on former (and probably future) WWE champion Seth Rollins, who recently returned from injury:

“The other thing is, when you’re the champion, you have a responsibility to not get hurt. You have to be spot on. I love that Rollins kept going on and finished the match, and that shows a lot of courage. Nobody can hurt you and you can’t hurt yourself. It’s not allowed. I was champion, off and on, for quite a few years, and I never missed one title match from an injury. I got hurt lots of times, but the reality is you’ve got so much pinned on you and so much tied onto you, the company and your peers can’t afford for you to get hurt. When you do get injured, it throws a wrench into everything.” – Sports Illustrated

Is Hart right or wrong in any of his criticisms? I suppose that depends on what you believe, and what your thoughts about the product are. You might think he’s right. You might think he’s wrong. I just think he’s a crazy old coot, especially when it comes to what he said about Rollins, who has gone on record to say that he’s hurt by Hart’s words. Also, if he hates the business so much, he should just stop watching it… or maybe stop taking paychecks for WWE appearances. Could he be any more bitter?

How about he starts his own company and does things his way? Let’s see how many tickets he sells… Go away Bret Hart. I’ve had enough of you.