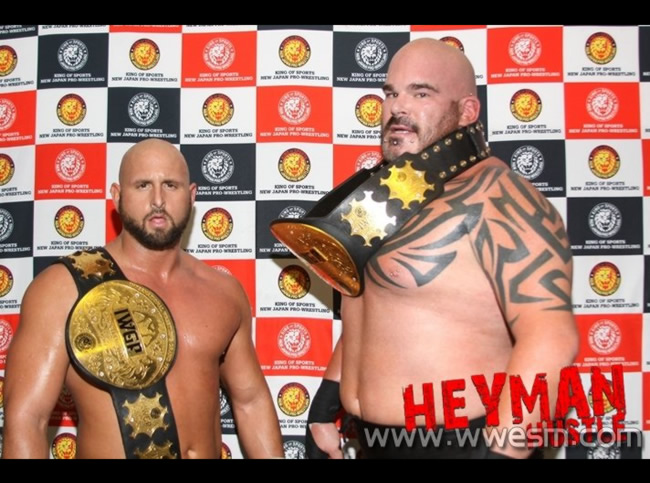 If you’ve been reading the rumor mills lately, you know that the WWE has signed four new big talents from New Japan Pro Wrestling (official contracts are not yet signed, but it’s happening). Sometime in the first quarter of this year, we’re going to see Shinsuke Nakamura, A.J. Styles, Doc Gallows and Karl Anderson all debut on WWE television in one way or another. The latter three names on that list are–or were until recently–members of NJPW’s hottest stable, The Bullet Club. For today’s post, we’re going to focus on Karl Anderson, and his NJPW beginnings, which involved another dominant tag team named Bad Intentions, with his partner Giant Bernard (aka Albert, aka Tensai). Let’s break it down!

Let’s first start with Bernard–the muscle behind Bad Intentions. If you’ve been a fan of the WWE for as long as I have, you’ll recognize this man immediately. WWE fans first met Matthew Jason Bloom in 1999, when he debuted as Prince Albert, the pierced up personal tattooist of Droz. Get it? Prince Albert? Ah, the Attitude Era at it’s finest! Anyway, the two tagged together until Droz was paralized in an in-ring accident in October of that year. Albert went on to tag with several partners throughout the remainder of his first WWE tenure, also eventually winning the Intercontinental Championship in 2001. The rest of his initial WWE run was nothing to write home about, and he was eventually released in 2004. He headed to Japan to wrestle for All Japan Pro Wrestling until 2006, and then signed with rival New Japan.

Big men tend to get over more easily in Japan, where the style of performance is a little more old school, so Bloom immediately did very well for himself with his new character, Giant Bernard. He had some fun challenging Brock Lesnar and others for the IWGP Heavyweight Championship, but spent the bulk of his time in the tag team mix with multiple partners. He even won the IWGP tag belts with Travis Tomko. He would soon make a new friend.

If you’re the type of fan that only watches WWE, then you’re probably not at all familiar with Anderson. Over the last couple of years, I’ve made a concentrated effort to watch more Japanese and American independent wrestling, and so I’m a bit more familiar with the man known as “Machine Gun.” The North Carolina native (real name Chad Allegra), kicked around independent promotions, like Pro Wrestling Guerila, the NWA and early incarnations of Ring of Honor until he was noticed and signed to NJPW in 2008. After a solid debut with the company, he joined New Japan’s number one heel stable Great Bash Heel, and his career began to take off. That wasn’t good enough, and Anderson, and his new tag team partner, Giant Bernard, eventually switched allegiances to another top heel group, Chaos.

It was with Chaos that the two finally got their first shot at the IWGP Tag Team Titles in June of 2009. Unfortunately, they lost to Team 3D (yep, the Dudleyz), who were visiting from TNA. They soon won the 2009 G1 Tag League by defeating Apollo 55 (future buddy Prince Devitt aka Finn Balor was on that team). In Japan, tournaments are much more commonplace than in the United States, and are considered very prestigious honors. They are often used to elevate new tag teams to prominance. Bernard and Anderson, now known officially as Bad Intentions, used this win to catapult themselves back into the tag title picture.

Nearly a year to the day of winning the G1 Tag League, they finally won their first IWGP Tag Team Championship in a three-way elimination match at Dominion 6.19. From that time on, the two defended their belts all over the world, and against challengers from Japan, Mexico and the United States alike. They even took on members of NOAH (a fledgling promotion in Japan), winning their tag team championships in the process too. So epic was their reign as the IWGP champs, that they broke records for most title defenses (10) and longest championship reign (564 days). Two years can be an eternity in the world of professional wrestling, so this is most impressive. The two eventually lost the titles to a team named Tencozy at Wrestle Kingdom VI in January of 2012.

Before the end of the year, Bernard would leave for WWE, returning as Lord Tensai to challenge John Cena at the top of the WWE card. Partially because WWE basically ignored the fact that Bloom had been Albert less than ten years earlier, the character was a complete flop. Eventually, Tensai became Sweet T, and formed a dancing fat guy tag team with another giant flop, Brodus Clay. Bloom eventually retired, and was hired as a trainer for NXT. He has since been promoted to head trainer. Not bad for a guy originally named after a dick piercing.

Anderson, meanwhile, soon hooked up with former foe Prince Devitt, as well as Gallows and several other foreign wrestlers in NJPW to form probably the hottest heel faction in the last 20 years. As part of that faction, he has teamed with Gallows all over the world, gaining major exposure in the United States through NJPW’s working agreement with Ring of Honor. Now, he’s getting ready to come to WWE for the first time. I look forward to seeing what he does. If it’s anything like what he’s done in Japan, WWE fans are in for a treat.