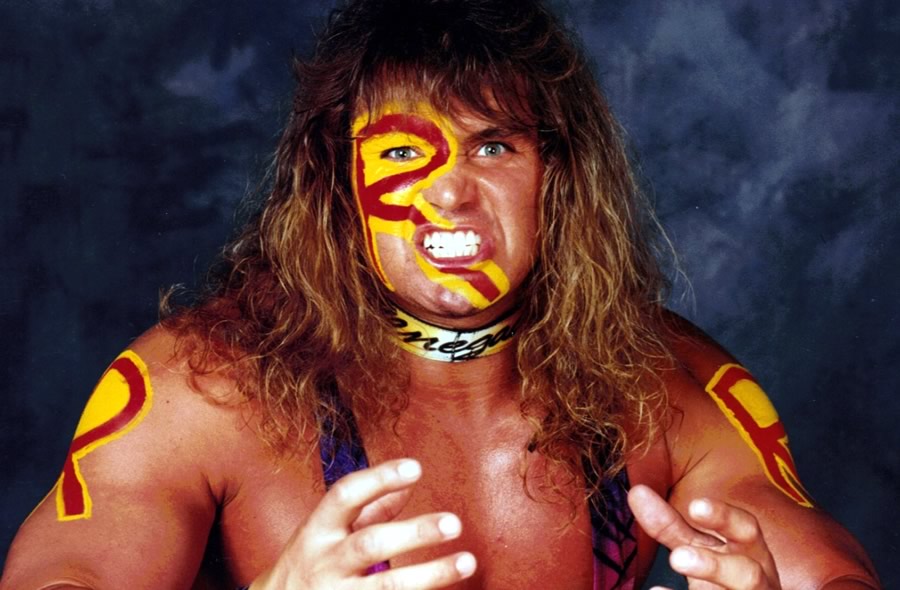 [dropcap]S[/dropcap]ometimes good performers get stuck with horrible gimmicks, and they fail. Sometimes a good gimmick is given to a bad performer, and that fails. If a good gimmick is given to a decent performer, can it still fail? It is if the gimmick has already been made famous all over the world by a different guy, and the company teases the debut of the new performer as the arrival of the guy who made the original gimmick famous! Let’s all welcome Renegade, aka the fake Ultimate Warrior, into the Bad Gimmick Hall of Fame!

Before he was the Renegade, Rick Wilson was just another wrestler looking to get his big break. The Marietta, Georgia native trained under legendary WWE Hall of Famer Killer Kowalski, who has also trained Triple H, Perry Saturn, Big John Studd, Chris Nowisnki, Damien Mizdow, just to name a few. After making his debut in 1990 for South Atlantic Pro Wrestling, he wrestled around the independents as Rio, Lord of the Jungle, before getting picked up by WCW in 1995. His “big break,” however, was not all that it was cracked up to be.

Let’s set the scene a little first. Starting in 1994, Ted Turner started signing just about every big WWF talent he could get his hands on. Guys like Hulk Hogan, Randy “Macho Man” Savage, Earthquake (known as Avalanche and the Shark in WCW), Brutus Beefcake (known as Brother Bruti, the Butcher, the Man with No Name, the Zodiac, the Booty Man and eventually the Disciple in WCW), Jimmy Hart and The Big Boss Man (known as The Boss, the Guardian Angel, Big Bubba Rogers and finally Ray Traylor in WCW) all found themselves moving from New York to Atlanta for bigger pay days and less working dates, all so Turner could put Vince McMahon out of business.

In the weeks leading up to WCW Uncensored, in March of 1995, when the Hulkster started promoting the “ultimate surprise” he had for Big Van Vader, Ric Flair (woooooooo!) and Arn Anderson (whom he’d been feuding with and constantly getting beat up by), people excitedly assumed that WCW had signed another former WWF superstar, the Ultimate Warrior. WCW didn’t exactly shy away from this theory. Hogan continued plugging his ultimate surprise in the coming weeks, even showing the silhouette of his surprise, who had long teased hair, big muscles and tassels wrapped around his biceps. WCW was careful not to show the new guy’s face, which further fueled the flames. Leading into the PPV, they revealed the surprise’s name to be The Renegade, but still, it was obvious that they were basically pretending that the Ultimate Warrior was coming to Uncensored as “the man that’s gonna bring Hulkamania into the 21st Century.”a

At Uncensored (one of the shittiest PPVs I’ve ever seen, btw), Hogan had a Four Corners Strap Match against Vader, and right at the beginning of the match, it became clear that Vader, Flair and Anderson were going to play the numbers game to gain an advantage. Suddenly, some hard rock music hit, and out sprinted a long teased-haired, muscular man wearing face paint, singlet type tights and tassels around his arms. He ran around the ring, all the while banging his head, shaking the ropes and making the press slam motion with his arms. Holy crap! They did it! They brought in the Ultimate Warrior! They called him the Renegade because of copyright infringement with WWF, I’m sure, but that’s him! That’s what fans were thinking, at least the stupid ones who weren’t fully familiar with WWF programming, or anything north of the Mason Dixon.

Unfortunately, it couldn’t have been more apparent that this man wasn’t the man WCW wanted you to think he was. First of all, the music was like hard rock if my grandmother had chosen hard rock. There was something special about the Warrior’s music. It really got the crowd pumping. I know WCW couldn’t use the same music, but it was clear that they didn’t really know hard rock. Secondly, the guy that came out was like 5’11”, and like 230 tops. He was muscular, but he was not 6’2″, and he did not have 270 lbs of muscle on his frame like the Ultimate Warrior did back in his heyday. The intensity he showed in the ring also paled in comparison to the intensity that exploded from the Warrior’s pores when he came to the ring. It was clear that if fans knew who the Ultimate Warrior really was, they should have shit all over this guy immediately. It was a total joke. They even billed him as being from “Parts Unknown.” Are you serious, bro? At least when Vince McMahon ripped off the Road Warriors by bringing in the Powers of Pain and Demolition, nobody pretended they weren’t a ripoff, or that they were the actual Road Warriors.

Over the next eight or nine months, WCW actually gave the Renegade a sizable push. They paired him with Jimmy Hart as his mouthpiece, and often teamed him with Hogan and Macho to take on the baddest baddies the company had to offer, mostly in the form of Vader, Flair, Anderson and their crew. All of this was terrible (remember the Dos Amigos match?), but the fans seemingly ate it up. I don’t know if people truly thought that this man was, indeed, the same man who portrayed the Ultimate Warrior, or if they were just cheering for him because he was intense and hung with two of the biggest stars in the company’s history, but they really seemed to like this guy. It was absurd. They even gave him the WCW Television title! The third biggest title in the company! Granted, he only held the title for a couple of months and he seems to have moved down the card with every passing pay per view event, but for a while, he was a big part of the company’s plans.

At some point, Vince McMahon got wind of what WCW was doing and filed a lawsuit for character infringement. Soon after that, on the November 6th, 1995 WCW Nitro, The Renegade lost his belt to Kevin Sullivan, and Jimmy Hart turned on him, splashing him in the face with water and telling him that he was no longer Renegade, and he was just plain Rick. Ouch, Jimmy… Ouch. That pretty much ended Rick Wilson’s relevance in the world of professional wrestling. He returned to Nitro in February–still using the Renegade name, but without the face paint or the tassels–and eventually started tagging with some guy named Joe Gomez. Needless to say, this didn’t exactly pop the crowd. Also, by March of 1996, the real Ultimate Warrior returned to the WWF, which pretty much took away the last drops of credibility Renegade had left. The character stuck around WCW as a jobber for a couple of years, but never really saw much PPV or even Nitro action, relegated mostly to WCW Saturday Night and other lower tier shows. Ironically, WCW eventually brought the real Warrior in for a disastrous run against Hogan in 1998, during which they used Wilson as his stunt double. Unfortunately, Wilson himself was released by the company in December of 1998.

Sadly, this story ends tragically for Rick Wilson, as he committed suicide just a few months after his release. He ended up as just another wrestling tragedy, which is a real shame for a guy who entertained a lot of crowds during the peek of his WCW run. All that aside, we induct the gimmick, and not the man. I hope Rick Wilson is resting in peace somewhere, but The Renegade rests in the BGHOF.

Check out this match between Renegade and a very (very) young, Terry Richards aka Rhino:

2 thoughts on “Bad Gimmick Hall of Fame: The Renegade”