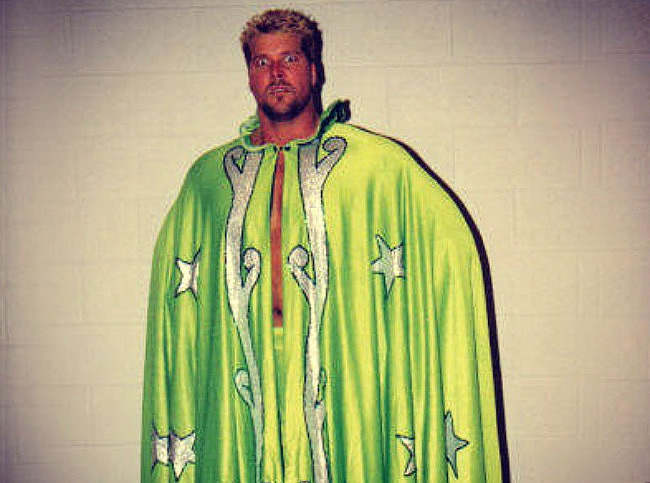 When a young wrestler is fighting hard to get his big break, he is often forced to take on a bad gimmick because it’s the first chance he gets to grab the brass ring. Kevin Nash, for example, once wrestled as Master Blaster Steele, one half of the Master Blasters tag team. He also wrestled as Vinnie Vegas, a wise-cracking wise guy (like the mob), and as Diesel, a man named after a type of gasoline. None of these were his worst gimmick, and I can say that confidently. Let’s welcome today’s Bad Gimmick Hall of Fame inductee, Oz!

Right about now, you all are probably saying to yourselves; “Oz? The gritty HBO show about prison life? That might make a cool gimmick!” A, no it wouldn’t. Remember when we inducted Nailz into the BGHOF? B, that’s not the right Oz. Yep. WCW created a gimmick based on Frank L. Baum’s Wizard of Oz. In fact, the gimmick Nash was tasked with getting over was one based on the actual Wizard of Oz. Pay no attention to the man behind the curtain? You should pay attention, because he sucked. But first, let’s do a quick catchup of Kevin’s early career.

Kevin Scott Nash was born on July 9, 1959 in Detroit, Michigan. These days, he’s a legend of the sports entertainment industry, but he didn’t always dream of being a professional wrestler. A young Kevin Nash once dreamed of playing professional basketball. You probably would too, if you were seven feet tall and agile to boot. Nash made it pretty far, playing three seasons at Tennessee (they made the NCAA Tournament a couple of times during his career), and even spending a brief amount of time playing professionally in Europe. Unfortunately, a torn ACL ended that in 1981.

As they say, when one door closes, another one opens. Nash got to know some wrestlers around the Atlanta area, which got him his foot in the door at a local wrestling school. He was eventually signed to WCW, where he debuted as Master Blaster Steele, which was one of about a thousand gimmicks based on the Mad Max movies back in those days (remember Lord Humongous? How about the Road Warriors? Demolition? Powers of Pain?). Anyway, Nash was eventually just renamed The Master Blaster, when WCW parted ways with his tag team partner (Master Blaster Blade, aka Al Green) but the gimmick never got over, and so he needed something new. But what could it be?

Well, if you know something about 1991, it’s that the Wizard of Oz made a huge cultural comeback. New books and movies came out, and the brand’s popularity skyrocketed. Is any of that true? Absolutely not. The heads of WCW just decided they wanted a new character, and they were going to base it on the Wizard of Oz. Unfortunately, I don’t think anyone in the office had ever actually seen the movie, because they came up with the dumbest idea of all time. Does everyone remember what the original wizard of Oz looked like? As you can see from the link, the wizard almost looked like today’s typical caricature of an alien might look like, or kind of like the martians in Mars Attacks. You know what Kevin Nash looked like?? Well, I’ll let his words tell the story. Here’s an excerpt from his first appearance on the Steve Austin Show podcast:

“Didn’t see the outfit or nothing until the day of. And they handed me this fucking deal, and it’s just like ‘holy fuck, like another rib.’ I’m in a lime green outfit with a cape that weighs 200 fucking pounds, and I’m not only wearing a dunce cap, but I’m wearing a dunce cap with a rubber mask and I’m gonna pull and old man’s face off and be me underneath it. like… I think… maybe Mantaur might have been the only thing that was any worse than that. I mean fuck. I’m looking at that motherfucking outfit going… you know back then, you know how it was, man. they wanted everybody to quit.”

I couldn’t have said it better myself. I mean seriously. Even his Clash of the Champions presentation was lame. First of all, they used a giant backdrop depicting the outside of a medieval castle gate on the stage. Let me ask you this. Did the Wizard of Oz live in a medieval castle? No. He lived in a crazy, futuristic castle that looked like it was made of real emeralds. Not a shitty brick castle. Don’t worry though, they bathed the entire stage in green lights, because, you know… the Land of Oz was green. Remember? Also, the music starts out cool and ominous, but quickly turns into an early 90s fake rock theme typical of WCW at the time, because that’s the kind of music they had on Oz, remember?

The one actual cool part is when Oz finally appears out of the castle door opening with his back to the camera. Being seven feet tall, Nash naturally casts an imposing figure. When you stick a giant cape on him, a mask and hat that make him even taller and some cool smoke around his feet, it’s kind of a cool visual. Unfortunately, it’s all ruined when he turns around, revealing the ridiculous rubber old man mask. The thing looks like a cheap halloween costume, and the wizard hat is even more ridiculous. Furthermore, the lime green cape has silver stars all over it. If all that wasn’t enough, Nash is accompanied by a much smaller person, who appears to be wearing the same mask, named Great Wizard (played by the great Kevin Sullivan). Now, I ask you; even if it didn’t all look terrible, why would the regular Wizard of Oz be managed by the Great Wizard? Wouldn’t it be the other way around? Also, is anyone else made a little uncomfortable by the proximity of the manager’s name to that of the head of the ku klux klan? I know WCW is in Atlanta, but nobody thought of this? Well, I guess I hope nobody thought of it. If they did, and still did the gimmick, that’s a whole other can of worms to open.

Anyway, when Oz gets to the ring, he removes the mask/hat and the cape to reveal lime green tights with a silver moon and lightning bolts on it… You know, like the Wizard of Oz had on his curtains and outfit… Oh wait, he was a floating head. He had no outfit. And once revealed behind the curtain, he was just wearing a regular three-piece suit. So where did this godforsaken outfit come from, then? Seriously… let me ask this again: had anyone of the decision makers at WCW seen the movie? Poor Nash was dressed more like one of the little guys guarding the castle gate than the imposing wizard. Furthermore, Nash’s face bore a wide-eyed angry expression when he removed his mask and cape. I can’t tell if they were going for the “this guy is a dangerous psycho” look, or if Nash had actually been driven insane by his anger about the entire gimmick on his way to the ring. Did I mention they spray painted his hair silver? You know, just like the Wizard of Oz! Wait… the hologram was bald. Were they trying to make him look like the old man behind the curtain then? Who the hell knows? Want to see some more? Here you go!

You can see from the videos above that Nash had that big-time heel potential. He’s big, powerful and even shows some good heel psychology, like when he picked up Johnny Rich before the ref counted to three in the Clash of the Champions match, which enabled him to dole out some more punishment before finally finishing the match off with his finisher, spinning sort of Razor’s Edge type power bomb. As an aside, it’s too bad he never got over. I would love to have heard the finisher’s name. The Yellow Brick Road? The Ruby Slippers? The Emerald City? The Flying Monkey??

Unfortunately, he never got over, so we never found out. Even from this ridiculousness, it’s fairly obvious that, even then, Nash had the potential to be a top-notch professional wrestler. Given a good gimmick, he could have been a huge star in WCW in 1991, and not five years later when he came back as one half of The Outsiders. His next gimmick was the Vinnie Vegas monicker, which saw him paired up with the Diamond Studd (aka Razor Ramon and his Outsiders buddy Scott Hall), Scotty Flamingo (aka Johnny Polo, aka Raven) and Diamond Dallas Page as part of the Diamond Mine stable. I remember thinking this was a pretty cool triad, with some decent gimmicks (basically, just connected douche bag heels), but it didn’t really get over either.

It wasn’t until Nash left WCW in 1993 for the greener pastures of WWF that he became a superstar, using the gimmick of Diesel: a big ass dude named after a type of gasoline for trucks and Mercedes. As Diesel, he soon became World Wrestling Federation Champion. Eventually, he left WWF to comeback to WCW, where he was allowed to just be Kevin Nash, and his star went through the stratosphere and turned the wrestling world on it’s ear. No matter how big a star he became in the wrestling business, how many great movies he starred in or how beloved he still is by his fans, Oz serves as a reminder that we all have to start at the bottom. We all have some skeletons in our closets, or at least behind our curtains.

I’m sorry, “Big Sexy” Kevin Nash, but even you can’t escape this honor. Welcome to the Bad Gimmick Hall of Fame, Oz!