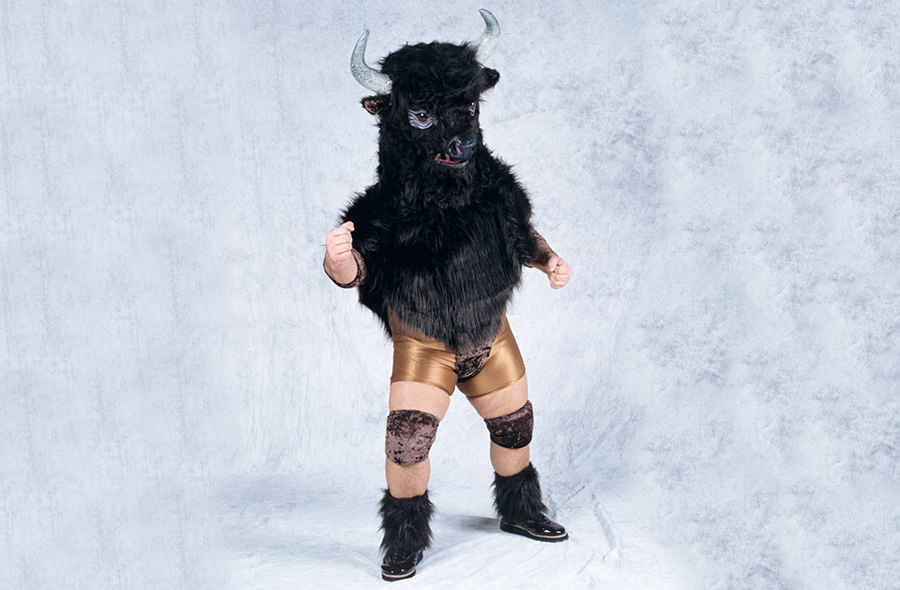 According to greek mythology, a minotaur was a creature with the head of a bull on a man’s body. In the story, the Minotaur came to be because of one man’s greed: Minos, the king of Crete, prayed to Poseidon to send him a white bull. He was supposed to kill it to honor Poseidon, but instead, Minos sacrificed his own bull and kept the white one. As punishment, Poseidon made Minos’ wife fall in love with the white bull. She banged it, and out popped the minotaur, a creature so vicious and hungry for man flesh that a labyrinth was eventually built to imprison it. Guess what… he got out. And Vince McMahon scooped him up. This week’s inductee to the Bad Gimmick Hall of Fame is Mantaur!

I think the photo above says it all, so let’s quickly get to know Mike Halac; the man behind this ridiculous, ridiculous gimmick. Halac, a native of Omaha, Nebraska who was billed at 6’1″ and 401 lbs, was noticed by the WWF after spending a few years wrestling as Bruiser Mastino in Germany’s Catch Wrestling Association (not to be confused with Glenn Jacobs’ WCW version of Bruiser Mastino… weird, right?). While at CWA, he had some moderate success, wrestling for the heavyweight title in his debut and even winning the 1992 Catch Cup (some kind of fancy German tournament). As a side note, he is also the real life cousin of Paul Neu aka P.N. News, who also wrestled under a god awful gimmick.

Anyway, when he was signed by Vince, the WWF spent thousands of dollars to dress him up like a reject from Eureka’s Castle. I know the suit looks like someone’s well-meaning but cheap grandmother assured them they could make a minotaur costume that was just as good as the ones you can buy in stores, but apparently it cost Vince a hoof and a horn (see what I did there?). Once the Halac removed the head (he did so to wrestle, which I guess makes it less ridiculous), he still looked absurd, because he had what were (I am guessing) painted on horns that started around his eyes and traveled up his forehead and all the way to the back of his bald head (you can see them in the photo above). You know, like horns go on bulls. Did I mention the leotards yet? Does anything say mythical bad ass quite like a brown two-toned leotard? How about one with argyle fur? How about one with a cartoon cow on it?? Also, Vince must have made Halac study minotaurs for hours on end, because he had the mythical beast’s mannerisms down to a T, what with the charging, stamping and especially that moo sound he made when he hit big moves on his opponents. I can’t imagine that wasn’t 100% accurate. If I wasn’t about 75% sure that the technology didn’t exist, I’d say Vince went back in time to an alternate universe and studied the actual minotaur from Crete.

That brings me to the one thing I really liked about the character detail was that Mantaur was billed as being from the Isle of Crete. I mean I know the rest of the character is completely unbelievable, but when you add that little detail, it all comes together. OK Vince, I know there’s no such thing as a half man, half bull, and he looks like shit and such, but damn if you didn’t get me with that historical accuracy, though. Did Vince and Pat Patterson literally go on a weekend IcoPro snorting bender directly before coming up with this idea? Can you imagine if you were Mike Halac, and you finally get your big break, and this was the fucking character they handed you? I’m sure Mike went along with it because this was his big break, but good god… just go to WCW or something.

Look. I can kind of see where Vince was going with this misguided plan. Everyone loves to hate the foreign heel, especially when he’s from some jungle or uninhabited island and can barely be controlled. I know I have fond memories of wrestlers like Kamala: The Ugandan Giant, The Wild Samoans and Giant Gonzalez. Its fun to watch those guys run around like savage beasts that can somehow only be controlled by “handlers,” like Kim Chee or Harvey Wippleman. Now, imagine if the savage beast wasn’t just an uneducated and uncultured island person. What if it was an actual mythological creature come to life? You think a real minotaur would be able to handle 1995 American society? Do you think he’d be comfortable suddenly being thrust into a world with the Oklahoma City Bombing, the O.J. Simpson trial, Starter jackets and the movie Showgirls?? I think that mythical monster would just go ape shit and kill everyone, starting with a methodical diet of jobbers and building up to more established wrestlers as he got his confidence. That’s textbook mythical rampaging right there. OK, so it’s still a terrible idea… but in the cartoon age of 1995 WWF, and the coked out mind of Vince McMahon, I guess this character made a lot of sense.

Anyway, you might not believe me when I tell you this, but this character did not get over with the fans. Halac debuted on Superstars of Wrestling in January of 1995, and fell immediately flat. They tried to rescue the character by putting him with legendary loudmouthed manager Jim Cornette (if anyone could handle a man-beast, it was Jim), but somehow, the fans didn’t come around. One might blame Jeff Jarrett for that though. Mantaur nearly defeated Razor Ramon for the Intercontinental Championship, but that damn Jarrett interfered because he was feuding with Razor at the time, and I guess he was way too scared of the Minotaur to let him get the title. Halac managed two Pay Per View appearances as Mantaur, so at least he got a couple of decent pay days. He lasted ten minutes in the 1995 Royal Rumble and was a lumberjack at In Your House 2 in his final WWF appearance. That was it for the Mantaur, who would never be seen again on WWF television

As for Mike Halac, he went on to wrestle in ECW as his original Bruiser Mastino character, even making an appearance at December to Dismember in 1995 (in December… duh). He also wrestled in CWA as Terminator Mastino in 1996. Believe it or not, he returned to the WWF as Goldust’s bodyguard at In Your House 7, when Goldy took on none other than the Ultimate Warrior. He even got to attack Warrior, who quickly body slammed him to death. He was also briefly in the Truth Commission as Tank, but hasn’t been in the WWF or WWE since 1997.

As another side note, you’ll probably be shocked to learn that Mantaur was not the only Minotaur character in 1990s professional wrestling. In 1991, WCW debuted a character actually named The Minotaur. This creature was introduced and managed by Paul E. Dangerously. Believe it or not, I’m going to actually say that this character, which was portrayed by 6’1″, 310 lb muscle man Steve DiSalvo was crap compared to Mantaur. First of all, he didn’t have horns. He didn’t have fur. He literally had nothing to do with a minotaur. He wore a plain leotard and a leather glove that went all the way up his arm and was strapped around his chest. All he did was yell and look at the camera with his colored contact lenses. That’s a minotaur? For shame, WCW. For shame. I’m assuming Pizza Man Jim Herd had something to do with this. I have to give a big shout out to the guys over at the Old School Wrestling Podcast for cluing me in to this guy, as they talked about him on their last show, “#147 – WCW Pro Wrestling Chicago, January 12, 1991.” I’m seeing double here! Four minotaurs! Anyway, you can watch that shitty character’s debut here.