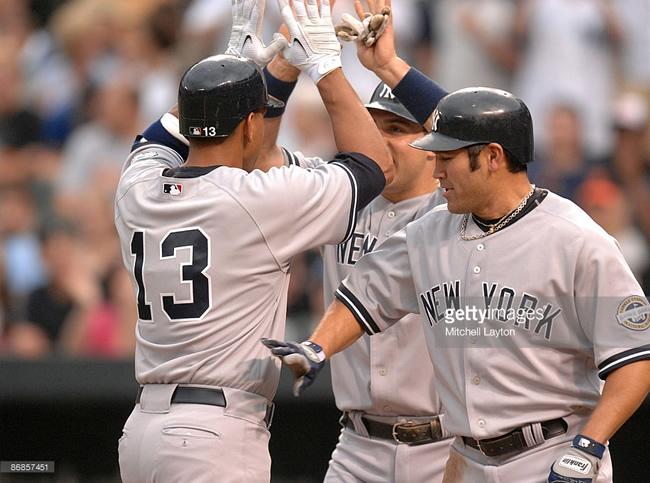 We’ve covered this quite a bit in this AROD’s Most Memorable series, but 2009 was a bit of a tumultuous year for Alex Rodriguez. From injury to PEDs to a World Series title, the season had it all for the Yankees third baseman. In the midst of all that, Alex managed to put up another most memorable moment on the very first pitch he saw on the season.

First of all, let me touch briefly upon the PED stuff. While Alex was out rehabbing the torn labrum that cost him the last month of 2008, and trying to get ready in time for spring training, news was leaked that he had tested positive for PEDs in 2003. Now, that test happened before any kind testing policy was in place, and testing was done just to survey the league to see just how many players were using, but the media got wind of the story and it took off.

Although Alex hadn’t done anything against the rules of baseball at the time, people took it upon themselves to elect him villain of the century–it never really took much when it came to Alex–and he was forced to hold a press conference to come clean about what he’d done. Sure, we found out years later that Alex had lied during that tearful press conference, but the shit storm that came down on him during that time was pretty unfair. After all, nothing he did was against the rules at the time, he was one of over 100 other major leaguers to test positive, and everyone knows Bud Selig looked the other way on PEDs in the early-to-mid 1990s because baseball was in a recession and he needed big strong guys to sock dingers and get the crowds back into the stadiums. Did I mention Bud Selig is the worst? Did I also mention that David Ortiz was on that very same list of failed tests, and I think the media covered it for like 35 seconds? Did I?? Don’t get me started on the 2013 Bud Selig witch hunt either! I will burn this article down to the ground!! Hang on, is the room spinning? I’m seeing spots…

OK, my rant is over. I have my hot tea and I’m wrapped in a blanket and ready to get back to the story. The paramedics were very nice.

Anyway, because of the injury, Alex missed the first month of the season. He began his rehab assignment in late April and early May, and we soon found out that he’d be making his 2009 debut against the Orioles, in Candem Yards, on May 8.

I’m not gonna lie to you, having Alex back was a huge relief. The Yankees had pieced together third base with guys like Cody Ransom and Ramiro Peña, and the team had struggled to a 13-15 start. They had also lost their last five games. Having Alex’s big bat back in the order–assuming he was healthy–felt good. I think that is kind of a microcosm of what it was like to have Alex on this team. At times, you hated all of the negative attention he brought to the team, but man it was nice having his presence in the lineup, wasn’t it?

I remember the optimistic buzz around the New York sports scene on the day Alex came back. The Yankees needed a big win, and they had their newly acquired ace, CC Sabathia, on the mound and one of their big bats was back in the mix.

For their part, the Orioles sent Jeremy Guthrie to the hill to try to extend the Yankees’ losing streak to six games. From the beginning, it was obvious that this wasn’t going to be Guthrie’s day. Hell, it wasn’t even going to be CC Sabathia’s day, and he pitched a complete game shutout.

Nope. The day would belong to Alex Rodriguez, and the conquering hero made that very clear in his first at bat. Guthrie got Jeter to ground out to open the inning, but lost his zone and walked Johnny Damon and Mark Teixeira. That brought up Alex in a big spot.

Guthrie did something millions of pitchers at all levels have done throughout the history of the game. Having walked two guys, he tried to just throw a strike. Nice and easy. Down the middle. Alex probably wouldn’t be swinging anyway. After all, this was his first at bat against live major league pitching in months. Surely he would just want to take a couple of pitches to get Guthrie’s timing down, adjust to the big league crowd and take in the moment of his first day back in the bigs.

Faster than I can type “absolutely fucking not,” Alex unleashed his masterful right-handed stroke onto Guthrie’s down-the-pipe heater. Camden Yards quieted, and my living room exploded, as the ball sailed 393 feet into the left-center field stands for a three-run homer. Take that, media! Take that, Bud Selig!

The rest of the game was largely uneventful, as the Yankees won 4-0. Sparked by Alex’s return, and finally able to gel as a team, they went 89-44 the rest of the way, and took home the division crown. Eventually, and with great help from Alex in October, they took home their 27th World Series title. I’m not saying Alex was solely responsible for all of that, but it’s hard to argue that he wasn’t a big part.