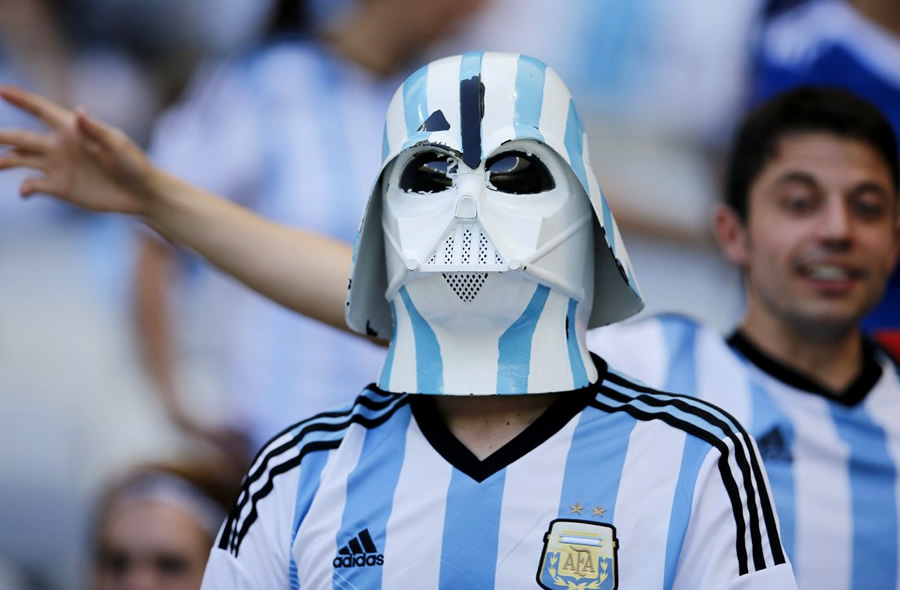 The 2015 Copa América kicks off today at 7:30pm ET, with the traditional host opening game. Chile will take on Ecuador in Estadio Nacional in Santiago, so I hope everyone’s ready. In the meantime, I’ll continue my group stage preview, this time with Group B. This group features a couple of bitter rivals, another “guay” team, and a rookie. Let’s take a look!

As much as it pains me to say it, I gotta believe Lionel Messi and crew are the favorites to win this tournament. They are pretty much fresh off of their runner-up finish in the 2014 FIFA World Cup, and they have basically the same team, Except they’re adding Juventus’ Carlos Tevez back to the mix. Tevez hadn’t been selected to the team in the three years prior to Gerardo Martino taking over the job last year. Argentina features world class talent all over the pitch, with some of international fútbol’s best players featured at almost every position.

Messi is the key, as he pretty much carried them to that second place World Cup finish, but Tevez, Sergio Agüero, Gonzalo Higuaín, Ángel Di María, Javier Mascherano, Marcos Rojo and GK Sergio Romero will all have a say as to how far the Albicelestes (blue and whites) make it in Chile. There’s really not much to say, other than that I hope Uruguay can upset them on the way to the Copa title for the second straight tournament. As good as Messi has been for FC Barcelona, he’s never won a meaningful international cup, and I’m hoping he goes without again.

El Bolso did a pretty good job of previewing this team on his TCR this week, so please go there for a detailed preview, and I’ll just talk about how great Uruguay is. If Uruguay is going to upset the Argentines, something i guess they kind of did in the 2011 semis (although I think Uruguay was the better team), they’re going to need two things: Defense and Edinson Cavani. The key to the defense is all-world defender Diego Godín, the Atlético Madrid center back, whom many put among the best defenders in the world. As Captain, it will be Godín’s job to keep that staunch Uruguayan defense working together, while the team figures out who’s putting biscuits in baskets up front.

The key to that will be all-world striker Edinson Cavani of Paris-Saint Germain. Cavani has been waiting for this to be “his team” for years now, first behind Diego Forlán and now Luis Suárez. Forlán is now retired from international competition (aka, he’s too old), so Suárez’s suspension now opens the door for Cavani’s rise to happen. It also opens the door for another young Diego, Diego Rolán, to strike his way onto the international scene. The 22-year old had a phenomenal season at Bordeaux, where he netted 15 Ligue 1 goals. Can Cavani take over? Can Rolán make his first major impact? If the answers to those questions are yes, then Uruguay could make this tournament interesting.

Paraguay, or “the other guays,” as I like to call them, have something to prove in this tournament. In 2010, they pretty shockingly made the World Cup quarter-finals. In 2011, they made it to the Copa América finals, losing to (who else) uruguay 3-0. In 2014, they didn’t even make it to the portion of the World Cup that everyone cares about. Argentine coach Ramon Díaz has to bring this squad back to where it was before last year’s World Cup, and what better way to start than at the Copa América?

Unfortunately for the Guaraníes, the talent might not be there to make this possible. Star striker Oscar Cardozo won’t be around. That being said, Paraguay is still fairly strong up front, with plenty of goal scorers, like Nelson Valdez, Lucas Barrios and even all-time leading scorer Roque Santa Cruz. Can those guys, especially the 33-year old Santa Cruz, get it going enough to surprise some people? I think Paraguay got some bad luck being placed into this group. I think the only saving grace for the Paraguayans will be the three points they get from Jamaica. That might just be enough to get them through with one of those third place slots, but I don’t see this team doing any real damage in the tournament, so they shouldn’t bother. Sorry, guays… better luck in 2019.

I get the feeling that, although Jamaica is bound for a group stage exit in their first ever Copa América, they could be a fun team to watch. I mean, for crying outloud, they have put a Z in place of an S in their official team nickname! How’s that for spunk? Head coach Winfried Schäfer, who is not, like other coaches in Jamaican sport, a former disgraced bobsledder who let himself go horribly, has a tall order staring him down when it comes to this group. Fútbol in Jamaica is still growing (they’ve only made one World Cup appearance, 1998), but the fact that they were even invited (yes, I know they were third in line behind Japan and China), proves that they’re starting to get some recognition.

Unfortunately, they definitely don’t have the talent that the other teams in this tournament boast. Of their 23-man roster, all but three guys play internationally, but only one man, Adrian Mariappa, who plays for Crystal Palace, can say they play at the top tier of world leagues. They have a lot of guys that I would say are in the next tier (four in MLS, one in Norway, one in Switzerland), but for the most part, this is lower level talent, and you can’t win major tournaments with lower level talent. If I had to pick a key man, I’d say it’s Simon Dawkins. Dawkins had a disappointing season for Derby County, but he might be ready to step up to the Premier League soon, and a good showing at this tournament would be huge for him.

As much as I hate to say it, I think I have to pick Argentina in this one. Messi is currently the best player in the world, and the Uruguayans don’t have Suárez. That being said, Uruguay will finish second, and paraguay sneaks through with their third place points.