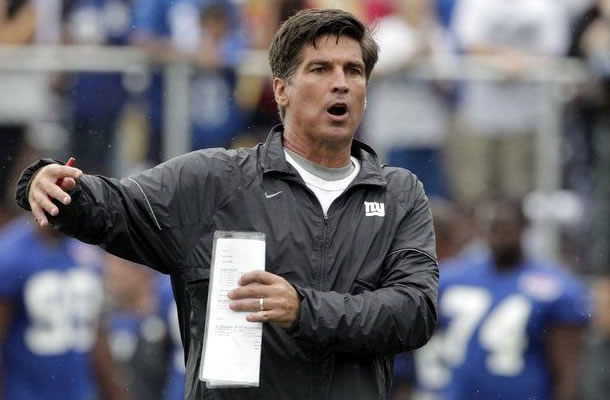 We’ve been through the offense, and the defense, so it’s only fair that we preview the oh so special Special Teams. After several years of non-threatening kick and punt returners, the Giants actually made some moves to boost coordinator Tom Quinn’s (pictured) troops in the offseason. Let’s check out the depth chart and see what’s going on.

Believe it or not, the battle for place kicker came down to one of the last few days of camp, and was one of the team’s more interesting pre-season battles (at least as interesting as a kicking battle can be). 35-year old Josh Brown, a 12 year veteran out of Nebraska, had one of his better seasons last year, as he made 23 of 26 Field Goals (88.5%) and all 31 of his PAT’s. Like an old lion trying to hang onto his pack, he had to fight off a younger, stronger lion in 23-year old Brandon McManus, a rookie out of Temple. McManus had the stronger leg, but the Giants chose the more accurate leg of their veteran, and will look to Brown to get them through at least one more year. Don’t feel too bad for McManus, though, as he was traded to the Broncos, where he will start while Matt Prater serves his four game suspension (alcohol).

Never fear, fans. Our favorite ripped-for-no-reason punter is back for another year! Steve Weatherford will, once again, handle the punting duties for the G-Men. It was never really a question, as Weatherford has great ability and has been a reliable veteran for this squad. He’ll also be doing all the holding for the G-Men, but I’m just wondering which muscle magazine he’ll grace the cover of this year?

This is where the Giants went out and tried to make a change this off-season. Let’s face it: the Giants return team has stunk for years. Not since the days of Dave Meggett have we really had a legitimate threat back there. OK Ron Dixon did take one to the house in a Super Bowl, but come on. Anyway, lot’s of guys took their shot at the job last year, from Jerell Jernigan to Rueben Randle to David Wilson. At one point, the main return man was Michael Cox, for crying out loud. Michael Cox!

This off-season the Giants addressed this need by signing two former Broncos, Quintin Demps (pictured above on his former team, the Chiefs) and Trindon Holliday. Holliday ended up on IR–probably because he’s the size of a leprechaun–but Demps has won one of the Kick Returner jobs. Demps returned 33 kicks for the Broncos last year, amassing 995 yards (30.1 ypr) and one TD. He’s a dynamic threat back there the likes of which the Giants haven’t seen in a while. The other Kick Returner will be third year man out of Florida State, whom we mentioned in our preview of the offense. The former Tampa Bay Buccanneer has experience with the job, and should provide some excitement. He’s also going to be the primary Punt Returner, although look for the more sure-handed Rueben Randle to possibly take some punts when the Giants are being pinned deep in their own territory.

I’m glad the Giants addressed this need in the off-season. David Wilson provided some excitement as a punt and kick returner, but his career ending injury put the kaybosh on any plans the Giants may have had for him in this role. The Holliday signing didn’t work out, but Demps is a great returner who should really help Eli get some good field position this season. The Kicking and Punting shouldn’t take any major steps forwards or backwards this year, which is fine because that aspect was solid last year. They’ll need the offense to give Brown more opportunities, but he should be up for the challenge if Eli can move the ball.

Big Ups to Zak Deossie (pictured). The eight year veteran is back again as the Long Snapper, which is possibly the least heralded position on the roster, but a very important one none-the-less. DeOssie, the son of former Giants’ Linebacker and Long Snapper Steve DeOssie (another BC grad), has two jobs in life: to snap the ball on punts and Field Goals, and to sire a masculine child that will also one day be a Super Bowl winning Long Snapper for the New York Football Giants (Steve won Super Bowl XXV, Zak won XLII and XLVI).