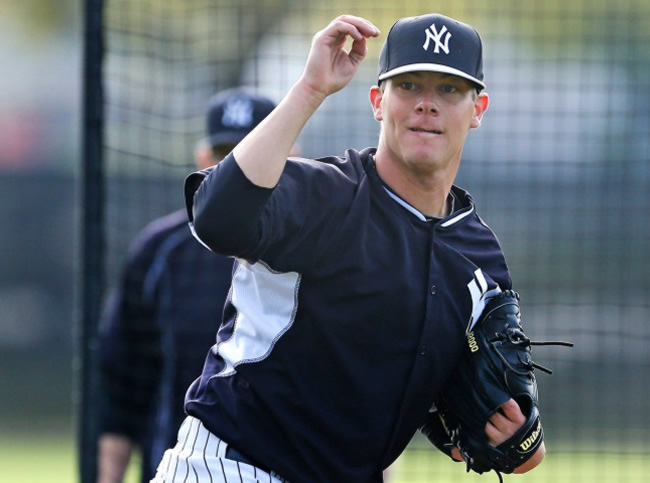 This post originally appeared last week on Pinstripe Alley. You can read the original here.

So far this month, the Yankees have made seven different call ups of relievers from the AAA Scranton/Wilkes-Barre RailRiders. This season alone, the Yankees have used 21 different players in relief, including former 1B/OF Garrett Jones, and nine of those 21 have been players making their major league debuts. They’re still carrying Chris Capuano on the roster. With Andrew Bailey now healthy and pitching effectively in AAA, why hasn’t he gotten his shot yet? Let’s dig into the numbers, and try to find the logic.

First of all, let’s get a quick background on Bailey, for those of you who haven’t heard about him quite yet. Bailey was originally drafted in 2006 by the Athletics, and made his major league debut with them in 2009. He spent three seasons as their closer before they traded him to the Red Sox with Ryan Sweeney for Raul Alcantara, Miles Head and Josh Reddick prior to the 2012 season. He spent two seasons in Boston, both of which were plagued by injuries and ineffectiveness. He last played for them in July of 2013, when he injured his shoulder. He hasn’t pitched since, but has been rehabbing under minor league deals with the Yankees since February of 2014.

After two long years filled with numerous setbacks, it seems that Bailey is finally healthy. He started the season all the way down in rookie ball, and has worked his way all the way up to Scranton, where he is currently serving as the RailRiders’ closer. His overall numbers look good, as he has gone 3-0 with a 1.80 ERA in 30 innings across four levels of the Yankees system. More importantly, Bailey has responded well to every level bump so far as well. Since reaching Scranton last month, he has gotten into six games, pitching 7.1 innings with 3 walks, 10 strikeouts, 4 saves and a 2.45 ERA. His fastball has been in the low 90s all season long, and his secondary pitches are holding up as well. That shoulder looks strong. Here’s a clip from spring training of him getting an out:

That being said, Bailey had major surgery two years ago. He repaired a torn labrum and a torn capsule in the shoulder, both of which are career threatening injuries. His shoulder could probably go at any minute, really. Some might see this as a reason to be cautious and not bring him up, but I see it differently. They don’t know how many pitches Bailey has left in that repaired shoulder, so they shouldn’t waste those pitches at AAA. They need to get those pitches to contribute to the major league team.

It’s no secret that the Yankees bullpen has been tired and overworked of late. Remember all the moves they made just this month? I think, during a pennant race, they need to be able to rely on experience, and it’s tough to throw rookies into such high pressure situations. I mean, they keep going to Capuano, for crying out loud. Why not Bailey? The main issue I see is that Bailey is not currently on the 40-man roster, so someone would have to be moved in order to open up a spot for the 30 year old right-hander. I have some candidates whom I think could easily go.

For one, the aforementioned Capuano could go, and I don’t really need to explain why designating him for assignment would be an OK move (they already did it once this year). How about Chris Martin? Martin looked promising early in April, but he got hurt and then faltered, and hasn’t been pitching all that well in AAA. Is he any more deserving of a 40-man spot than Bailey? No. Finally, why not move Dustin Ackley to the 60-day DL? There’s no sign that he’s going to be ready to return from his balky back any time soon anyway. Not one of those three moves would hurt the franchise, and they could see what Bailey has to offer.

I know rosters expand in 10 days, and I can’t imagine we wouldn’t see Bailey then, but why wait? The Yankees’ bullpen needs help now. I think Bailey can provide that help. What say you Cagesiders? Should Bailey be called up? Vote in the poll below, or leave me some comments too.