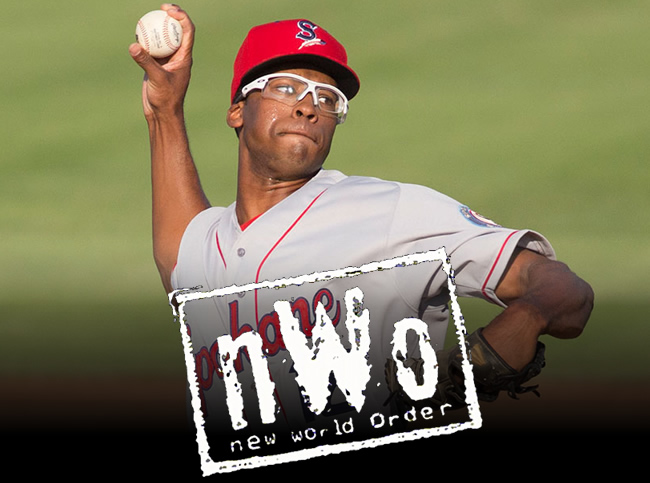 Pop quiz, asshole: You have to name all of the players the Yankees have ever drafted in the top five right now, or you’re not allowed to read the rest of this column. What do you do?

Well, luckily I’m not Dennis Hopper or Keanu Reeves, so I’ll actually recite the list for you. Ready? Settled in and comfortable for this long ride? And… go! Ron Blomberg (1st overall in 1967). Thurman Munson (4th in 1968). Brien Taylor (1st overall in 1991)… I hope you didn’t take a pee break, because you missed the whole list. That’s it!

Yep. In the vast and vaunted history of what is easily the greatest franchise in all of sports, there have been only three top five draft picks. You know who wasn’t a top five drat pick? Derek Jeter (6th in 1992). Due to their great success, the Yankees don’t typically find themselves drafting early enough to get “top five” talents. Hell, counting Jeter, they’ve only ever had three other guys in the top 10 (Jim Lyttle was taken 10th in 1966 and crazy Carl Everett was 10th in 1990).

Why am I talking about this? Because today’s “Who Did We Get” guy is Dillon Tate, who was the fourth overall pick by the Rangers in 2015. Although he wasn’t drafted by the Yankees, Tate’s talent is not one Yankees fans typically ever been exposed to over the years, so let’s get to know what makes him so special, and how he ended up in our laps.

So let’s forget the small talk, and get to the nitty gritty on Dillon Tate. The Yankees acquired the lightning-armed hurler on deadline day, along with prospects Erik Swanson and Nick Green (no, not that Nick Green), when they traded slugger Carlos Beltran to the Rangers. The Beltran trade, for all intents and purposes, represented the Yankees waiving the white flag on a season for the first time since the Bush administration (no, not that Bush administration). In Tate, however, the Yankees added a guy who was once a top-100 prospect, and currently sits 11th on the Yankees MLB Pipeline top 30 list.

Tate, a Harbor City, CA native, starred at UC Santa Barbara, where he began his career as the team’s closer–a role he reprised for Team USA in 2014–but moved into the rotation as a junior when an injury left the Gauchos a man short in their starting five. Here’s what Pipeline has to say about him:

Tate can dominate hitters with two pitches, a lively 92-98 mph fastball and a sharp 85-89 mph slider. However, his velocity and the quality of those offerings has fluctuated since he strained a hamstring and missed three weeks in April. He has improved his changeup since he started using it more often, but it still has a ways to go before it becomes a reliable third pitch.

Tate’s stuff faded a bit as the draft approached because he far exceeded his previous career high in innings, so Texas limited to nine innings in his pro debut. Most scouts think he can remain a starter because he’s so athletic, which helps him throw strikes and should allow him to stay healthy and smooth out his delivery.

OK let’s start with the more eye-popping part of the report first–the fastball/slider combination. Despite not being overly large for a pitcher, Tate manages to get a lot on his fastball, and enough on his slider that it becomes problematic for opposing batters to deal with. With that deadly one-two combination–you don’t see all that many guys that throw both of those pitches that hard–you can see why Tate made a good closer in college and on Team USA. As I’m sure Yankees fans are familiar, after having basically the three best closers in the league on the roster at the same time, you only need two good pitches–and sometimes even one really fast one will do–to dominate if you’re going to be only pitching one inning.

I find it very encouraging that Tate was able to handle the transition to the rotation, at least at the college level. While ultimately he might just be yet another dominant arm in the Yankees bullpen (yawn), the scouting report gives me hope that he’ll be able to develop that changeup to the point where it’s a serviceable, and he can pitch every fifth day. Also, he’s a righty, so you know the Yankees will have someone teach him how to throw a cutter anyway, which will help him give hitters a slightly different look from his heater and his slidepiece. It’s the Yankee Way™.

Unfortunately for Tate, his professional career hasn’t gone as smoothly as his college career did. As mentioned above, he hurt his hamstring this year, and his velocity has dipped to the low 90s ever since. Because of that, he’s struggled to a 5.12 ERA (4.43 FIP) in 16 starts and one relief appearance. Basically, all of his good numbers are down, and all of his bad numbers are up. That’s why he dropped from the #46 spot on the MLB Pipeline top 100 after the draft to out of the top 100 this year.

I’m not an expert, or a doctor, but his injury might be causing his pitching issues. Now, a hamstring injury won’t make your arm worse, but if he’s still hurting–or too timid to go all out with his legs–it will definitely affect his ability to drive with his lower body. I think this explains the dip in velocity.

What the Yankees want to make sure they do is get him healthy and, more importantly, get him to trust his leg again. If they can do that, and get Tate back to throwing the nasty pitches he used to throw, then he could end up back in the top 100 in no time.

According to NJ.com, it seems the team already has a plan in place to do just that. First, they won’t try to overwhelm him by promoting him. Instead, they’re going to send him to Charleston, keeping him in Low-A, where he’s been all season. Secondly, They’ll send him back to the bullpen, where it will be easier for him to work on the adjustments they need him to make.

Thirdly, they’ll bring in Danny Borrell, one of their minor league pitching coordinators, to immediately get to work with Tate. Charleston pitching coach Justin Pope, who has gained praise in the organization for working with tall righty Domingo Acevedo, will also pitch in on Tate.

There’s no doubt that Tate is a work in progress, but the Yankees have a great organizational staff. Best case, he gets healthy, the Yankees get him out of his own head, and the 22-year old resumes his climb to the big leagues next season. I’ll be following closely for sure.