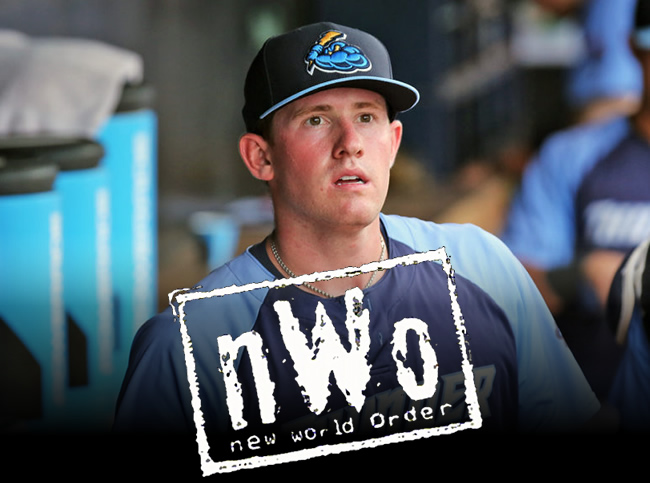 If I have said it once, I have said it a million times. There’s one type of player the Yankees love more than anyone in the world. To steal a line from Cedric the Entertainer, they love these guys like play cousins. To steal a line from 50 Cent, they love these guys like a fat kid loves cake. To steal one last line, this one from Selena Gomez, the Yankees love this type of player like a love song, baby.

Don’t believe me? Let’s go through the pre-deadline list, level by level. Major League: Brett Gardner. AAA: Jake Cave and Ben Gamel. AA: Dustin Fowler and Mark Payton. A+ Tampa: Devyn Bolasky and Jeff Hendrix. A Charleston: Nathan Mikolas. We’ll stop there, because I think I’ve made my point. Look. I’m not saying the Yankees are racist, I’m just pointing out a pattern that I have noticed.

If you’re paying attention, you’ll notice i said “pre-deadline.” Not surprisingly, the Yankees found themselves yet another one of these types of players when they traded Aroldis Chapman to the Cubs, and that’s who we’re profiling here today. Let’s get to know the fifth and final new addition to the Yankees’ top 30 prospects on MLB Pipeline (he slots in at #16), the somewhat undersized, left-handed, scrappy, non-power-having, somewhat speedy but all-out-hustling caucasian outfielder… Billy McKinney!

As I mentioned, 21-year-old Billy McKinney came to the Yankees–along with Adam Warren, Gleyber Torres and Rashad Crawford–when the Bomber brass finally allowed Brian Cashman to run the Yankees in a realistic fashion. At the time of the deal, McKinney was the fifth best prospect int he Cubs’ system, meaning the Yankees received two of their top five guys in the deal. Not bad, Cash.

Despite the fact that he hasn’t yet made his big league debut, McKinney has already been in three organizations. He was originally drafted by the A’s in the first round (24th overall) of the 2013 draft. Interestingly enough, that was the same round in which the Indians took Clint Frazier and the Yankees took both Ian Clarkin and Aaron Judge. All four guys are now top 30 prospects in the organization.

In July of 2014, McKinney, Addison Russell and Dan Straily were dealt to the Cubs in exchange for Jason Hammel and Jeff Samardjiza as the A’s made a push to bring a title back to Oakland (they didn’t.). Now, McKinney is a Yankees farmhand, so let’s see what the MLB Pipeline scouting report says about him:

For most of his pro career, McKinney has displayed a quick left-handed swing, tremendous hand-eye coordination and mature approach. But he hasn’t looked the same in 2016, with his bat appearing slower as he has made less hard contact than usual. He draws enough walks to record healthy on-base percentages, though some evaluators question how much over-the-fence power he’ll develop.

Most of McKinney’s value comes from his bat. He’s a decent athlete with fringy speed and arm strength, which doesn’t make him much of a factor on the bases or in the outfield. Though he broke into pro ball in center field and has mostly played in right since coming to the Cubs, he fits best in left.

The first sentence of that scouting report is awesome. It shows you why the A’s originally drafted McKinney, and why he was the fifth ranked prospect in the Cubs system, right? Unfortunately, it gets a little dodgy after that.

The Yankees are betting that 2016 is just a blip on the radar, and that a change of scenery–and their top-notch staff organizational staff–can fix McKinney’s woes, and fast. So far, McKinney has looked like a wise investment. Through his first seven games with AA Trenton, McKinney is hitting .320/.370/.440 with a homer and 4 RBI. He’s walked twice, and only struck out once. So far, so good.

Ignoring the numbers in Trenton, McKinney is a little bit of an enigma right now. Although some scouts think he might develop 15-20 home run power some day, some think that power will never come, and that all of McKinney’s value will come from his ability to hit for average and get on base. If he can’t hit for average anymore, has his only projectable major league tool disappeared?

Let’s all calm down a little bit. Do his overall struggles worry me? Sure, but you also have to remember that, at 21 years old, he’s still three years younger than the average AA player. Also, he was a top 100 prospect just last year. For some hitters, it takes a while to figure things out on a level-to-level basis. He might also still be dealing with some residual effects of the knee injury he suffered late in 2015.

Maybe Billy just hasn’t gotten the hang of AA pitching yet. Maybe he never will, but maybe he’ll hit .320 the rest of the year, and do the same at AAA next season. With prospects, you never know. They’re all a gamble. That’s part of the fun! For now, he’s one to keep an eye on. We probably won’t be able to judge him for another couple of seasons.

That might be true, Sidney but they sure can play outfield for the New York Yankees…if they’re somewhat undersized, left-handed, scrappy, non-power-having (or maybe some-power-having) and somewhat speedy but all-out-hustling!