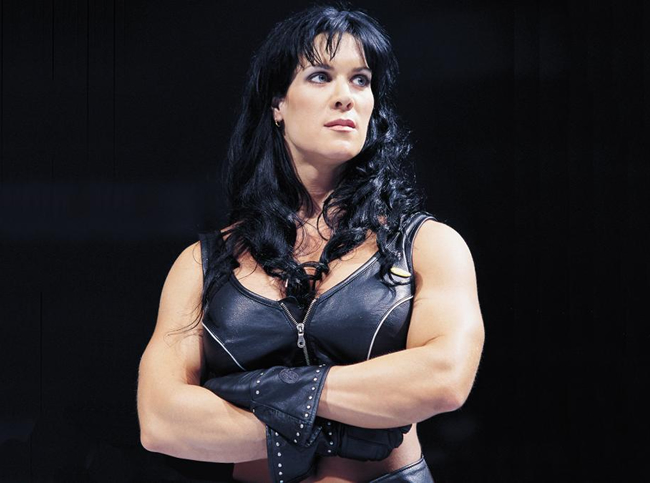 Because of the advent of the WWE Network, I’ve been able to go back and watch my favorite eras sports entertainment over again. My current goal is to go through WWE’s “Attitude Era” on a Pay Per View by Pay Per View basis. I decided to do this mostly to relive my favorite memories from such amazing WWE superstars as “Stone Cold” Steve Austin, The Rock, Mick Foley, Shawn Michaels HHH and other stars of the time, but just a few PPVs into my viewing, I saw the debut of a somewhat forgotten and much maligned WWE superstar, Chyna. So far, I’ve only been privy to her early work as HHH’s valet, but it has made me really appreciate her character. I also realized that she should be, beyond the shadow of a doubt, in the WWE Hall of Fame. Here’s why.

As usual, let’s start at the beginning of Chyna’s story. Like HHH before her, Chyna, whose real name is Joanie Laurer, trained at the Malden, Massachusetts school belonging to the legendary “Killer” Kowalski (not at the same time, though). The interesting thing about Laurer is that, although she trained and did do some time around the independents, that part of her career was very brief. Within two years of her first match, she was debuting on WWF television. Usually, guys (and gals) have to toil in the independents for a while before getting noticed. Laurer’s big break came in 1996, when she met HHH and Shawn Michaels at a wrestling show. The two were impressed and convinced Vince McMahon to bring her in.

Like many wrestlers, Laurer was introduced as a planted fan in the crowd. She was in the first row of In Your House 13: Final Four, choking Goldust‘s valet, Marlena during Goldy’s match with HHH. She immediately became HHH’s body guard, accompanying him to the ring for all of his matches. Often, she used nefarious tactics, like attacking opponents behind the referee’s back, to help HHH (who was still going by the full Hunter Hearst Helmsley) win matches. With her character, Chyna revolutionized the role of the woman in the professional wrestling industry. Sure, the cheating bodyguard gimmick had been used a million times before (Diesel and Sycho Sid were used as bodyguards for Shawn Michaels, Mr. Hughes was used as a bodyguard for several wrestlers, including HHH, etc), but we had never seen the bodyguard figure played by a woman on such a big stage before (at least for male wrestlers).

Not only was this a new and refreshing take on the bodyguard character, but Chyna had one of the most unique looks in the industry, which made her completely believable as a female enforcer. First of all, she was jacked, packing 200 lbs of muscle onto a 5’10” frame. Despite her musculature, however, I wouldn’t say Chyna looked manly though. When you look at other muscular females that would come along in the industry, like Nicole Bass, many of them looked like men in wigs. Sure, Chyna was no pinup beauty or anything, but she just looked like a jacked up woman, at least to me. Eventually, she would get breast implants and have work done to improve her jaw line and such, but that original Chyna look was impeccably intimidating and just plain bad ass.

Finally, let’s talk about her career accomplishments. First of all, she started as the enforcer for Degeneration X, which was among the most talked about factions in all of wrestling, so she got plenty of face time on the biggest WWF shows of the time. It was when she went solo, however, that she made her biggest impact on the history of the industry. In 1999, Chyna entered the Royal Rumble, making her the first woman ever to do so. Later in 1999, she qualified for the King of the Ring tournament, also a first for women in WWF history. At one point, she was even the number one contender for the WWF Heavyweight championship, which is almost unfathomable. While she never wrestled for the WWF title (thanks, Mankind), she feuded over the Intercontinental Championship with Jeff Jarrett, actually winning the belt at No Mercy later that year. You guessed it, she was the first (and only) woman ever to win that strap. Her most memorable feud as the IC champ was the one she had against Chris Jericho, whom we all know as one of the most respected and talented WWF/E superstars of all time.

Her popularity continued in 2000, as she was paired with Eddie Guerrero, giving birth to her “Mamacita” gimmick (and that awesome entrance song for Eddie). Around this time, she parlayed her WWE popularity into more public fanfare by posing for Playboy magazine (yes, this was after she’d had her cosmetic enhancements, but still a rare honor). After the playboy spread, she began feuding with women for the first time, really, eventually winning the WWF Women’s Championship at WrestleMania X-7. She was still champion when she left the WWF later that year, never to return again.

I think the accomplishments speak for themselves. For a woman to achieve the things Joanie Laurer achieved while in a business run by (and performed mostly by) men, was pretty spectacular. After her, there were many impostors, like WCW’s Asya (I mean, come on…) and the aforementioned Nicole Bass (who came to WWF from ECW), but no one really ever made the connection to audiences the way Laurer did, and nobody really successfully feuded with men like Laurer did (in mainstream wrestling anyway). Whether those women didn’t have the star power or work ethic to make it happen, or whether Laurer just came along at the right time, in the right era, I don’t know; but has never been another Chyna, and I’m not sure there ever will be.

I know she’s fallen on hard times since leaving the WWE; battling addiction, making messy appearances on reality tv and even entering the porn business, but I think it’s time for her to come home. I don’t know how the relationship between Laurer and the WWE is right now, nor do I know anything about her state of mind and health at the moment, but the Ultimate Warrior‘s return, and subsequent death, have really brought to light the fact that life is far too short to hold grudges. Recently, Paul Levesque (HHH’s real name) has spearheaded other homecomings, like Bruno Sammartino and the Ultimate Warrior himself, so I’m hoping he’ll make Chyna his next target. The two have a history both on and off camera, after all. There’s no need to wait 18 years, or until another untimely death, before inducting a deserving WWF legend into the WWE Hall of Fame.

31 thoughts on “When Is Chyna Getting Inducted?”