Warning: "continue" targeting switch is equivalent to "break". Did you mean to use "continue 2"? in /nfs/c11/h04/mnt/193474/domains/jobusrum.com/html/wp-content/plugins/wp-author-box-lite/includes/ReduxFramework/ReduxCore/inc/extensions/customizer/extension_customizer.php on line 478
 What's the Next Big Thing for "The Next Big Thing"? | Jobu's Rum
Skip to content 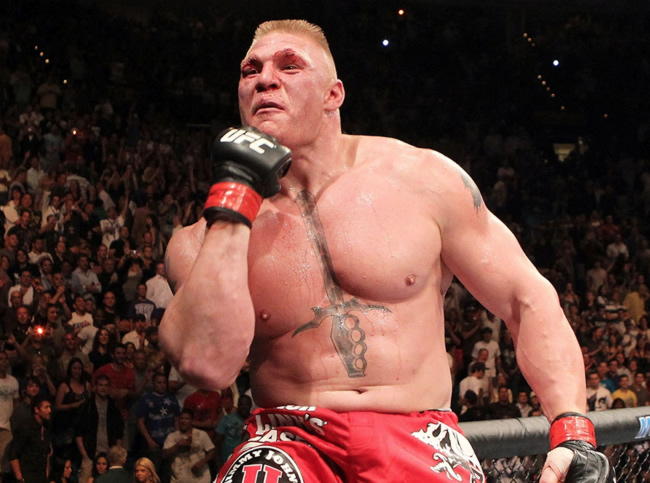 For those of you who missed it, last Friday was UFC 141: Lesnar vs. Overeem. The main even pitted former heavyweight champion Brock Lesnar against Alistair Overeem. Lesnar was trying to use a big win to catapult himself back into the championship conversation, and Overeem was trying to stop him. In the end, Overeem won and Brock Lesnar retired. So why should you give a crap? I’ll tell you.

I first heard of Brock Lesnar in 2000, when he was being recruited by Vince McMahon after his stellar collegiate wrestling career (2 time NJCAA All-American, 2 time NCAA All-American, 2 time Big Ten Champion and the 2000 Heavyweight Champion). When he actually signed with the WWE and made his debut later that year, he was a freak of nature. The writing for his character was also done perfectly. He was portrayed as “The Next Big Thing”; a completely unstoppable beast. He was booked in a bunch of “squash” matches (where he just squashed his opponents in fast and violent fashion), and no one came close to beating him for a while.

Brock had the physical ability to back up the portrayal of his character too. Here’s a guy who was 6’3″ and 290lbs, who could probably lift up a horse (he did it to The Big Show, which is close enough) and he could also do the high-flying arial maneuvers from the top rope that only guys half his size should have been able to do. Anyway, because of his size and skill, he became an instant hit with the WWE fans, was quickly pushed into “main-event” status, headlining most WWE shows and PPVs. Just as suddenly as he rose to prominence, Lesnar decided to throw it all away in order to pursue an NFL career. He’d hadn’t even played a down of football in college, but he thought he could do it. He actually almost did, but he didn’t make the Vikings out of training camp, and decided against playing in NFL Europe because he wanted to stay near his family.

After wrestling around Japan for a couple of years, he joined the UFC in 2007. There, his star again caught fire rather quickly. In just his fourth professional UFC fight, Lesnar won the Heavyweight Championship from UFC legend Randy Couture and his star was re-born. Shortly thereafter, however, it was discovered that Lesnar was suffering from Diverticulitis, an intestinal disorder that attacks the colon. In Lesnar’s case, it caused a perforation in his intestine that leaked fecal matter into his abdomen… That’s not gonna be good for business if you’re an MMA fighter.

Lesnar underwent multiple surgeries in order to fix his intestines, but I think it probably had a heavy hand in derailing his once promising MMA career. Lesnar would fight only four more fights after his championship win, defending his title twice before losing it to Cain Velazquez in 2010. His ongoing battle with diverticulitis limited him to just one fight in 2011, his devastating loss to Overeem last Friday. After the match Lesnar delivered a seemingly rehearsed retirement speech, explaining that, had he won, he would have fought one more time for the heavyweight championship and then retired. He had promised his wife (remember Sable?) he would retire if he lost to Overeem, so he did. This led to some criticism because Lesnar was basically leaving Dana White holding the bag by retiring.

Back to the question I asked at the beginning of this post… Is this a big deal? Despite only eight career fights, Lesnar was one of the most recognizable stars of Dana White’s UFC. I feel like most guys work for years and years to achieve what Lesnar was given in just his fourth professional fight. Was this a case of Dana White using Lesnar’s celebrity as a former WWE icon to try to make himself some money? Maybe, but Lesnar did win the belt. That didn’t get handed to him at all. While his title reign was short-lived, that may have had more to do with the major health issues he was experiencing, rather than a lack of ability or decline in skill. If anyone’s ever had an upset stomach, it tends to mess up your day. Imagine having poo leak into your abdomen! You wouldn’t want to get out of bed, let alone train for MMA fights. I think Lesnar did an admirable job being one of the faces of MMA despite his troubles (even if he sometimes said silly things after his fights). I can tell you that I don’t know more than a handful of UFC names, and Lesnar is one of them. I’ve also seen his fights covered on sportscenter, which is saying something too.

At the end of the day, this won’t be good for the UFC, but it certainly won’t be a crippling blow by any means. UFC has survived for decades despite it’s “fringe” status. I feel like most people who watch UFC don’t brag about it, but it still lives on. The mentality is that you will see things you won’t see in boxing. I myself tend to prefer boxing because it’s a little less brutal. I’ve seen never seen a guy get his arm broken during a boxing match, which makes me a little more inclined to watch that. On the other hand, I’ve never seen a guy get his arm broken in a boxing match, which might actually make me tune in to MMA sometimes. The point is, MMA has it’s loyal audience, and they will stay loyal till the end. They might lose some of the general population, but someone else exciting will eventually come along and those fans will come back. Lesnar saw the UFC as another athletic challenge in his life. He defeated that challenge by becoming the Heavyweight champion, so he can move on without really any regrets (especially since he left because of his family). Sure he could have stuck around to try to win it again, but at 35 years old, he knew he was done. Good for him. Why stick around to get beat up for a living?

So what’s next for Brock? Rumors have been flying that Vince McMahon needed to change his sheets after he heard Lesnar was retiring from the UFC. Lesnar recently signed a deal to appear in WWE ’12 for the PS3, and McMahon attempted to get Brock to come back for a Wrestlemania angle last year (negotiations with White stalled and the two didn’t come to an agreement). At the very least, you can expect Brock to receive a very lucrative offer to return to the world of fake wrestling. I for one wouldn’t mind seeing him back in a WWE ring. He’s still young for professional wrestling, and could probably finagle a reduced schedule of some kind to make sure he stays healthy. He could even come back for just a big event or two, like The Rock has done this year, and take home a few million dollars for his troubles. The WWE just brought back a 41-year-old Chris Jericho for the third time, which shows that the brand is probably lacking a couple of stars (they are in the process of making some new ones, but it isn’t easy). I think Brock would probably be a perfect fit if the money is right and his desire to only get pretend knocked out is still strong.

Whatever Brock Lesnar decides to do, his time in WWE and MMA will not be easily forgotten. We at Jobu’s Rum wish him success.

Here’s the video I promised earlier: