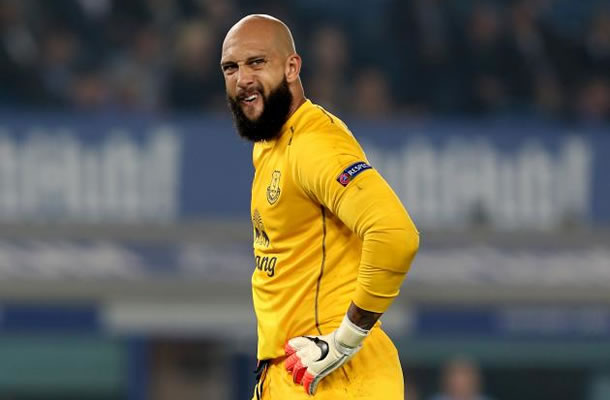 We all fell in love with Tim Howard‘s net minding ways this past summer, when he had the game of his life against Belgium, knocking away 16 shots in the USMNT’s 2-1 Round of 16 loss. In that game, most Americans discovered something that fans of the Barclay’s Premier League have known for years–Tim Howard is one of the best Goal Keepers in the world. So what’s the deal with his awful start for Everton this year?

Seriously, when I say Howard’s off to a bad start, I’m talking bad. Like the beginning of Ladybugs bad. Everton opened the season with back-to-back 2-2 ties against newly promoted Leicester City and Arsenal, the latter of which involved blowing a 2-0 first half lead. After that, they got hammered in Week 3 by Chelsea, 6-3. They rebounded to beat West Bromwich Albion 2-0, but were then beaten 3-2 by Crystal Palace this past weekend. Howard has been in goal for all five of those matchups, which means he has given up 13 goals in league play so far. That’s a GAA of 2.6. That’s not good. We’re not even taking into account the two other games Everton has played, a 4-1 win in the Europa League group stage against Vfl Wolfsburg, and a 3-0 drubbing at the hands of Swansea City in the League Cup on Tuesday. That’s 17 goals allowed in 7 games for Howard, or a 2.4 GAA (at least it went down).

I know you can’t blame every goal on the keeper, because bad defense has led to a lot of opportunities for Everton opponents too, but at the end of the day, he’s the Goal Keeper. His job is to keep the goal, mind the net and just stop the other team from scoring. I’m not trying to shit on the man while he’s down, but we saw him make a couple of mistakes during the World Cup–before he became the United States Secretary of Defense and saved Bambi from slipping on the ice. He’s never been a perfect goalie–just one of the best–but this season has been pretty abysmal.

Howard literally saved everything in this game, all while doing the YMCA dance. Amazing!

At 35, could his career be winding down? There are signs that Timmy might certainly be looking to gracefully end his time as an athlete. For one, he started taking gigs as a guest on NBC Sports broadcasts of Premier League games last season, and signed on for ten more games this year. It’s a little weird for him to be in the booth for league games while still being an active member of a team in the league, but it should make a potential transition to full time commentating much smoother when he leaves the pitch. We also saw that Howard asked for a year off from international play, leaving Jurgen Klinsmann to pick a new goalie as the team prepares for the Gold Cup in 2015. While I don’t think Howard will be missing any games that actually count, it’s clear that the World Cup took a lot out of him this year. Did the tournament take something out of him that he can’t get back? I guess that remains to be seen.

Look, I’m not criticizing the man. He will go down in history as the greatest goal keeper in USMNT history. No disrespect to any of the other guys, but the only other USMNT goalie I can even think of off the top of my head is Tony Meola. America has other great keepers, like Aston Villa’s Brad Guzan and Real Salt Lake’s Nick Rimando (two of the guys fighting for Howard’s vacated USMNT spot), but those guys haven’t really gotten much play for the USMNT, and they certainly haven’t had a game like Timmy had for USMNT against Belgium. I just want to remember that Howard, and not one who is potentially beginning to break down.

Tom Brady said a couple of weeks ago that he wants to play football until he sucks, and then retire. I’m not saying it’s time for Howard to go just yet, but if he doesn’t turn things around, he might need to just walk away from the Premier League. Hey, he can always return as a hero and play a couple of years in MLS.

One thought on “What’s Going on With Tim Howard?”