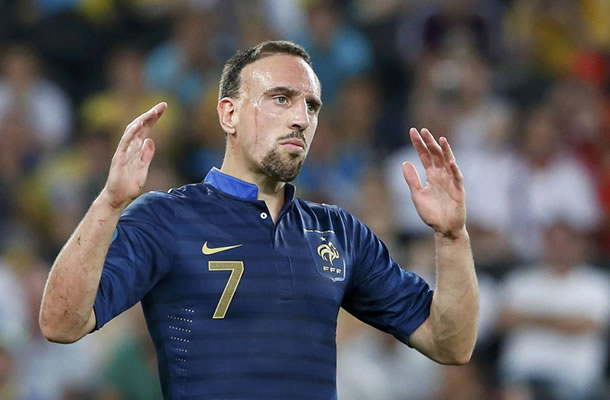 When I was just out of college, I worked full time at a Champs Sports in Natick, MA. At the same time, I took a part time job as a barback at local Boston College watering hole, Maryann’s. I didn’t really need the Marryann’s gig, but I liked making a little extra money, and they needed a guy, so I took the job. When my full time job became too much, I decided to stop working at Maryann’s. Everyone wished me well, and that was that. What does this have to do with Franck Ribéry and the French national team? Well, imagine if Jay, the manager at Maryann’s, had told me I had to continue working there or I would be suspended… from my full time job at Champs. Makes no sense, right? Well, the French FA president and head coach are threatening are threatening to do to Ribéry if he doesn’t play for France in the upcoming qualifying matches for the European Cup. Intrigued yet? Let’s get to all the ridiculous details.

As I’m sure you international fútbol fans remember, Ribéry opeted out of this summer’s World Cup due to a back injury. This back injury has actually kept him off the field since then, and he has also been unable to play for his club team, the Bundesliga’s Bayern Munich. Ribéry, who is 31, opted to retire from the French national team, presumably to focus on his health and his full time club gig at Bayern… Or maybe he just didn’t want to play for France. Who cares? Pretty standard right? The guy doesn’t want to play for France anymore, and has informed them of that fact. That’s the responsible move. Let’s celebrate the many accomplishments he was able to share with France, including the World Cup final he helped the team reach in 2006, and send him on his way as the hero he is… right?

Wrong. Soon after Ribéry’s announcement, coach Didier Deschamps came out and said that playing for France was not Ribéry’s decision to make. He was not only backed by French FA president Noël Le Graët, but also by Michel Platini, the president of UEFA.  Not only that, but Ribéry was threatened with a three-game suspension from Bayern Munich if he didn’t report to France’s training camp.

Coach Deschamps is seriously attempting to force a player to play for his team.

Now, let me explain the rules before we all get too upset about it. There is a rule that states that players face a suspension if they are called to represent their country in a tournament and refuse to do so. That rule, however, was set up by FIFA to protect national teams from having club teams refuse to send their players over for international duty. The spirit of the law is to protect not only international teams, but also the integrity of international tournaments, from greedy club team owners. After the news broke last week that Real Madrid tried to prevent their star player Ángel Di María from suiting up for Argentina in the World Cup Final in July, you can probably see why this type of rule needed to be established. The spirit of the law is not to force players to represent their country if they don’t want to. What France is doing is taking the literal letter of the law and attempting to force Ribéry into duty. Sure, teams need to be protected, but who is protecting the players in this scenario?

I know what you internationalists will say. He’s going to get paid handsomely for his work for France, and he should be patriotic. There are men who die for their country, and all he has to do is kick a ball! I hear that. I don’t agree with that, but I hear it. Technically, if you’re a jerk about the letter of the law, you can force a player to play for you on the international lever, but who does that? When Frank Lampard and Steven Gerrard announced their retirements from the English national team, the English FA thanked them and treated them with the respect they deserved. Granted, those guys are a bit older than Ribéry, but they don’t quite have the injury history of the Frenchman. Also, why would you even want someone there who is not there of his own free will? Have you ever performed your best in any situation in which you were forced, under the threat of punishment, to participate? No! If i had been forced to haul cases of beer, wipe down the bar and clean glasses against my will at Maryann’s, a lot of BC kids would have been drinking out of dirty glasses, and a lot of free beers would have probably found their way to tables where my friends happened to be sitting. I’m not saying Ribéry would tank his performance because no real sportsman would, but his heart would certainly not be there.

Deschamps and Le Graet need to use their common sense here and let Ribéry stay home. If they want, they can secretly hate him forever, stop inviting him to national team barbecues and remove him from the Secret Santa hat of names at Christmas time, but they need to leave him alone. You understand why they’d want him there, and be upset at him for retiring, but if they had kept quiet, Ribéry would be the bad guy. He could be painted as the deserter. Now, France just look like a bunch of dicks… what else is new?