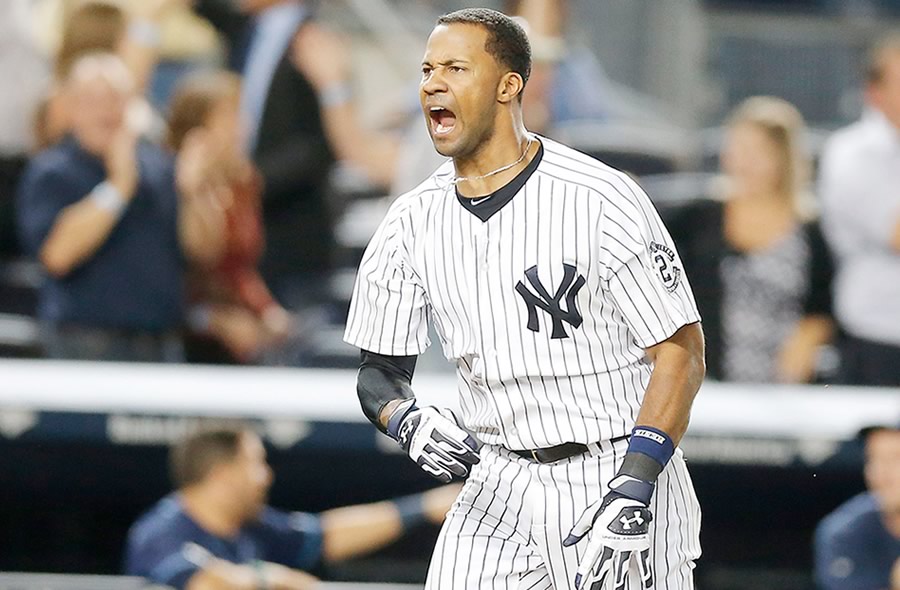 Last August 27, the Yankees bolstered their bench for a possible playoff run by signing Chris Young, who had been released by the Mets 12 days prior. While Young’s acquisition didn’t gain the Yankees a playoff spot, the 31-year old performed well enough to make the Yankees think he’d make a solid fourth outfielder. During the offseason, they signed him to a one year deal worth $2.5 Million. So what can they expect from him this year?

Prior to signing with the Yankees, Young was viewed by almost everyone as being on the verge of being washed up. I say almost everyone, because the Mets had signed him to a one year, $7.25 Million deal during the 2013/14 offseason. Gotta love those Metsies, right? Anyway, prior to his fall from grace, Young was primarily known for his speed, power and defense. Never a guy to hit for very high average, he none-the-less showed near 30-30 potential for his first few years in the league with the Diamondbacks. When his production and durability started slipping in 2012, the Diamondbacks shipped him to Oakland that offseason, where he continued his struggles for the 2013 season. That’s when the Mets stepped in with the semi-big money deal. Good job, Mets. With the Mets, Young hit a paltry .205/.283/.346 with just 8 homers and an OPS+ of 81 in 88 games, before they told him to pack his bags and go.

Young really revitalized his career in that 23 game stretch in pinstripes. He showed that he can perform in a limited role last year with the Yankees, slashing .282/.354/.521 with 8 doubles, 3 homers and 10 RBI in 23 games, mostly as a left fielder for the Bombers, filling in for the injured Brett Gardner. Beyond having good numbers, Young had some pretty big hits for the team too. His biggest game as a Yankee was definitely on September 11. On what is usually a somewhat somber game day for New York, they were also getting no-hit by Alex Cobb of the Rays. In the 8th inning, Young doubled off Cobb to break up the no-no, and scored on a home run by Martin Prado. Unfortunately, the Yankees were still down 4-2. Young changed all that in the bottom of the ninth, when he hit a three-run walk off home run off of Jake McGee. The people of New York always need something to smile about on 9/11, and Young provided a wonderful moment for us all. The very next day, he gave the Yankees a 1-0 lead in the top of the 11th in Baltimore with another home run and, although the Yankees eventually lost the game, it felt like an equally big hit at the time. Like I said, he performed admirably during his time int he Bronx, and we were glad to have him on board.

So, what can we expect this year? Well, if all goes well, he will solely be the fourth outfielder for this squad, providing late defensive help and right-handed power off the bench, both of which are always nice to have on a team. I think he can do a comparable job to the one done by Marcus Thames in 2010 (.288/.350/.491 with 12 home runs and an OPS+ of 122 in 82 games) and Andruw Jones in 2011 (.247/.356/.495 with 13 home runs and an OPS + of 126 in 77 games). If Young can hit that way, I think we’ll all take that with a big smile on our faces, right? Realistically, I think Young can do it. If, however, like Ichiro last year, Young is forced to play every day, then the Yankees will be in a lot of trouble. I’d like to think that they would choose to call up a Tyler Austin or Ramon Flores to start in case of an injury, keeping young on the bench, where I think he will thrive. I guess we’ll all find out soon.