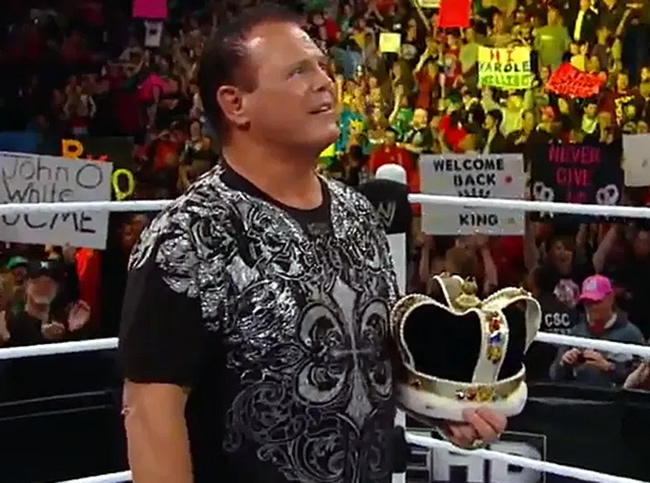 As many of you know, I was a big fan of wrestling growing up. I even have a little side gig writing for The Came Clutch Blog whenever I can pry myself away from Jobu’s Rum (you can read my posts here). While I definitely don’t watch as often as I used to (mostly because the product isn’t as good as it was in the late 90s), I tuned in the other night to watch the return of The King… and I’m not talking about Aragorn.

Monday’s episode of Monday Night Raw featured the return of the one, and only, Jerry “The King” Lawler. For those of you who don’t know, Jerry suffered a massive heart attack on the air about two months ago while calling a match with his broadcast partner Michael Cole. About 20 minutes earlier, Lawler, who is 62 years old, had wrestled a cage match against WWE champion, CM Punk (although he showed no signs of any age or rust in the ring). It was a pretty awful scene, as Lawler could be seen off camera slumped over in the announce booth, and was eventually rushed to the back by paramedics.

In the back, Lawler was basically dead for anywhere from eight to twenty minutes, depending on what reports you read. Either way, that’s a long time for the brain to not be receiving oxygen. Lawler was eventually revived, and woke up a day or so later with, amazingly, no brain damage. After a couple months of recovery, he returned to the broadcast booth last night… and what followed was typical Jerry Lawler. A guy who quite literally nearly gave his life to the business used his near death experience to further the character of another wrestler on the roster.

It went down like this. Lawler came out, walked a lap around the ring shaking hands, embraced his good friends Jim Ross and Cole, and then gave a very emotional thank you speech to the crowd, who made it clear that they were happy to be his royal subjects. That’s when CM Punk’s music hit.**

I, along with the entire arena, didn’t know how to feel. They wanted to cheer Punk (who is a bad guy, but very popular), but there was some apprehension… Was the WWE about to turn Lawler’s heart attack into an angle? Yes they were, and, frankly, I thought it was pretty great. I’ll spare you all the details, but I’ll sum it up with one quote from CM Punk.

“Jerry, I’m glad you left the ring when you did. Because, if you didn’t, I would have beat you to death… again.”

Now, some of you might think its a bit garish to turn such a serious situation into fodder for a television show about grown men in tights fake fighting each other, but you need to realize what kind of guy Lawler is. As I said before, he would, and nearly did, give his life for the business. Punk, meanwhile, has been WWE Champion for over a year, but hasn’t really gotten the crowd to hate him as much as you should hate a bad guy champion. They recently paired him with Paul Heyman, one of the best (or worst) bad guy managers in wrestling today to try to get him more heat. It hasn’t really worked. Basically, they’re trying everything in their power to get this guy over as a heel, but all the fans want to do is cheer him on.

Before the heart attack, the WWE put Punk in a program with Lawler because it’s easy to hate a guy who picks on an old announcer. It was actually working rather well before the attack. When Lawler returned on Monday night, and Punk ripped into him again and crapped all over his welcome back party, they cemented the hatred. It was just another case of Lawler doing all that he could to help the business that made him the man he is today. Also, Punk and Lawler are among the best in the business at the character side of professional wrestling, so it really worked out well.

I would have preferred if the WWE hadn’t aired the footage of Lawler being worked on by paramedics and taken in an ambulance (save that for when HHH attacks HBK with a fake sledge hammer, please), but it’s the WWE. You expect them to go a little too far with things.

Anyway, I just wanted to welcome back Jerry Lawler. We missed you, friend. Here’s to a couple more decades of singlets and crowns. Just please don’t wrestle any more cage matches.

**Kudos to Cult of Personality for living on for a new generation, btw.