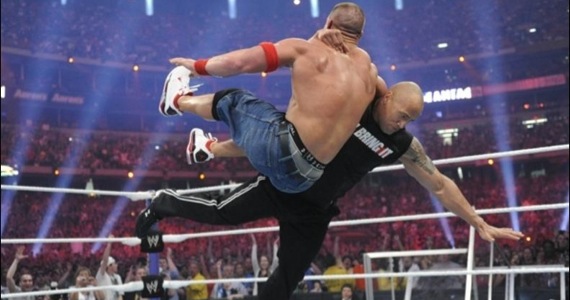 Last week’s round of shots went down pretty smoothly, so Jobu is back with some more for you!

We’re covering five different sports this week: boxing, basketball, baseball, football and even professional wrestling. We have controversial judge decisions, disbanding unions, disgruntled shortstops, lucky quarterbacks and the return of The Great One. Here’s some musings from the week that just ended.

So this technically happened two weeks ago, but it was late in the week, and I wanted a chance to watch the fight again before i made my final judgement on the controversial decision victory. When I originally watched this fight, I thought Márquez had it won easily. Granted, I was watching an online stream that kept getting screwy, so I missed a couple of rounds (not paying for stuff still rules), but I was pretty shocked with the decision. I thought Márquez won four of the first five rounds easily. Pacquiao finally seemed to wake up in the 6th, but I thought rounds 6-11 were close enough that Márquez still won at least three of them. Márquez kind of stayed away in round 12, which many say cost him the fight. By my count, Márquez still won seven rounds, which makes him the new Champ in my eyes. The 38-year-old may have fought the fight of his life. He solved the man everyone has been trying to solve for years. The evidence that Márquez was heading to a championship was all over Pacquiao’s corner in between every round. Freddy Roach kept trying to hype Manny up for the knockout, pointing out again and again that they were losing the fight. At the final bell, Márquez exploded in joy and Pacquiao looked like someone had just stolen his ice cream. In the end, the three judges scored the fight 114-114, 116-112, and 115-113 in favor of Pacquiao. It was a close fight, the 114-114 wouldn’t have been the craziest decision in the world, but Márquez really did deserve the win (this was his third controversial decision loss to Pacquiao). Immediately after the fight, promoter Bob Arum offered Márquez a fourth shot at Pacquiao, an obvious ode to the fact that even he thought the decision may have been wrong… That’s Boxing for you.

Last week the talks between the NBA owners and it’s players’ union came to a screeching halt, putting the entire season at risk. Thus far, NBA games scheduled through December 15th have been canceled. The more devastating development is that the players’ union decided to disband so that the players could pursue a class action antitrust lawsuit against the owners (it is my understanding that, legally, they can’t sue for antitrust violations as a Union). Even in 1998, when a lockout canceled games until January, the union did not disband. This is because disbanding the union will potentially create a lot of problems. Sure guys like Kobe Bryant and Carlos Boozer won’t care. They’re rich. But what about those fringe NBA players that now have no union protection or money? They suffer the most, and I feel like many of them would be against this move. Meanwhile, David Stern threatened to void all contracts if decertification happened, but he hasn’t yet. Can you imagine 450 free agents?? That would be madness! Hopefully the billionaires and millionaires will quit their crying and have some kind of season, but it certainly isn’t looking good. Here’s a good article about the legal issues behind the decertification strategy.

One of the big rumors around Miami is that the Marlins want to fit Jose Reyes for one of their sinfully ugly new uniforms (we talked about them last week). The Marlins are well within their right minds to want this. Reyes is one of the best players in the game, he’s still under 30 and he’s hispanic (this will help greatly in Miami). There’s only one slight problem standing in the way of this storybook love affair. The Marlins are already married to a shortstop, and he’s one of the best young players in the game (despite a terrible 2011 season). Jose Reyes is the other woman in this relationship, and the Marlins will try to make every married cheater’s dream come true. They’ll try to ask the wife to move over to make room for the new woman so that all three can live together in harmony. Stay with the metaphor for a second as I explain. The Marlins would ideally like Hanley Ramirez to move to third base for the foreseeable future to make room for Reyes at short. In the long run, it’s probably the best move. Ramirez’s bat profiles more for third base, Reyes is a great shortstop and the Marlins’ lineup would get an amazing boost from having Reyes. Furthermore, Ramirez would benefit from less of a defensive workload and also from having Reyes getting on base a lot in front of him. The only thing that could stop this move is if Hanley’s ego decides he doesn’t want to accommodate the Marlins’ other woman. In the end, he should move because it helps everyone and gives him a chance to be a winner.

Now I didn’t get to actually see this because Cablevision hates its customers and refuses to carry the NFL network, but apparently Tim Tebow somehow led his Broncos to victory against the Jets last Thursday. If you’re counting at home, that’s three wins in a row for Tebow, and four in the last five games. The people in Denver are already chugging the cool-aid, and Tebow is the talk of the town, and the NFL. Tebow went from being way too lucky against the Dolphins last month, to now having a knack for the victory drive. That’s what happens when your defense keeps teams close enough for you to pull a couple drives out of your ass and win the game. In his 4 victories, Tebow is 34-76 (44%), 458 yards (114.5 per game), and he had one win in which he completed two passes the entire game. Two! I will give him props for his six touchdowns and no interceptions in those games. Not turning the ball over certainly helps win ballgames. He has also done a great job with his legs during these victories, carrying the ball 39 times for 288 yards and two more Touchdowns. So, yes, I am impressed at his ability to lead big drives late in games, and his ability to not completely ruin games by turning the ball over, but without his running backs and the Denver defense, he could easily have lost the last five weeks, instead of just one of those games. I mean winning is everything, but let’s make sure we’re crediting all the right people when wins happen.

The Return of “The Great One”

For those of you who didn’t know, WWE held its annual Survivor Series Pay Per View event last night in Madison Square Garden, New York City. It was fifteen years ago at this same PPV that Dwayne Johnson, AKA The Rock, made his WWE debut. Last night’s Survivor Series marked the first time The Rock stepped into a WWE ring in seven years. He has pretty much graduated to full on movie star status now, so it was kind of a treat to see him reenter the ring. Truth be told, it really felt like he never left us. The crowd went bonkers for him the whole time (while booing his tag team partner John Cena), and The Rock managed to hit all of his signature moves, including the Rock Bottom and the People’s Elbow. All in all, a great return to action for one of the greatest WWE superstars of all time. Because of his movie career, I’m curious to see long Johnson will stick around the WWE (he does have a scheduled match against John Cena at Wrestlemania XXVIII on April first in his home town of Miami, FL). However long he is here, I’m sure it will be electrifying, and sigh… the People’s Elbow is still cool.