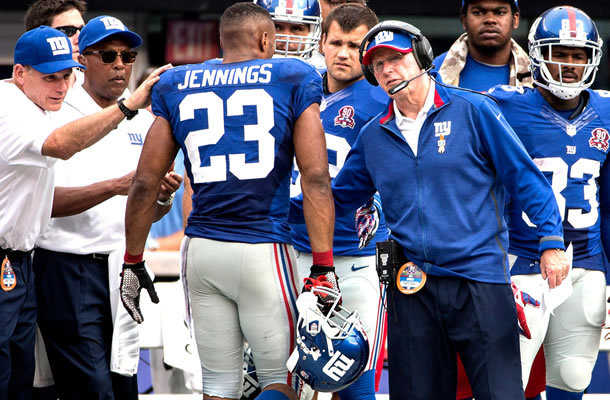 Not even Ryan Fitzpatrick‘s Beard could get in the way of Giants victory this past Sunday, as the G-Men rolled to a 30-17 win against the Houston Texans. It was the Giants first win after an 0-2 start, and it came a full month earlier than their first win last season. Eli Manning and Rashad Jennings played brilliantly in the win, and the defense looked a lot tougher than they had in the other games so far this year. It was a total team win that had Tom Coughlin yippeeing and yahooing all the way through the post-game presser. Let’s get into some more details, shall we?

Ben McAdoo’s new offensive game plan was met with some scoffs when the Giants announced they would be switching to more of a West Coast offense for 2014. McAdoo got even more guffaws when it was revealed that he had challenged Eli to complete 70% of his passes this season. Did he realize what roster he had inherited? Did he watch any Eli Manning games last season? I mean good lord! Eli had never completed more than 62.3% of his passes, and the 11 year veteran led the league in interceptions last year. After the first game of the year, those guffaws turned into full on belly laughs, as Eli looked like the same lost little pup that cried his way to an 0-6 start last year. Well, slowly but surely, Manning, McAdoo and the offense seem to be turning things around.

Eli, who played decently in the Giants’ Week 2 loss, but still threw 2 picks, had his best game in a couple of years against the Texans. He completed 21 of 28 passes for 234 yards and 2 scores, helping the Giants overcome a shaky start that involved a red zone fumble by Larry Donnell and a horrible snap by Zak DeOssie on a Field Goal attempt on the team’s first two drives. Manning’s first TD pass came on a beautiful 26-yard catch and run by Victor Cruz, who scored his first TD since Week 4 of last season–a span of 357 days. Cruz also had a 61 yard catch and run on the day, and caught 5 passes for 107 yards overall. Eli’s second TD pass was a 7-yarder to Tight End Daniel Fells that helped pretty much put the game away in the fourth quarter. It was a brilliant throw on a brilliant day for Manning and his receivers.

Not to be outdone, Jennings had one of the better days by a Giants Running Back since the days of Tiki Barber, carrying the ball 34 times (34!) for 176 yards and a TD. It was, by far, the best game of Jennings’ career, and no Giant had carried the ball more times since Joe Montgomery‘s took the pigskin 38 times against the Jets in 1999 (although Montgomery only had 111 yards on the day). What a game for the Liberty College product.

All of this, of course, was due to the wonderful play of the entire offensive line. From Justin Pugh putting the clamps down on the $100 Million Dollar Man, J.J. Watt, to Will Beatty and Weston Richburg‘s fine efforts, the O-line was completely on point. It’s amazing what happens when the guys up front block people and give Eli and the run game time and space to do their thing. Kudos to all of them.

The way the offense got started in this one, we thought we’d need the defense to step up big time to help us win a nail biter. The offense got it going, which took the pressure off the D, but Perry’s boys played great anyway. The Giants held Fitzpatrick and the Texans, who were playing without starting Running Back Arian Foster, scoreless for the first 39 minutes; until Randy Bullock kicked a 27-yarder in the third quarter. Things got a little hairy after Stevie Brown lost receiver Damaris Johnson on a 44-yard TD just a couple of minutes later to make it a 17-10 game, but Eli would get rolling and put the game out of reach soon after. Brown really hasn’t been his explosive self since he tore his ACL in 2012, and was actually benched for Nat Berhe towards the end of this game. Here’s hoping he can get back to his old self soon. The rest of the Giants secondary played very well, as Antrel Rolle and Dominique Rodgers-Cromartie both picked off passes in this one. You can see Rolle’s above.

The defensive line was pretty brilliant in this game too. Jason Pierre-Paul was great against the run all game, as were Robert Ayers and Johnathan Hankins up front. Even Mathias Kiwanuka was playing with some ferocity, showing that his strong preseason just might not have been a fluke. “The Next Big Thing,” Damontre Moore even blocked a punt that set up a TD. Overall, it was a banner day for the D.

Overall, the Giants looked great in this game. Sure, the Texans’ biggest offensive weapon, Foster, didn’t play, but this is still a solid offensive squad, and the Giants manhandled them for most of the game. The Giants offense, meanwhile, rolled right over a defense that features one of the best players in the NFL in Watt. Coach Coughlin pushed all the right buttons, and the offensive line gave Manning the time to truly take advantage of McAdoo’s new offense. All of these things contributed to the big win, and I’m hoping the team can keep building on their successes. They have a very tough matchup, and a quick turnaround, coming up against the Redskins on Thursday, so they’re going to need to stay sharp to keep make an official winning streak possible.

Go to Pro-Football Reference for the boxscore and statistics. I’ll be back next week with another review.